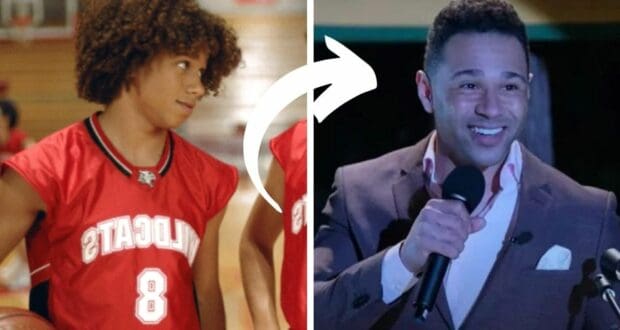 Ever since the year 2006 when the Disney Channel Original Movie High School Musical first debuted, the franchise has had devoted fans who are drawn to its catchy original songs, dance numbers, and vibrant high school atmosphere. The franchise has continued with High School Musical: The Musical: The Series on Disney+, and the show’s new season apparently features a fan favorite from the original movie: Corbin Bleu!

Disney+ has just released a first look at season three of the show, and that first look includes Corbin Bleu’s long-awaited cameo. Several other Disney Channel alums are also in this season of the series, including Hannah Montana actor Jason Earles, who plays the lead camp counselor at the summer camp called Camp Shallow Lake. Meg Donnelly from the Disney Channel ZOMBIES films is also showing up!

“I can’t express enough how fulfilling it was to return to this world after all these years with a new perspective. We’ve got A LOT in store for you!” Corbin Bleu said in an Instagram caption. The singer, dancer, and actor played the sidekick of Troy Bolton (played by Zac Efron) in the first three High School Musical movies. His character Chad Danforth was a charismatic and mischievous basketball player.

Since High School Musical, Corbin Bleu has done lots of work on stage (including Mamma Mia! opposite Liv and Maddie star Dove Cameron) to show off his singing abilities. The newly-released clip from High School Musical: The Musical: The Series doesn’t include Corbin Bleu singing, unfortunately, but he does reveal the main plot of the season: the campers at Camp Shallow Lake are putting on a stage version of Frozen!

High School Musical: The Musical: The Series has become known for its characters’ relationships and its musical numbers (just like the original films), so it’s not surprising that an original High School Musical actor would be returning. If this scene is Corbin Bleu’s only scene in the show, however, some fans might be disappointed!

Season three premieres on July 27 on Disney+, with new episodes each Wednesday and a total of eight episodes. Now that we know season four of the popular Disney Branded Television show is also on its way, a marathon is in order!