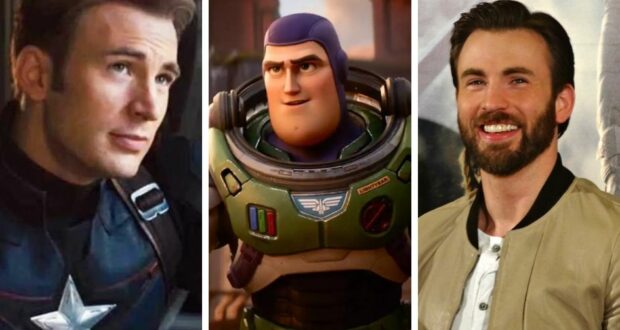 Chris Evans is voicing the astronaut Buzz Lightyear (whereas Tim Allen voiced the toy Buzz Lightyear in the Toy Story films from Pixar) in the new Pixar Animation Studios movie, and his new intergalactic film has coincided with his birthday on June 13, resulting in a lot of heartfelt birthday wishes from fans of the actor. Ironically, Tim Allen’s birthday is also on June 13!

Some of the Avengers actor’s co-stars from previous films also shared happy birthday wishes for Chris on Instagram. Mark Ruffalo, who plays Bruce Banner (aka the Incredible Hulk) in the Marvel Cinematic Universe, said the following: “Wishing my bro and current fashion king, @chrisevans, the happiest of birthdays! 🎂🥳 From Captain America to Buzz Lightyear, you always crush it in a suit”.

Academy Award-winner Octavia Spencer also shared a happy birthday post for the actor, who turned 41 on June 13. “Today my dear friend, Chris Evans, was born. Here are things you should know,” Spencer said on Instagram. “He’s s generous. No matter how large the group or where you are in the world, if you’re dining with him, he sneaks off to pay the check. So, if you EVER want to buy him dinner, make those arrangements beforehand”.

She also added that Evans is a very “good dancer” who is also “brilliant at running charades” and loves game nights. “He’s one cool dude and I love him,” she added, finishing with a recommendation that birthday wishes be sent to the 41-year-old with “lots of punctuation and emoji’s” (presumably in a sarcastic way).

Chris Evans has been gearing up for the press tour before the premiere of Lightyear on June 17, with interviews that include what is presumably the famous Buzzfeed puppy interview (an interview which is particularly perfect for the Knives Out actor, since he is known for his love of dogs). Evans shared a peek of the said interview in the Tweet above.

Chris Evans is joined by Thor: Love and Thunder director Taika Waititi and the actresses Keke Palmer and Uzo Aduba in Lightyear. Are you excited to hear Chris Evans voicing Buzz Lightyear in the new movie from Pixar Animation Studios?