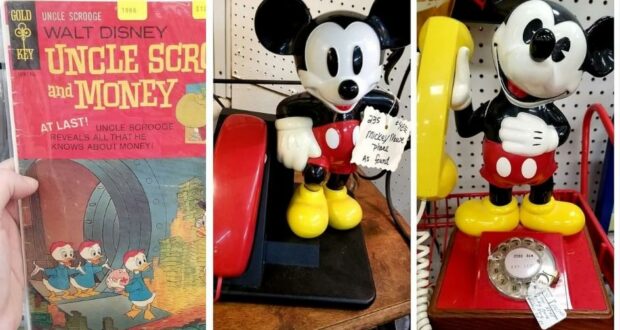 In Search For More than the Disney Store: Disney Antiquing

In the past few years, many of Disney’s flagship stores have closed, robbing die-hard Disney Fanatics of a magical in-person shopping experience. This left saddened shoppers with a single question: where is the best place to find Disney merchandise? Previously I looked into the best Disney finds at the local dollar store, discovering cheap fun finds perfect for kids of all ages. I then investigated what the best Disney treasures at your nearest thrift store might be, with a wide variety of unique possible results for Disney fans. But what about more serious collectors searching for vintage items and rare collectibles? For these fans, one should seek to explore their local antique mall.

For the uninitiated, antique malls are essentially shopping centers that allow shoppers to browse through a wide range of items considered to be collectibles. This includes both antique and more recent items of value to collectors. Various booths are arranged in a grid pattern, like office cubicles, each operated by an independent seller, possibly specializing in items like furnishings, clothing, jewelry, and even appliances. Other booths operate with a theme such as a specific decade, a seasonal holiday, or a specific media franchise. Star Wars memorabilia often have entire cases dedicated to them, as well as highly collectible Barbies. And in almost every one of these booths, one can find Disney treasures.

Here are our best finds: 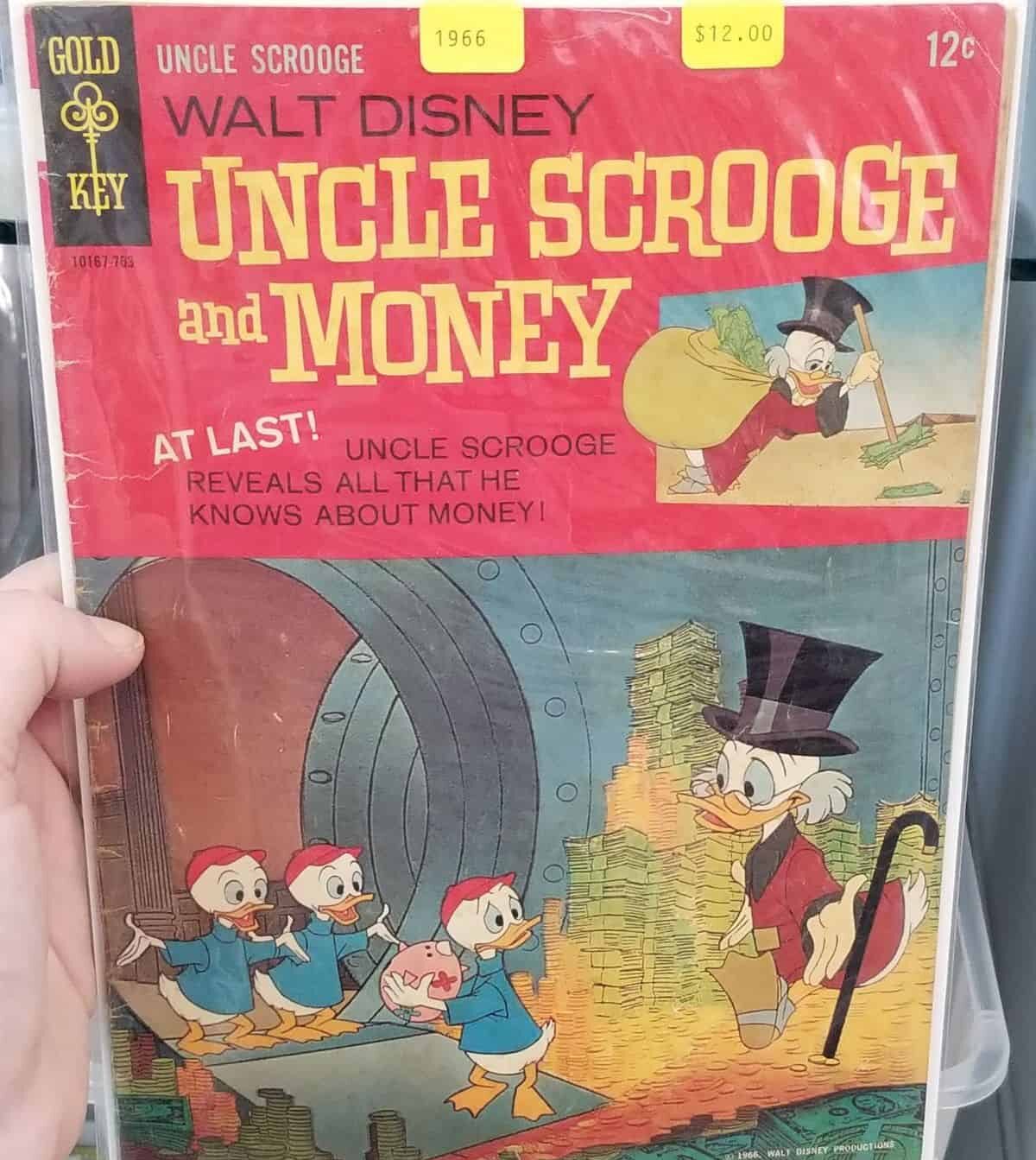 Antique malls can always be counted on for collectibles like comic books and vintage children’s books. This “Uncle Scrooge and Money” comic featuring Houey, Duey, and Louie is circa 1967–after the original comic book boom of the 1930s-40s and before the emergence of specialty comic book stores in the 1970s–and is in excellent condition.

This would make a definite fun addition to a Duck Tales fan’s library. 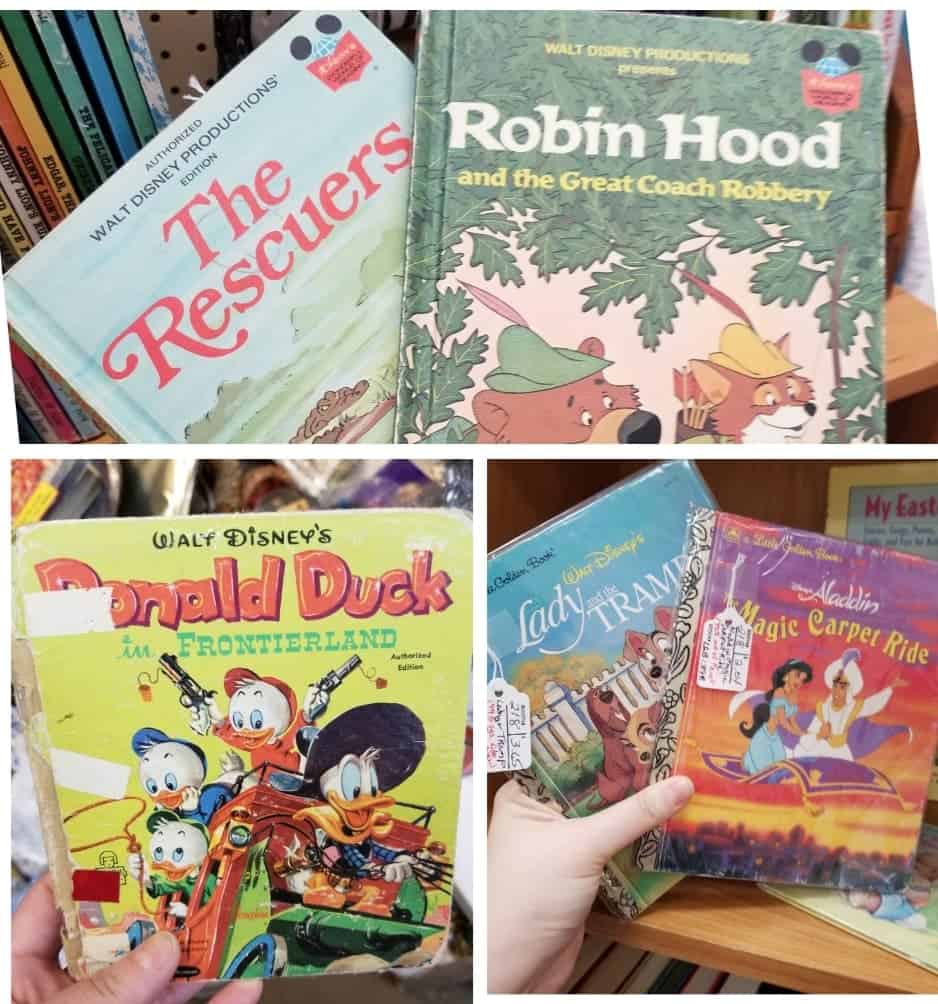 Little Golden Books has a similar history that goes farther back, with many Disney tales interwoven into their story:

When Little Golden Books were first published in 1942, high-quality books for children hadn’t been available at a price most people could afford. Little Golden Books changed that! Priced at just 25 cents and sold where people shopped every day, they caused an instant sensation and were soon purchased by the hundreds of thousands. Created by such talented writers as Margaret Wise Brown (author of Goodnight Moon) and Richard Scarry, Little Golden Books have helped millions of children develop a lifelong love of reading.

But the most interesting find of this group–at least, to this reporter–is Donald Duck in Frontierland. This book from 1957 goes back to a limited series of Disney Parks-inspired Donald Duck adventures which includes Donald Duck in Disneyland and Swiss Family Duck. 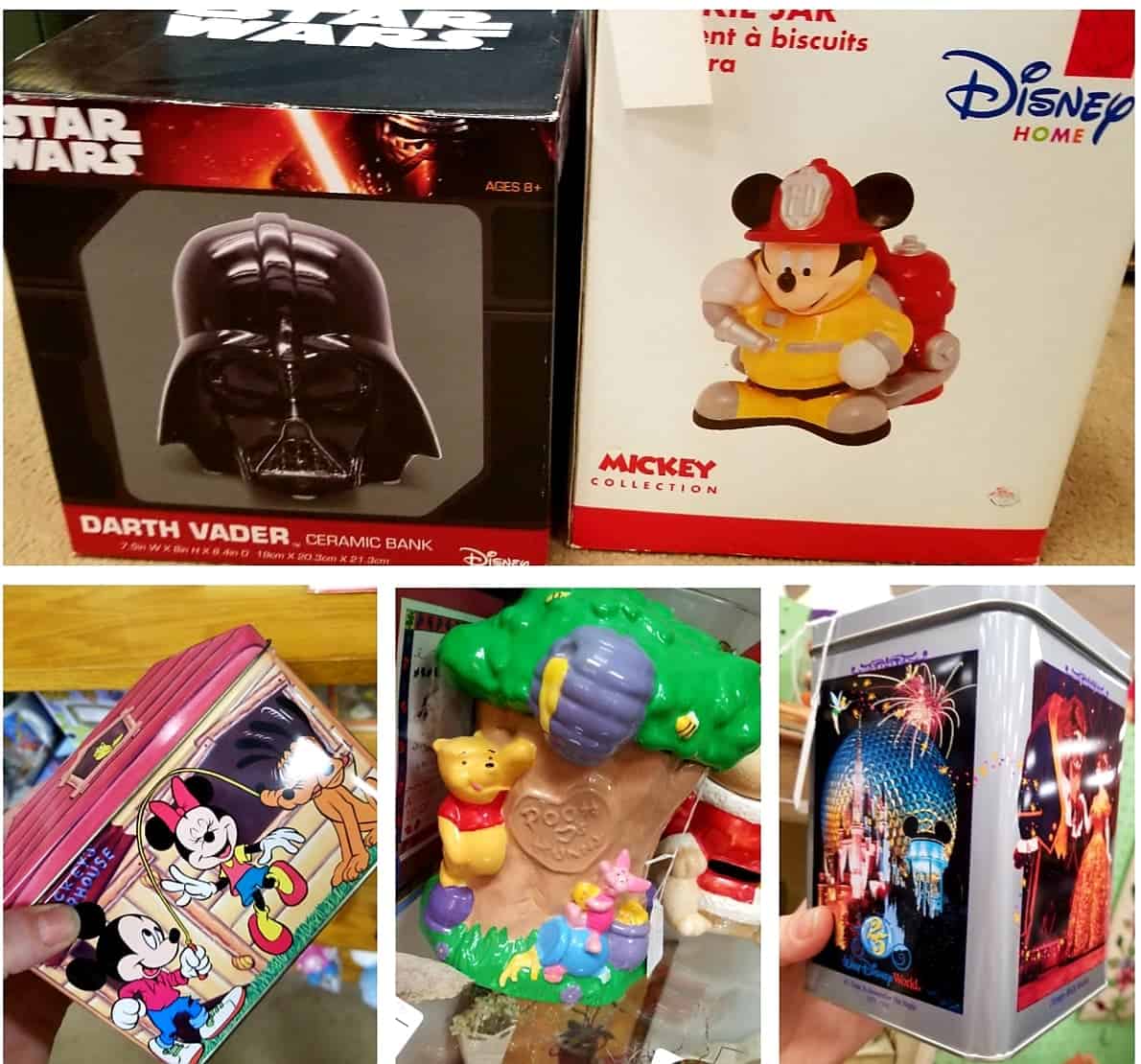 Disney cookie jars and cookie tins are common fun collector’s items to be seen at antique malls. These range from genuine vintage to more modern finds. On this particular shopping trip, I was able to find a collector’s Walt Disney World 25th Anniversary cookie tin from Nestle Toll House. 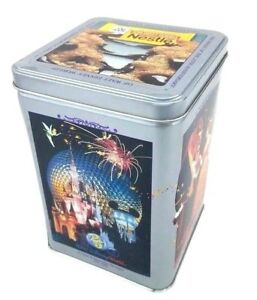 As Disney is currently celebrating its 50th anniversary, this was an exceptional find. The tin features photos of Disney World in the early 90s, including now-defunct landmarks and attractions. There is also a secret Chocolate Peanut Butter Mickey Mouse Cookie recipe on the inside of the lid. 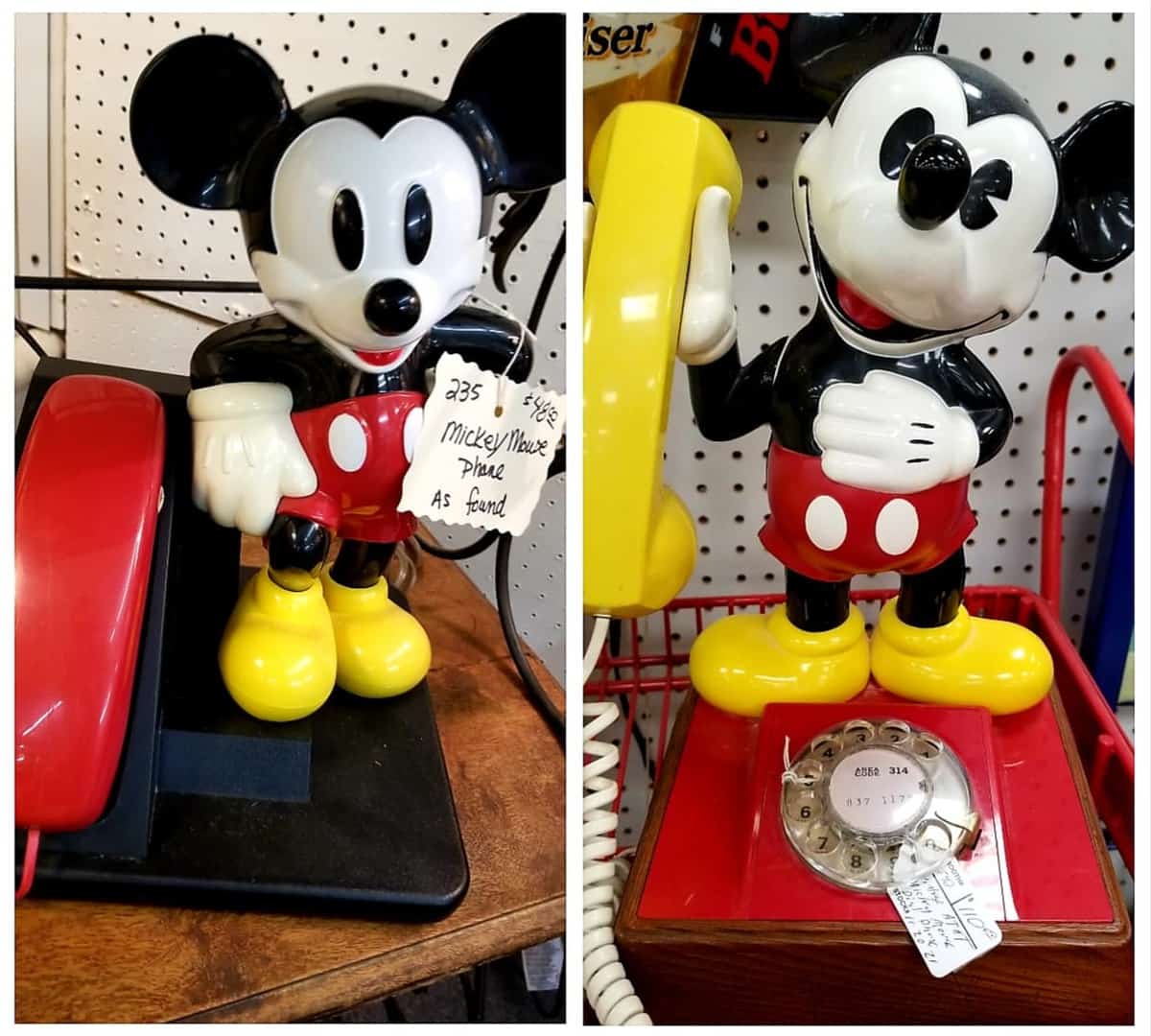 Other fun finds at antique malls are old phones, including rotary dial phones. For example, this 1976 rotary dial Mickey Mouse phone is an excellent collectible, perfect for the desks of die-hard Disney fans. 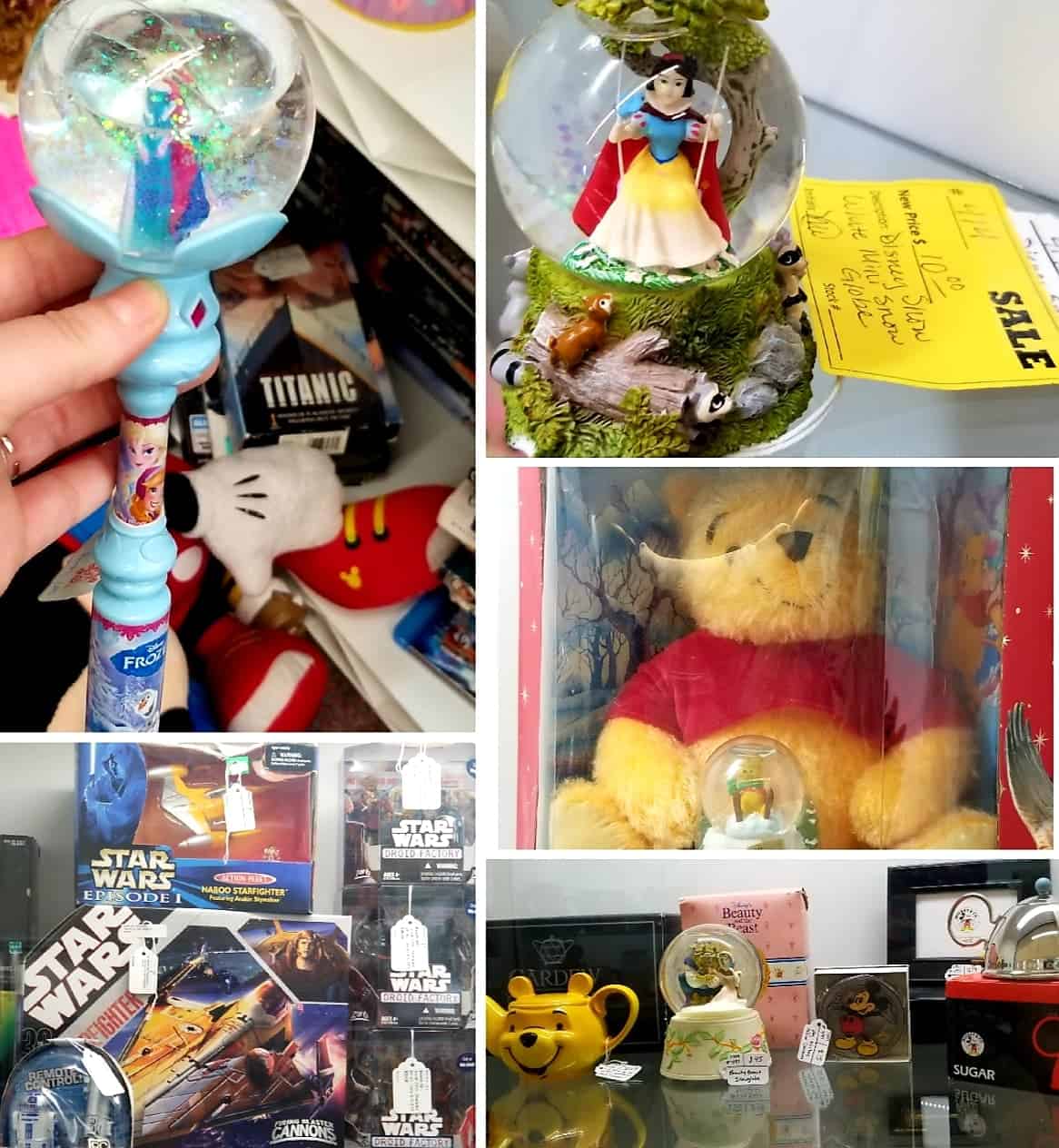 Like Cookie Jars, Snow Globes are classic collectibles and are staples of antique malls. Seen here are snow globes from Frozen, Snow White and the Seven Dwarfs, The Many Adventures of Winnie the Pooh, Star Wars, Beauty and the Beast, and the Disney Princesses. They are all in pristine condition, with some of them including their original boxes. Snow Globes are perfect features for the shelves of Disney homes, and they can be found among other classic collectibles like thermoses, commemorative plates, and vintage cups. 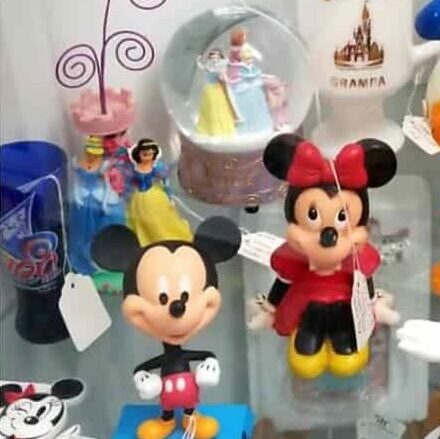 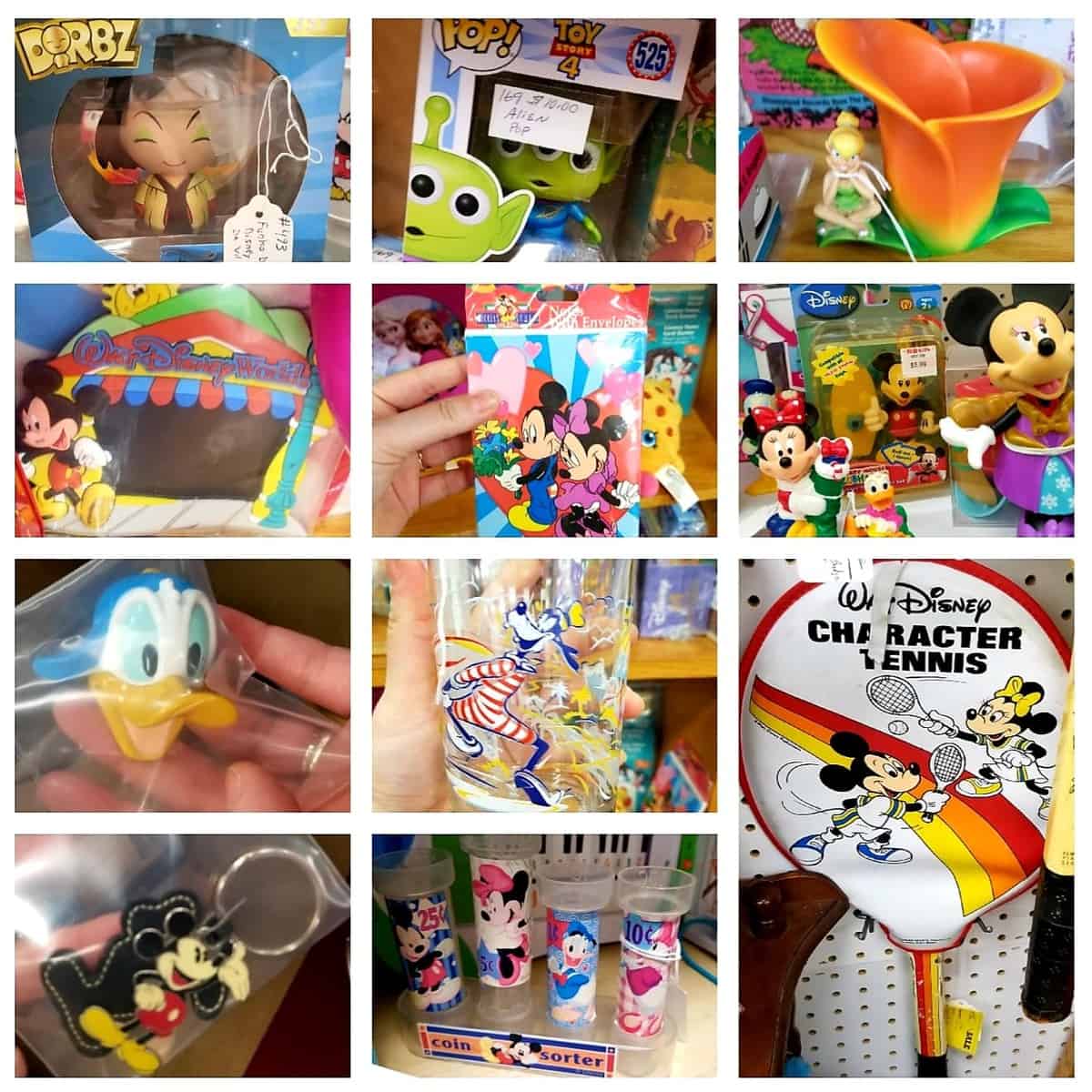 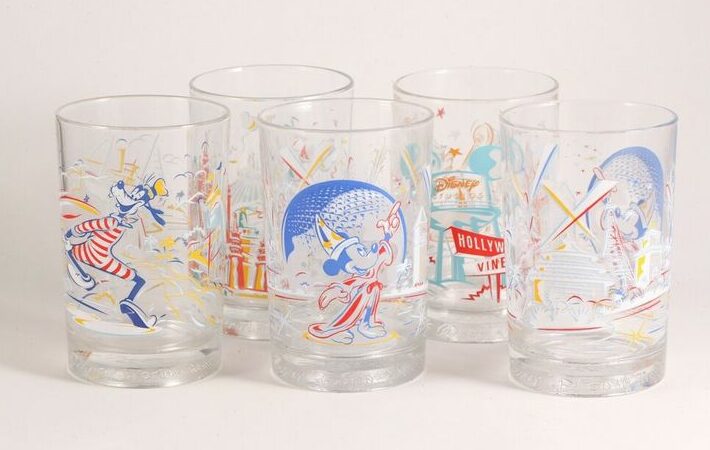 But my personal favorite find was one of the original 5 “Remember the Magic” glasses from Walt Disney World’s 25th Anniversary collection. Originally released in a joint promotion with McDonald’s, these glasses included depictions of Magic Kingdom, Hollywood Studios, and EPCOT and are a great time capsule of the parks at that time. Particularly, the glass featuring Goofy commemorated Disney World’s two water parks, Typhoon Lagoon and Blizzard Beach. 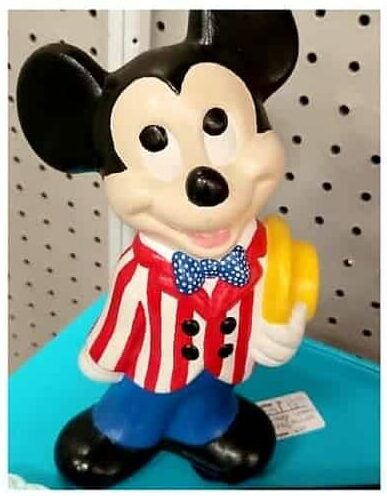 A very close second favorite find of mine is this stylish Mickey that pays homage to the famous Disneyland barbershop quartet, the Dapper Dans. 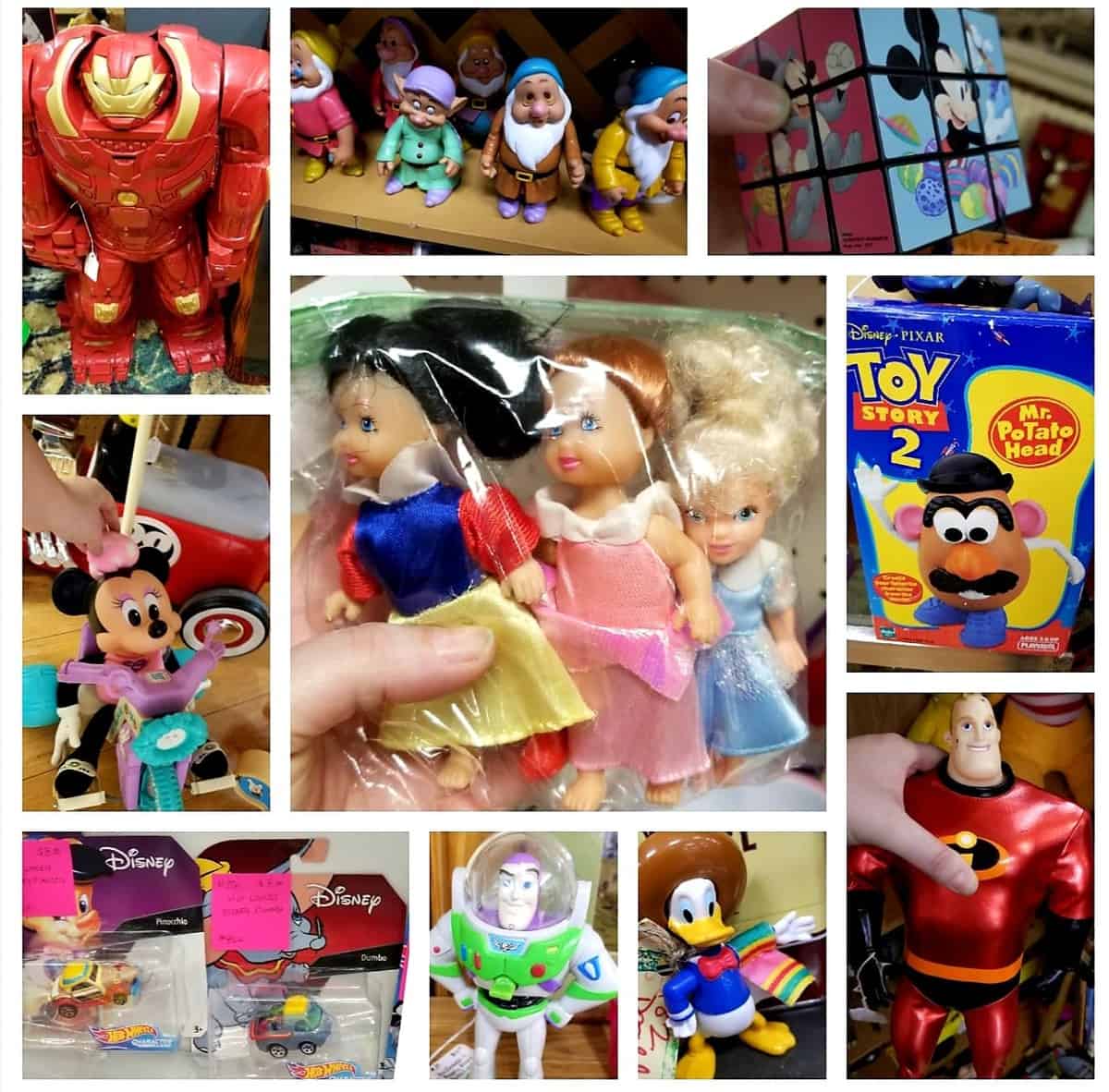 But we can’t talk about Disney shopping without talking about toys, right? We were able to find the Hulk Buster Suit Iron Man, all 7 of Snow White’s Dwarfs, a genuine Toy Story 2 Mr. Potato Head, and a The Three Caballeros’ Donald Duck all in one antique mall. But if you are anything like me, the really fun toys and games are found in Disney plush. 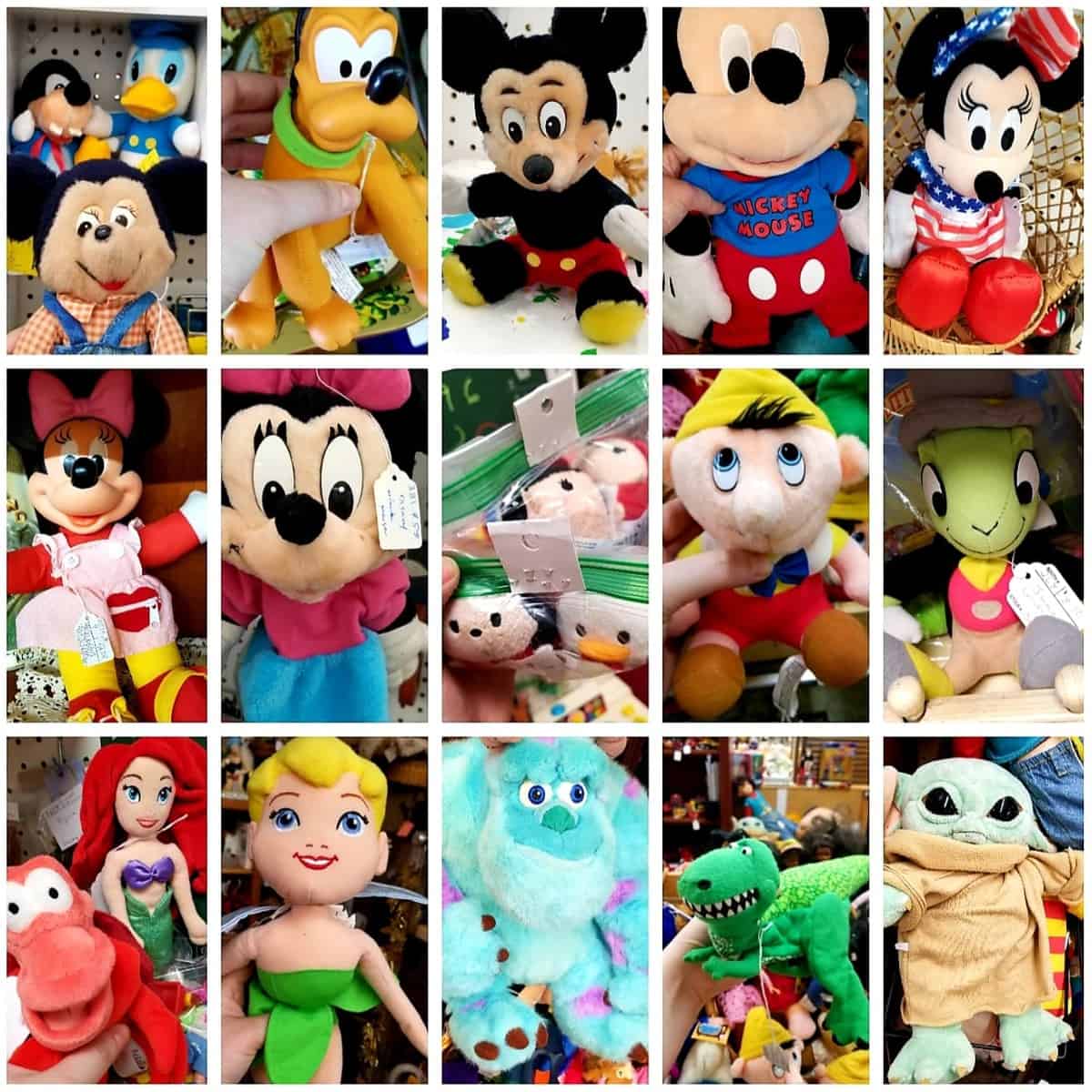 Often a lot of Mickey and Friends merchandise can be found at antique malls from a variety of decades. Fans and collectors can see the evolution of how Mickey was marketed to young children in his design over the years. More modern character plushies can often be found in booths as well, including highly collectible Tsum Tsums. But the real treasures are the very rarely seen characters, like the vintage Pinocchio seen above circa 1986. 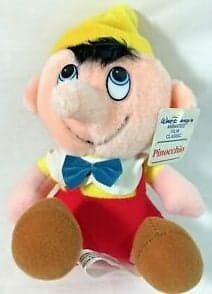 A few years ago, I never would have seen myself enjoying antique malls. But as a lover of deals and an avid thrifter, the Disney treasures from my local antique malls opened up a whole new world for me. And out of all of my in-person Disney shopping experiences, I genuinely enjoyed the rare finds at my antique mall the most.