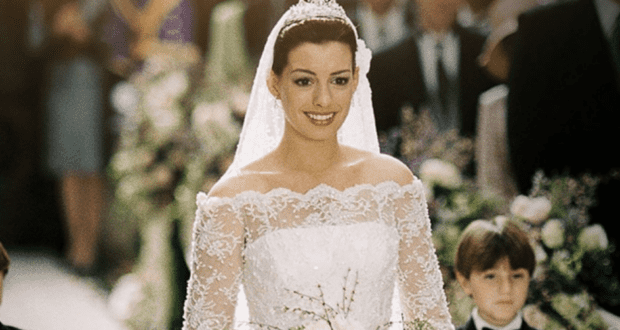 Get into Wedding Season with ‘Princess Diaries 2: Royal Engagement’

We have just entered into the month of June and what is commonly referred to as the start of the wedding season. Perhaps you even know someone who is getting married, and you and your family have upcoming plans for attending a wedding in the near future. Well then, how about taking this first weekend in June to get into the matrimonial mood with a movie night featuring a Disney comedy centered around a forced royal engagement and all the resulting mayhem that comes with trying to have a wedding in just one month?

For those who may be thinking that this very specific scenario sounds all too familiar, we are of course referring to that live-action throwback from Disney in 2004, The Princess Diaries 2: Royal Engagement.

After almost 18 years since it was first released in theaters, this second installment in The Princess Diaries franchise continues to be a lighthearted, entertaining watch. And we feel that given its nature, it truly makes the perfect nuptial-based recommendation just in time for the season. On top of that, the film packs in all the elements of a humorous family-friendly classic while also exuding that enchanted Disney Princess storybook feeling. So, get ready to “engage” in a very royal engagement with this featured movie pick on Disney+.

The story picks up five years after the first film ends when a quirky high school girl named Mia Thermopolis first learned that she was a princess set to become ruler of the faraway land of Genovia. Now as a recent college graduate, Mia is ready to assume her rightful place as Genovia’s queen-in-training, as the current queen — her grandmother, played by Julie Andrews — will soon be stepping down as monarch.

As if the prospect of still learning the ropes in royal living isn’t already enough, it soon comes to light that in order to be the official queen Mia must first be legally married or otherwise forfeit the crown per Genovian law. Making matters even more stressful is that she has just 30 days to get married — not to mention the prospect of falling in love, which has to be set aside given the immediate dilemma at hand. Now Mia has a difficult decision to make: settle for a suitor and hope that true love eventually follows, or give up a long-term goal that she and her grandmother have been working towards for several years. And it gets even more complicated when Mia starts to develop feelings for another fellow — one who may also be in line to claim the crown in the event that Mia does not!

Better Than the Original

While not always the case where sequels are concerned, The Princess Diaries 2: Royal Engagement actually outdoes the first film on so many different levels. Because the former focused almost solely on Mia adjusting to her newfound status as a princess, there wasn’t a lot of room left for much more than that. But in the sequel, all the precedents from the prior installment are already set in place, so we get to dive right in with a brand-new adventure continuing with an already established plot. And the short, simple explanatory summary Mia offers at the start of the film makes it possible for those who did not watch the first movie to follow along just fine with this one.

To put it bluntly, the first Princess Diaries movie also wasted far too much time dealing with adolescent pettiness. Not only did they really play up the insecurities of the main protagonist and her status as an ignored, overlooked unpopular girl, but they laid it on a bit too heavily in some instances. Another fact about the first film that doesn’t sit too well with some is the initial presentation of Queen Clarisse Renaldi as a prim, proper, and somewhat cold and unfeeling lady. Fortunately, the second film does not rehash either of the first one’s aforementioned discomforts, making it somewhat of a fresh start and a whole new entity that only improves on any deficiencies laid out in the former.

In continuation with the idea that The Princess Diaries 2: Royal Engagement offers up a fresh start of sorts is the fact that the story arc rebuilds into an all-new setting. In contrast to the first film’s basis in San Francisco, California, the sequel takes movie watchers on a fanciful journey to the faraway land of Genovia — a small European-based principality.

Because the location is an entirely fictional collaboration envisioned by Meg Cabot (author of The Princess Diaries book series), Walt Disney Entertainment got to actively play a role in the process they know and love so well: honing in on imagination in order to bring together a new, storied land for screen presentation.

Getting to experience the customs, culture, and scenery of Genovia is perhaps one of the biggest draws of the movie in addition to its plot. It is also perhaps one of the most obvious callouts to set it apart from its predecessor. Even though Genovia is not actually a real place, the film works wonders in its presentation of it, almost convincing you to believe that it does exist. But the fact that it does not creates an alluring, exotic appeal — which is a proven tactic for drawing in audiences who find fanciful fairytale-like fascinations with what is uncommon or foreign, such as a faraway land.

Related: Here’s How You Can Go to the Real-Life Destinations That Inspired Disney

A Cast That Carries the Show

In addition to providing a lighthearted, humorous presentation in the plot, another area in which The Princess Diaries 2: Royal Engagement exceeds is in its versatile cast ensemble. It’s a known fact that the existing quality of any production goes up in value when Julie Andrews is at the forefront. And the fact that she even gets in a singing number in addition to making a carefully laced Mary Poppins reference to having “done a lot of flying in [her] time” really helps in reaffirming the Disney charm.

The Princess Diaries movie franchise in general also marks the first big break into the Motion Picture Industry for actress Anne Hathaway, who has since gone on to make a name for herself in many other film productions.

It’s also good to see that many returning favorites from the original make reprisals in this one. Additionally, the second installment welcomes in many new faces, including several plucky players that add elemental comic relief to the plot, like maids Brigitte and Brigitta, Lionel the security guard, and others. And then there are Mia’s potential love interests who are not to be overlooked!

A Happily Ever After

What could be a rather tense situation — learning you must marry in 30 days — somehow gets miraculously resolved in the end, following in true “happily ever after” Disney fashion. While the plot does have its fair share of obvious predictability, it is equally balanced out by the right amount of unexpected charm as well, making it the perfect enjoyment for those who like familiar territory with a few feel-good surprises thrown in. That alone solidifies the status of this movie as a modern Disney classic.

Related: This Legendary Disney Actress Has A Cinderella Movie That You’ve Never Heard Of

The Princess Diaries 2: Royal Engagement is the perfect family-friendly pick to consider just in time for wedding season. Additionally, you can stream both it as well as its predecessor, The Princess Diaries, on Disney+ for a most fitting movie marathon this weekend if you so choose. So, give your family the royal treatment in the way of a movie franchise that’s sure to make everyone feel regal.