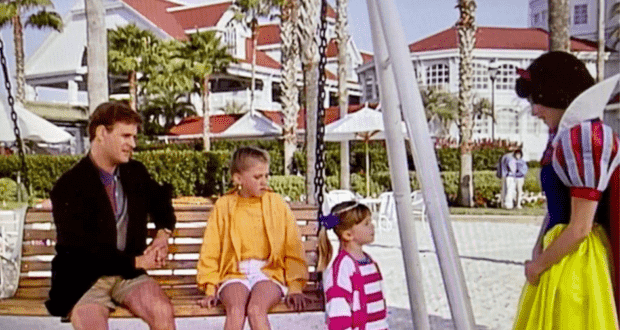 After the day is done, many folks like to unwind in front of the T.V. with a funny, laugh-out-loud family-based comedy. Likewise, most people dream of experiencing the magic of a vacation to Disney Parks at least once in their life. So, when you get to see some of your favorite fictional families from well-loved shows embark on their very own trips to Disney World or Disneyland, it makes for an even more unique viewing experience. It’s as though you are joining along with them on their own storied adventures.

Throughout the years, we’ve had the pleasure to experience several instances when the television shows we love so much have released a Disney Parks special episode. This is especially the case where ABC shows are concerned, given the obvious partnership/ownership.

From the early 90s onward to more recent renditions, we’re taking a look at the many times when your favorite television shows took to Disney Parks for special episodes.

Back in 2019, ABC’s 1980s-based family comedy show The Goldbergs opened its seventh season with an episode centering around a trip to Disneyland Park. The synopsis of the episode focuses on Mom Beverly leading the group in one last big family vacation together prior to the start of college life for two of her kids. In truth, screen time featuring the Park is disappointingly short, as the bulk of the episode focuses on the road trip journey en route—paying homage to National Lampoon’s Vacation from 1983. All the same, there are many references made to the “new” Star Tours attraction (remember, this is set in the 1980s) and portended the potential of Disney someday building up an entire Star Wars-themed land. 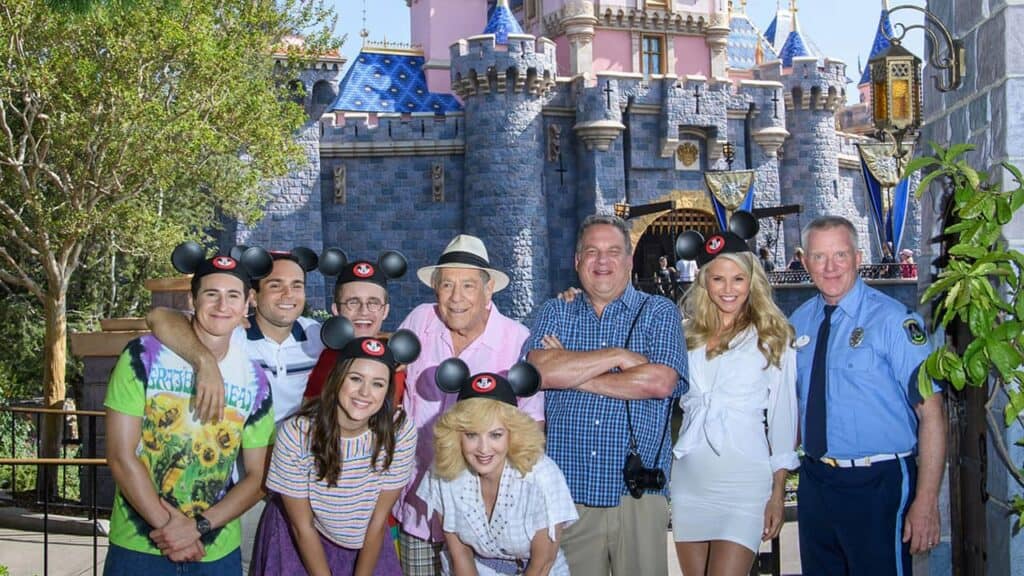 The ABC family comedy Blackish also opened one of its seasons with a Disney vacation-based episode back in 2016. In the episode titled “VIP,” Dre decides to take the whole family to the one and only Walt Disney World Resort. If that isn’t a treat enough, he decides to optimize the experience even more with VIP services. With his kids having first dibs on all the best rides and other members of the bunch off on their own Disney World adventures, viewers get to enjoy seeing a host of well-loved Disney Park attractions all across Walt Disney World’s four theme parks. 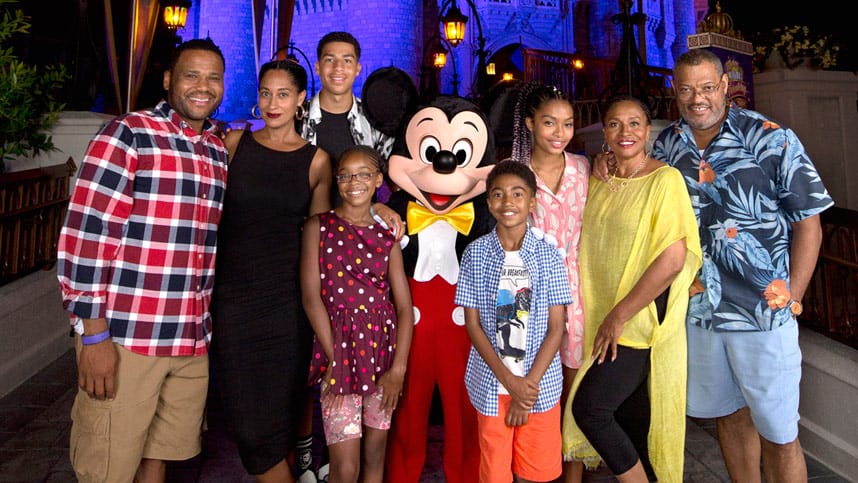 Even that forever misfortunate Heck family of ABC’s The Middle got to experience the magic of Walt Disney World at the conclusion of their fifth season back in 2014. The episode titled “The Wonderful World of Hecks” is part two of a two-part season finale that picks up where the preceding episode ends—the family arriving at Walt Disney World Resort only to find that their tickets were meant for Disneyland! But because Disney Cast Members are such wonderful folks, the family is permitted to experience Disney World just the same. But, in classic Heck misadventure style, even the magic of Disney gets a little muffled throughout the episode. It all turns out well in the end, though, and we get to enjoy seeing many of our favorite Disney Theme Park attractions featured at both Magic Kingdom Park as well as EPCOT. 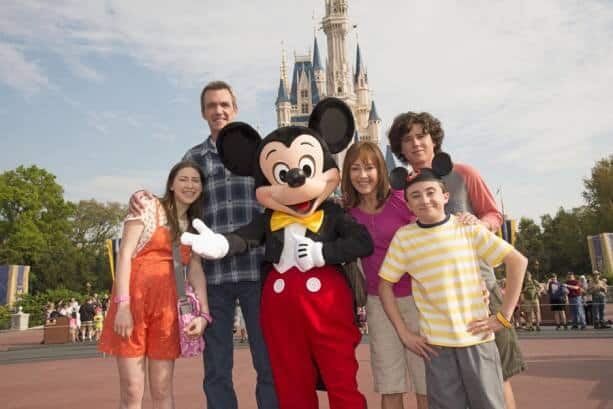 The long-running family comedy Modern Family also decided to go for the Disney Magic in episode 22 of their third season back in 2012. Rightfully named “Disneyland,” the episode follows the family on vacation to—you-guessed it—Disneyland Park in Anaheim, California. Being a zany, versatile bunch created the option for many different scenarios to play out all at once—from running into an old flame working as a Disney Cast Member to making sure your kids are kept on a short leash(sometimes literally) and riding all the countless classic Disney Park attractions in between, it is an excellent “modern” shoutout to Disney’s original classic Park. 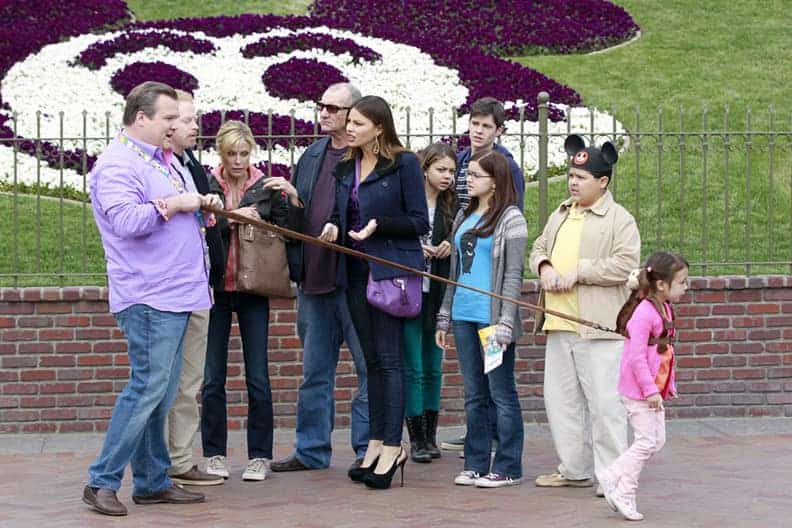 George Lopez and his family also visited Disneyland Park during the 2004 season of George Lopez in the episode “George Goes to Disneyland.” After his son Max wins an award at school, George’s wife Angie decides to celebrate with a planned trip to Disneyland. Reluctant to join the rest at first, George eventually decides to experience the magic for himself, along with countless classic Disney attractions and a host of laugh-out-loud situations along the way. 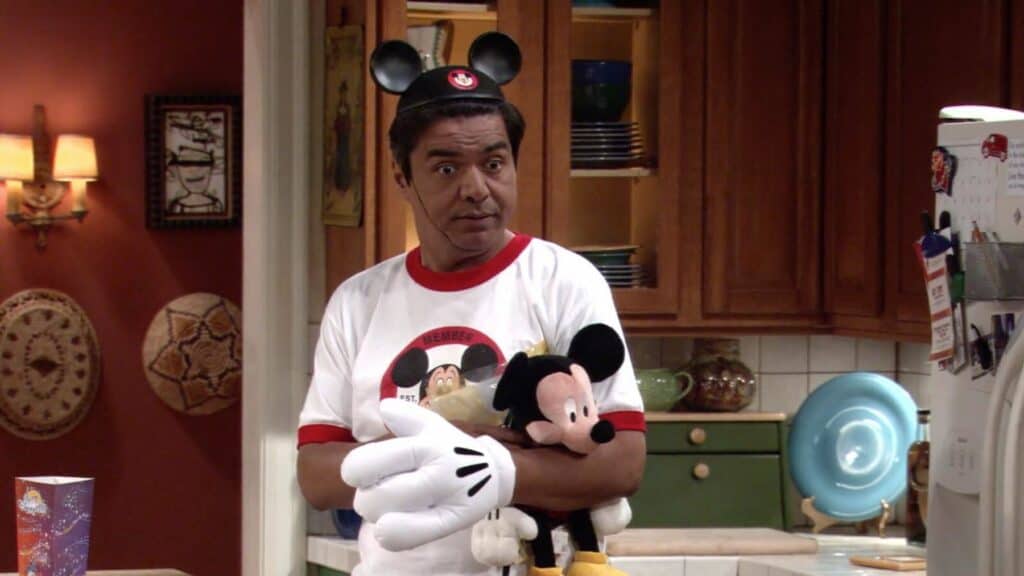 The second season of the ABC comedy Sabrina the Teenage Witch took the titular protagonist along with several other characters to Disney’s own Animal Kingdom Park in the episode “We’re Going to Disney World” from 1998. The premise follows Sabrina, several of her classmates, and adult chaperones on a school trip to Walt Disney World Resort’s newest Park—Disney’s Animal Kingdom. This Disney Park episode is special in that it was filmed on-location before the Park’s official grand opening and premiered just two days following Animal Kingdom’s Earth Day debut. By watching it, you get to see beloved attractions like Kilimanjaro Safaris, The Boneyard, and many other callouts, both protected and extinct. You’ll also be laughing along with many humorous happenings in the way of witchcraft, like fellow classmates being transformed into zebras! 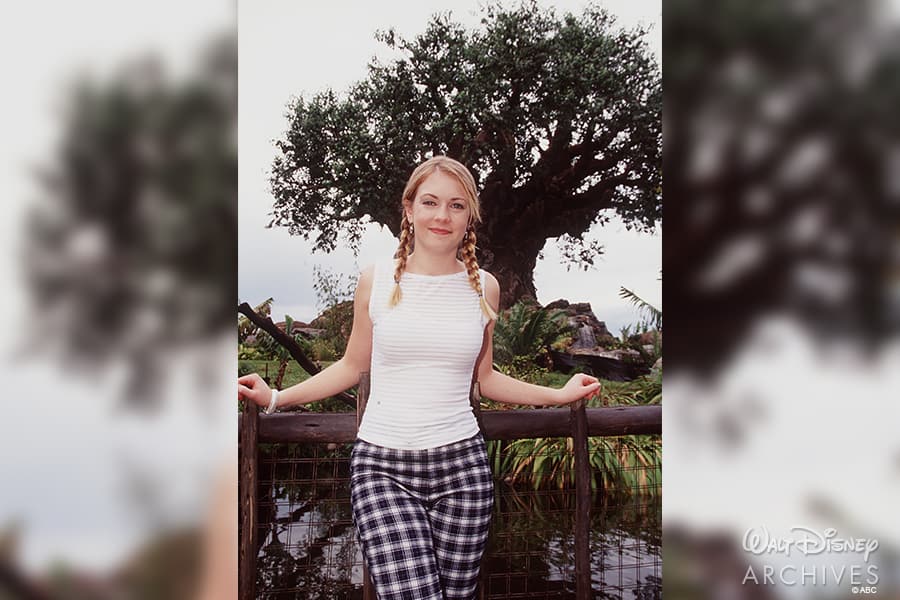 Back in 1996, during its third season, the popular family comedy Boy Meets World came out with the episode “The Happiest Show on Earth.” Topanga wins an essay contest, with the grand prize being a trip to Walt Disney World Resort. Even though he’s not supposed to be on the trip, Cory follows along with Shawn in hopes of confessing his love for Topanga once and for all. 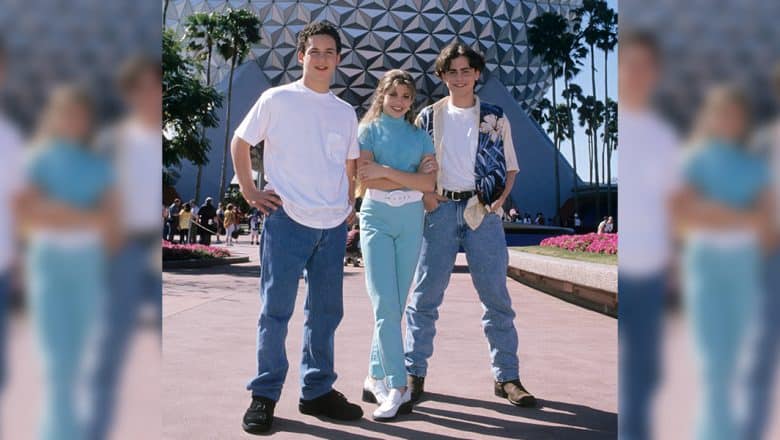 Throughout the episode, we get to see many iconic sights throughout Disney Parks, including Splash Mountain (which supposedly served as Cory and Shawn’s “Resort” accommodations) and many callouts within EPCOT. We even get to see characters like Goofy as well as the Beast. And who can forget that classic swim-by scene where Corey is trying to get Topanga’s attention from the aquarium encompassing the Coral Reef Restaurant? 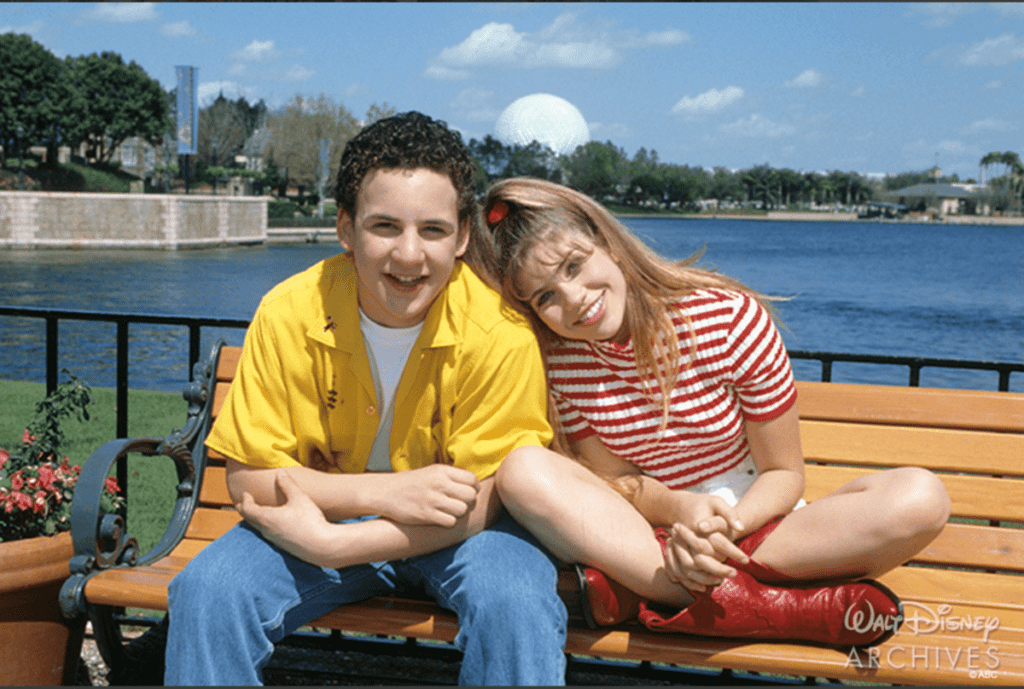 Even the Conner family took to the Magic of Disney back in 1996, during season eight of their comedy series Roseanne. While the bitter-sweet story arc that ultimately results in the family getting to take a vacation to Walt Disney World Resort covered two episodes—17 and 18—the first one was largely consumed by the adventures of traveling to their destination. It isn’t until the second part, “Disney World War II,” that we actually get to see them enjoying the Disney Parks and all the attractions that come along with it. And we see plenty, from Dan’s need to hit up EPCOT after finding out that the Magic Kingdom doesn’t serve beer (at least back in 1996, they didn’t) to even the most cynical members of the family warming up with Character Meet and Greets. It’s a television special that breaks with the show’s usual less-upbeat presentation and replaces it, at least for a moment, with the mutual magic Disney bestows on all families from all different walks of life. There’s no denying that the year 1996 was certainly the peak time for ABC family sitcoms to go on vacation to Walt Disney World Resort. That was also the year when season five of the blended family comedy Step by Step held its two-part episode rightfully named “We’re Going to Disney World.” Being such a large, versatile clan of characters endowed with an hour’s time slot as opposed to the usual under-30-minute run allowed them to create multiple occurring story arcs and adventures happening simultaneously. From Frank and Carol struggling to find some alone time to JT and Rich blowing their savings at Magic Kingdom Park, Karen’s competing in a singing contest at Pleasure Island to so many other action-packed pursuits. It’s such a diversely patterned episode arc that Disney World lovers can’t help but love for all the callouts. 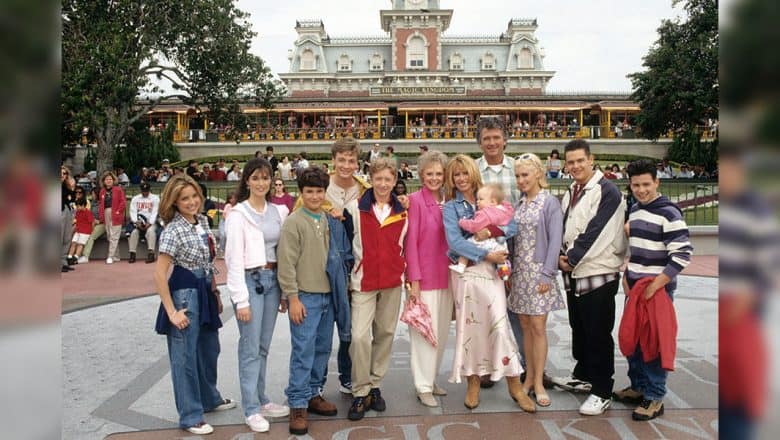 Everybody’s favorite nerd of the 1990s, Steve Urkel, also got to experience some Disney Magic back in 1995 during season six of Family Matters, as a result of having won his own trip for his brilliant transformation chamber invention. He generously invited the whole Winslow family along, and they take viewers along on the two-part episode “We’re Going to Disney World.” As the story plays out, we get to see many of our favorite attractions, both past and present, and revisit “the olden days” when Disney’s Hollywood Studios was still Disney-MGM Studios. 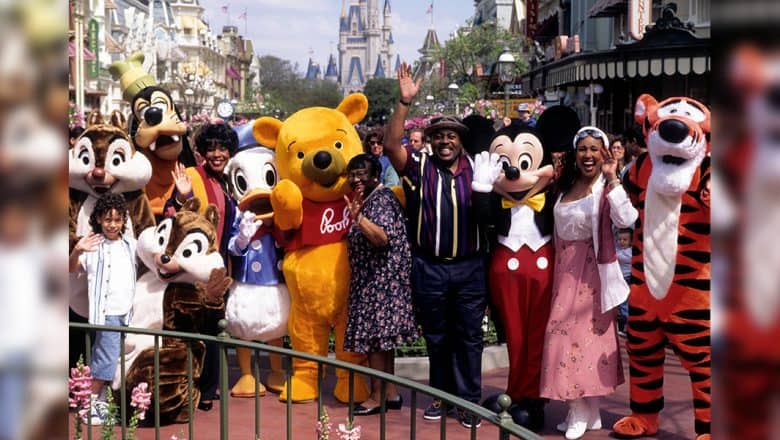 Perhaps the most memorable sitcom to head to Walt Disney World Resort, however, was Full House. In 1993, season six features the iconic two-part episode, “The House Meets the Mouse.”  This is, hands-down, the one that people remember most and was arguably the trendsetting show that set the stage–and standard–for so many other ABC family shows to follow suit. And because it is such a “full house,” there are many different characters to follow throughout the adventures of navigating the different Parks. You also get to see the Grand Floridian Resort & Spa in all its splendor (would the Tanner Family really stay anywhere else?). 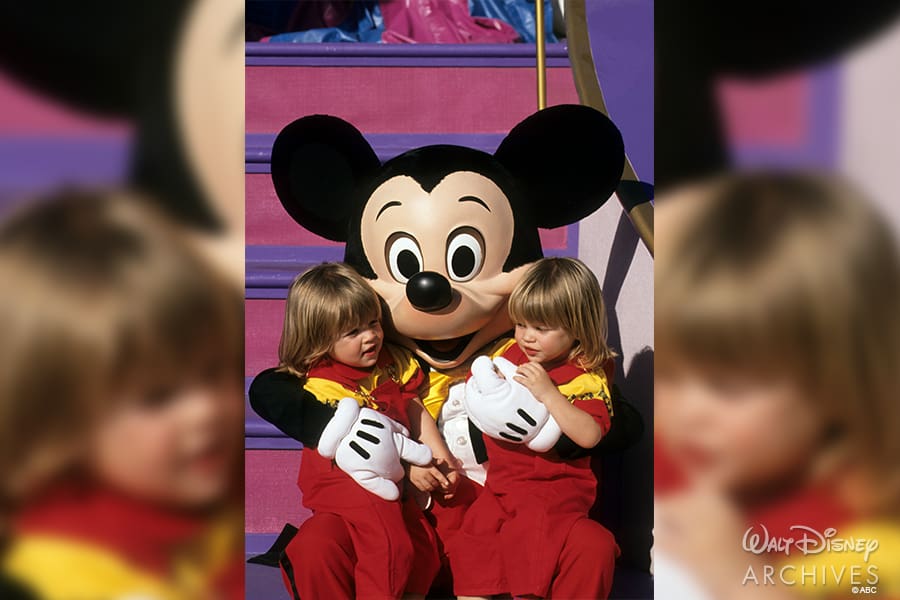 The episode covers all three Theme Parks that existed at the time, showcasing different attractions and sights to behold, including The Coral Reef Restaurant in EPCOT, the now-extinct Magic of Disney Animation studio (where Joey meets up with his old friend—real-life animator Mark Henn), and several others. Because DJ spends the bulk of the episode obsessing over her boyfriend Steve, she sees him everywhere they go, including the Indiana Jones Stunt Show, and, appropriately enough, appearing as Aladdin (note: actor Scott Weinger who portrayed Steve, also provided the voice for Aladdin in the 1992 animated film). From places to parades, rides to fireworks, the Tanners’ trip to Walt Disney World Resort goes down as one of the most beloved times in sitcom history when such a magical vacation took place. 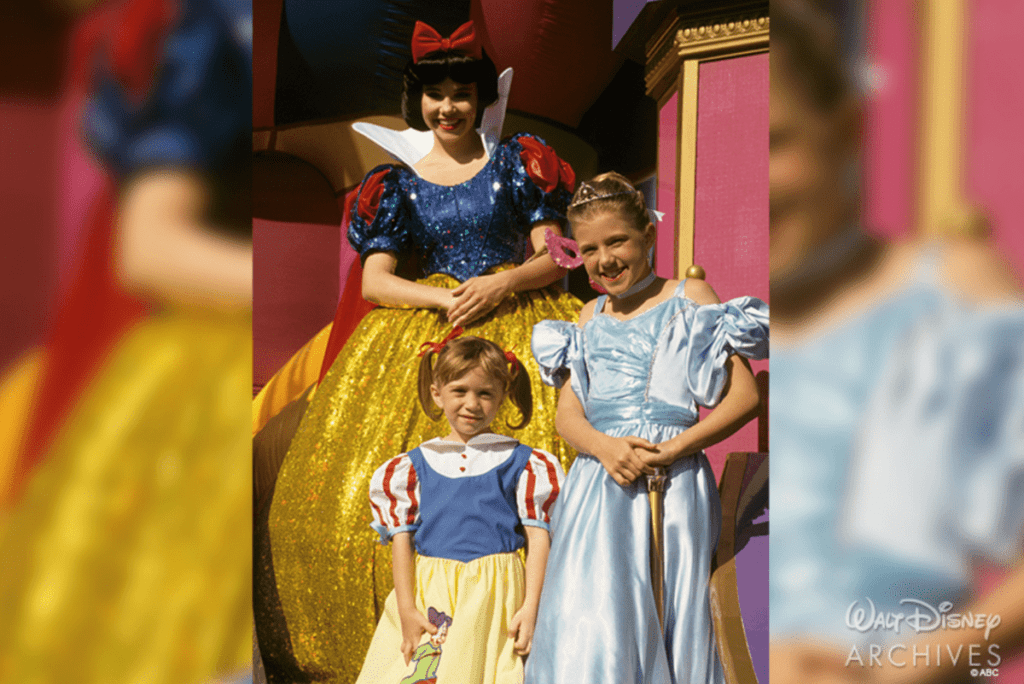 Related: What We Love Best About Disney’s Coral Reef Restaurant

For the most part, diehard Disney fans tend to truly enjoy seeing their favorite television families experience all the magic of a visit to Disney Parks. It should be noted, however, that given the fictional nature of T.V., deviations and inconsistencies are prone to pop up. From minor things like the absence of crowds at popular Character Meet and Greets to the ease of running from one Park to another in no time (and no mention of having ParkHopper). And let’s not forget about all those imagined-up non-existent experiences, like winning a promotion that lets you be a princess for a day. But because we love these shows so much and Disney Magic even more, we tend to let such deviant details slide as we sit back and enjoy the experience along with our favorite families on television.