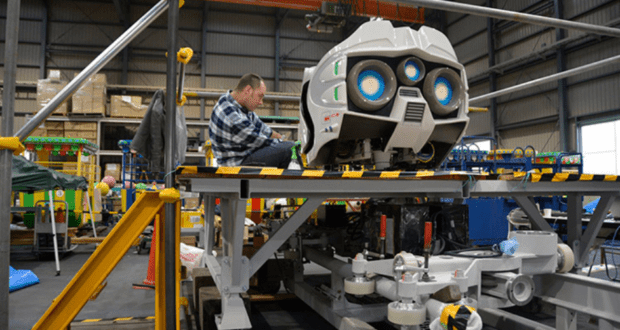 Have you ever wondered what it would be like to work as a Disney Cast Member? If you’re thinking of Cast Members as part of a “cast” in the way of performers or those who are part of the entertainment crew, then you would only be partially right. The Walt Disney Company’s use of the term “Cast Member” actually extends to include all those who hold positions working for Disney Parks and Resorts as well as in the Disney Store.

It goes back to a philosophy held by Walt Disney himself: that every task performed within the working sector of the Walt Disney Company helps to advance the overall story. And that is why the use of the term “Cast Member” broadly extends to include many different job descriptions.

You probably already know about several of the more obvious jobs at Disney Parks, from character actors to Park greeters and from hotel staff employees to those involved in food services. But there are a vast number of extended Cast Member jobs that you probably didn’t realize were available at Disney Parks, some of which you’ve likely never even heard of at all. Here are the 12 Disney Cast Member jobs you never knew about.

Disney Parks and Resorts around the world are known to dish up eye candy in the way of window displays. The lure for such presentations is so powerful, in fact, that we as shoppers can’t resist the desire to stop in and browse around a bit. You know what we mean. And it’s all thanks to the Cast Members making up Disney’s Window Display Team.

With their decorative powers of persuasion, Cast Members tasked with window display duties are kept busy, updating specific windows at various shops within the Parks as well as Resort locations multiple times throughout the year. Not all of the great artists employed by the Walt Disney Company work in animation. For anyone who has ever been strolling through the various walkways around Disney Parks (most often in EPCOT during festival events and other occasions), perhaps you were enthralled by the wonderfully elaborate pavement artistry you found gracing the streetscape.

Well, would you believe it if we told you that in many instances, this is the handiwork of Disney custodians who also just happen to be artists on the side? While sometimes Disney does employ pavement artists, particularly for such tasks, more often than not these are the renderings of the creative custodial team of Cast Members wearing multiple hats. 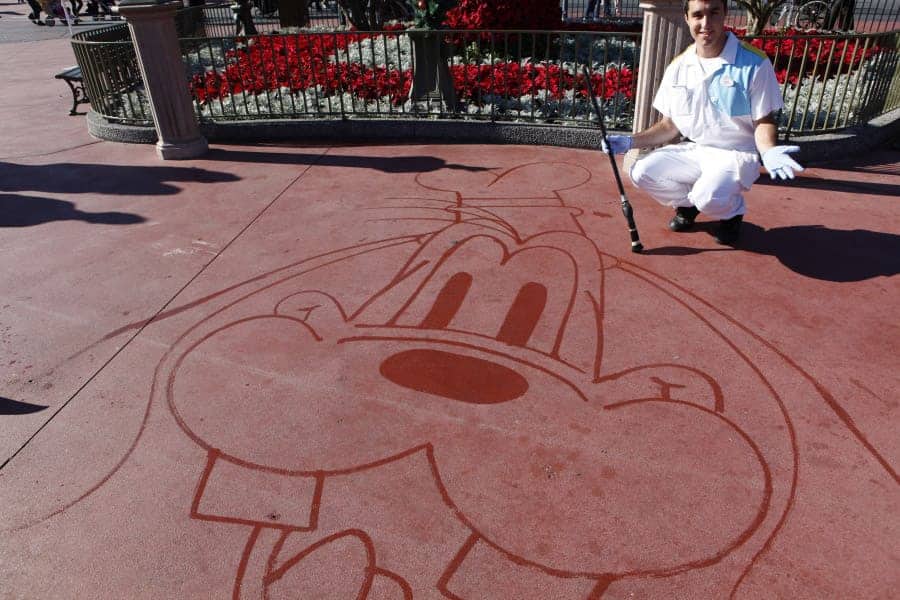 Have you ever been visiting a Disney Park right on the cusp of a particular holiday season, returned to your room for the evening, and then awoke the next day to find that a magical transformation had taken place by morning? Then you have the Disney Holiday Services Cast Members to thank for that remarkable feat.

Because it would be too distracting to try to accomplish the task of thematic redecorating in the midst of a crowded Park day, this talented team gets to work under the cover of night, transforming the scene into one of a specific holiday setting and motif. They are especially busy during their peak season, which ranges from the start of Mickey’s Not-So-Scary Halloween Party happenings to the conclusion of Mickey’s Very Merry Christmas Party events. But they play an active role throughout the year assisting with other seasonal occasions as well. 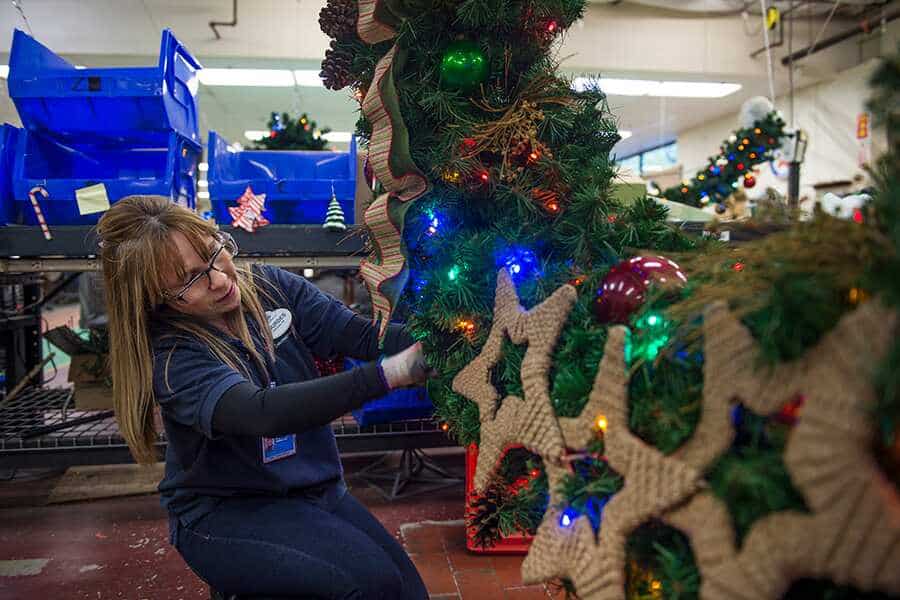 Do you just love chocolate and wish you could make it the crucial ingredient in your full-time career? That’s a joyful reality for Disney Chocolatiers, who are tasked with mixing Disney magic into well-concocted chocolate treats. The most well-known chocolatier positions are those working at The Ganachery at Disney Springs in the Walt Disney World Resort Area.

Skilled artisans in the trade of chocolate ingenuity, Cast Members serving as chocolatiers are even given courses in mastering the art of chocolate making upon being hired. Their tasks largely involve concocting chocolate treats on-the-spot, right in front of shoppers who come in to look in awe as the process unfolds. It just doesn’t get any sweeter than having a job like this. 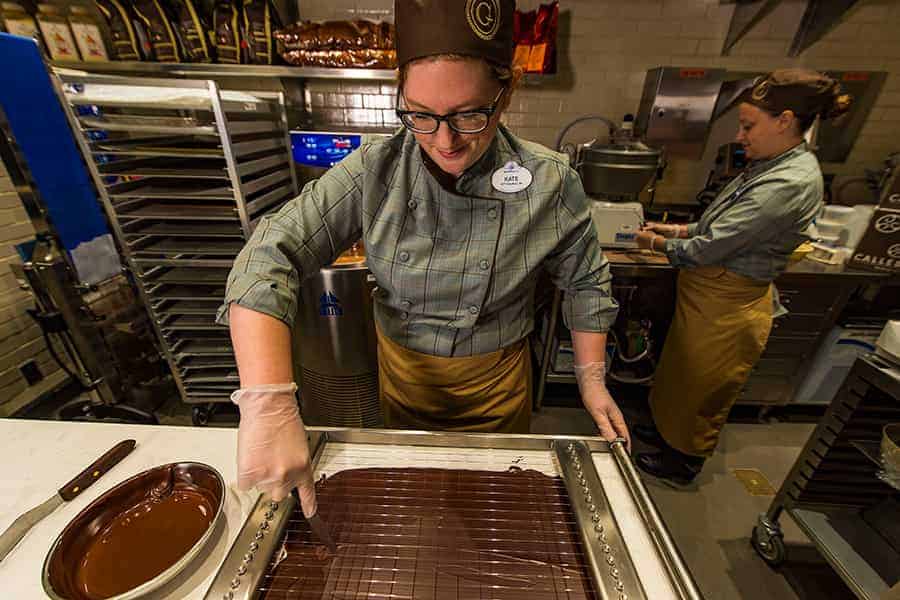 Having a green thumb may just be your opening for a career as an arborist or horticulturist working for the Walt Disney Company. Cast Members employed at Disney Parks the world over work diligently in the maintenance and upkeep of all the lush, pristine, and seemingly perfect greenery. From climbing trees to pruning bushes, treating plants and flowers to ensure optimal blooming health, and helping to replant or transfer flora, it’s a multifaceted job working on the arbor side of the Disney Company.

And for anyone who has ever visited the Land Pavilion at Walt Disney World’s EPCOT, you already know the vital role Disney’s onsite horticulturists fill. From aquaponics to raising resident greens to be added to your next meal, this is one Cast Member job that lets you grow the magic, quite literally. 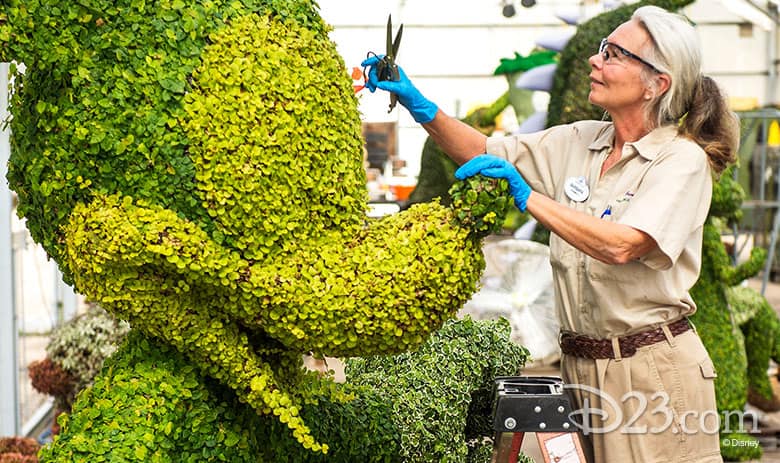 It’s interesting to note that many of the typical tasks you’d expect to find being carried out at a dude ranch are carried out at Walt Disney World accordingly. That’s because Disney’s own Fort Wilderness Resort is home to Tri-Circle-D Ranch. This is the permanent home to all of Disney’s performing horses.

From those that march along in parade processions to others that lead Guests in carriage rides or are otherwise used for trail rides, it goes without saying that these horses require all the usual care and upkeep that other horses at other ranches do. Therefore, some Cast Members are seasoned, skilled ranch hands. One thing that sets Disney Cast Members on the ranch apart, however, is their tendency to sometimes dress up in accordance with a specific theme when actively appearing alongside horses during a particular performance. 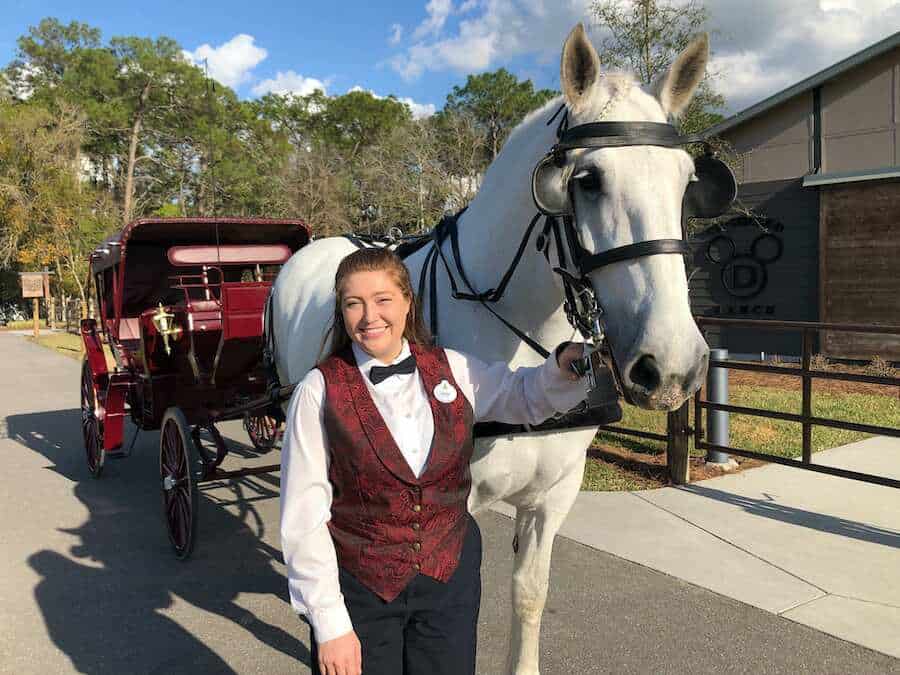 Related: All About the Horses of Walt Disney World Resort

Walt Disney World Resort, along with Disney-designated areas the world over, is known for playing host to resident animals of all sorts of varying species. From the horses mentioned above to the elaborate other creatures that call both Disney’s Animal Kingdom Park and Animal Kingdom Lodge home, there is a need for a team of professionally licensed veterinarians to always be onsite.

This means that Disney employs only the very best veterinarians as Cast Members. From performing regular wellness checks to active treatments and responses, they do it all. Additionally, Disney staffs marine biologists to help manage the menagerie of maritime friends swimming about in the Living Seas with Nemo Pavilion at EPCOT. 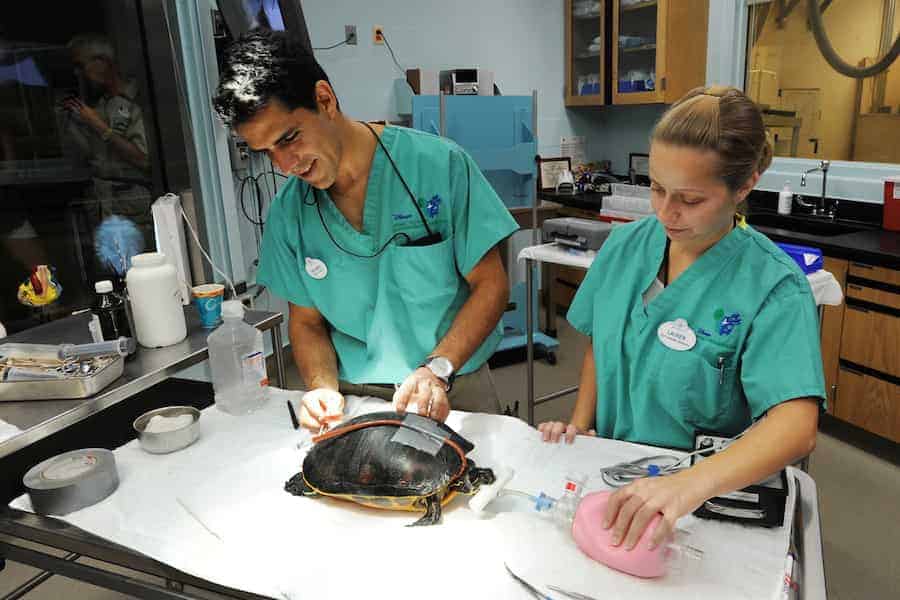 Have you ever wondered why Disney fireworks go off with a bang that other parks and resorts just can’t hold a candle to? It’s because they hire only the greatest to work on the Fireworks Design Cast Member Team. That’s right, Disney fireworks are specifically designed by the best and brightest minds in the industry. And they don’t hire just anyone who has a love for pyrotechnics.

To become a Cast Member tasked in the art of fireworks design comes with years of experience in the entertainment field in addition to a versatile, well-rounded knowledge and know-how regarding what designing and carrying out firework presentations entails. 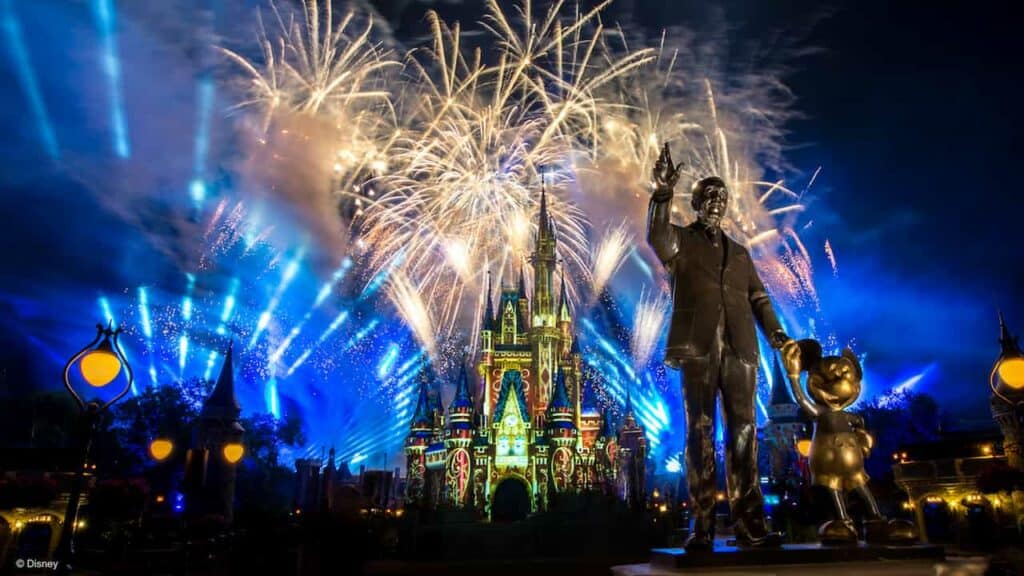 Have you ever noticed how smartly dressed the animatronics that are such an integral part of Disney attractions tend to be? It’s all the handiwork of those Cast Members who work as animatronics costumers. Designing clothes for animatronics is far more involved than simply dressing stationary mannequins. Because animatronics are oftentimes moving around during their performances, their clothing needs to be both flexible and form-fitting to sway along with their varied motions. This requires careful conceptualization, sewing, and initially fitting the characters accordingly. Stand back and take in the marvel that is your favorite attraction at Disney Parks. Have you ever considered all the intricate workings and all of the meticulous details that went into its overall establishment? It’s quite an accomplishment when you think about it. From the design and theming in careful coordination to the working plot, to figuring out the ways in which the specific technologies will be incorporated into the overall deliverance, Cast Members working as Attraction Designers are certainly kept busy seeing that everything goes just right! 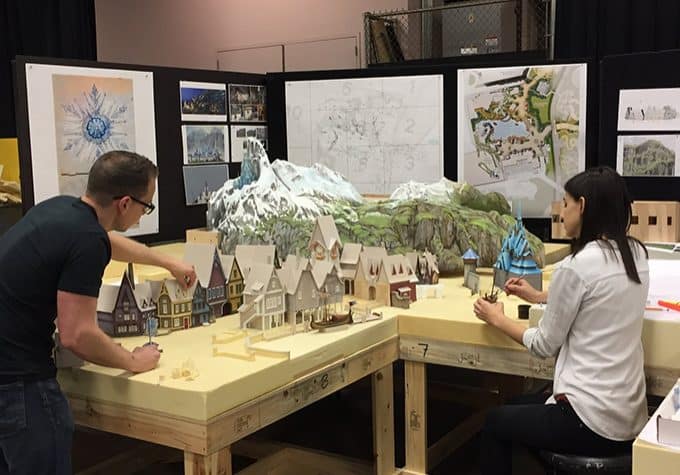 Disney Imagineers are ultimately engineers with wonderful imaginations. Walt Disney Imagineering is comprised of some of the most innovative minds in the field who know firsthand how to take well-cultivated dreams and breathe life into them, all while considering all the physics, aerodynamics, and technical aspects and angles involved. Anyone can visualize a great idea, but the Imagineers make it all come together, finding ways to go above and beyond in bringing forth a most optimal ride experience with all safety considerations well in place. There are a fair amount of water-based attractions in Disney Parks throughout the world. This means that the upkeep of such follies requires knowledgeable Cast Members well-versed in underwater machine workings who also happen to be scuba-certified. This is the team that plunges into the water late at night, once the Parks are closed for the evening, checking the tracks and all other ride components, cleaning off the residue, and making sure that all is in working order, fixing anything that needs fixing along the way. Now that you’ve seen so many different Cast Member job prospects, doesn’t it make you want to ready your resume and start applying for opportunities to join Disney yourself? And we’ve only scraped the surface, for there are many, many other options to consider within the range of the Walt Disney Company in addition to all these. So, whatever your versatile interests may be, your dream job may just be waiting for you at Disney.