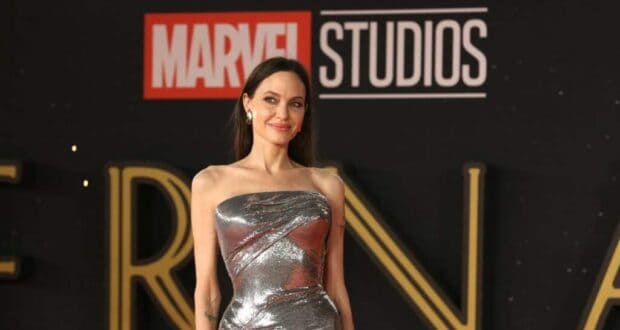 Although Angelina Jolie might be new to the Marvel Cinematic Universe with her role as the Celestial Thena in Eternals (2021), the actress and humanitarian is definitely not new to high fashion or red carpet choices. Angelina Jolie has been impressing her audiences and her peers in Hollywood for years with her devotion to humanitarian efforts, her beauty, and the legendary intimidation factor that she brings with her everywhere she goes.

It certainly takes a certain kind of inner prowess and confidence to be as striking and eye-catching as Angelina is, both in her films and offscreen, but the actress who co-starred in Maleficent (2014) with Elle Fanning also has a strong sense of style that keeps her from following unflattering fashion trends when it comes to her red carpet choices–and Vogue has noticed! Angelina Jolie has just been placed on Vogue’s list of the 12 Best-Dressed Women of 2021. 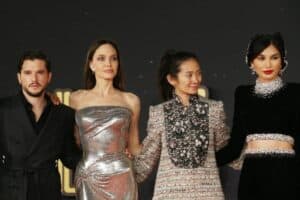 On the press tour for Marvel Studio’s Eternals, Angelina Jolie and her co-star Gemma Chan turned lots of heads with their sartorial choices (and Gemma was also put on Vogue’s Best-Dressed List). The character Thena seems like an instant match for Angelina Jolie, at least style-wise; Thena’s entire aesthetic involves metallics and Angelina herself tends to gravitate towards the more shiny Elie Saab creations and the liquid metal Atelier Versace dresses! 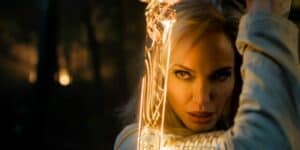 “No one wears Versace like Angelina Jolie, who commissioned Donatella to create her an otherworldly gown befitting the Rome premiere of Eternals,” said Vogue. “But it was not even this jaw-droppingly exquisite fashion moment that defined her blockbuster year promoting the superhero franchise. In fact, Angelina’s best look wasn’t even worn by the actor herself. She lent her daughter Zahara the shimmering Elie Saab couture dress she wore to the 2014 Oscars, which the teenager looked resplendent in some seven years on. As the year drew to a close, Jolie had reinvented herself as an archive-fluencer; an environmentally-conscious fashion plate with a penchant for vintage and the foresight to never throw clothing away.”

Reusing clothing for the red carpet is a big part of the shift towards sustainability in the fashion industry that Emma Watson and Jane Fonda have also been supporting. The Eco-Age Green Carpet Challenge has been a big initiative pushing celebrities towards environmentally-friendly couture and sustainable fashion, too!