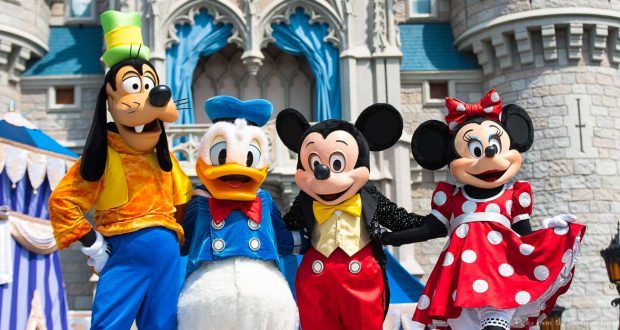 Disney World is teeming with all sorts of characters, but due to the ongoing COVID-19 pandemic, character greetings remain temporarily unavailable and there’s no word on when they will be reinstated. While this does mean that guests miss out on personal encounters with their favorite Disney characters, there are still many other ways for you to see them – you just have to know where to look.

But don’t worry – we don’t expect you to just hit the parks and find out for yourself, as that would take forever – and every second counts when it comes to your Disney trip! So we’ve compiled a list of some of the best non-greeting character experiences at Disney World for you. And they come in all shapes and sizes – attractions, stores, scavenger hunts, you name it!

Viewing an attraction as a way to interact with characters might seem like a cop-out, but there are some exceptions to the rule. And there’s no better example than Star Tours – The Adventures Continue. We aren’t talking about the characters you see during your space tour – we’re speaking strictly of the infamous droid-duo C-3PO and R2-D2, who you’ll meet while queuing at the Star Tours spaceport. The reason these guys deserve a call-out is largely because they’re technically real droids! In their audio-animatronic form, they appear just as they would in a Star Wars movie. And while you’re unable to speak with them, they’re a huge part of your experience on this galactic adventure.

Star Wars: Rise of the Resistance

Like Star Tours – The Adventures Continue, Star Wars: Rise of the Resistance features both audio-animatronic characters and those of the computer-generated kind. Throughout the experience, you’ll see the likes of Kylo Ren and General Hux, however, before your adventure really gets going, you’ll meet Rey in hologram-form – and it’s none other than Daisy Ridley herself! You’ll also see a real BB-8, a video message from Oscar Isaac’s Poe Dameron and an incredibly realistic audio-animatronic of Admiral Ackbar. With Character Greetings at Star Wars: Galaxy’s Edge temporarily unavailable, we’ll have to take what we can get where the faraway galaxy-themed attractions are concerned!

Searching for Disney characters can be fun, but mixing it up with a scavenger hunt is a great way to combine character experiences with your exploration of the four Disney Parks! From October 1, the 50th anniversary celebrations will invite you to take part in the Disney Fab 50 Character Collection – Disney characters in the form of exquisite golden sculptures. They’re dotted all over the parks, so be sure to download the My Disney Experience mobile app and use its GPS-enabled interactive map to help you find these treasures. And the sculptures aren’t limited to the likes of Mickey, Minnie, Donald, Daisy, Pluto and Goofy – there are all sorts of other characters, such as Lumiere and Cogsworth!

If you find yourself in Star Wars: Galaxy’s Edge, you will of course notice that Character Greetings are still unavailable due to the COVID-19 pandemic, but there are ways around this, just like the two attractions we’ve told you about. However, if you want to get up-close-and-personal with a Star Wars character, then be sure to check out Dok-Ondar’s Den of Antiquities, where you’ll not only find all sorts of Star Wars memorabilia and rare antiquities from the faraway galaxy, but also legendary antiques dealer Dok-Ondar himself. He’s of the audio-animatronic variety and is incredibly realistic. The Ithorian collector can be seen behind a fenced-off counter, and he looks frighteningly real!

There are many ways to get your character fix at Disney’s Hollywood Studios, and fortunately they aren’t restricted only to attractions. The relatively new ‘Motorcades’ offers you the chance to see some of your favorite Disney and Pixar characters! Watch as they travel down Hollywood Boulevard and beyond Echo Lake in their dazzling rides. You’ll see the likes of Mickey, Minnie and all the other classic Disney characters, and Pixar characters too, such as The Incredibles, Woody, Buzz Lightyear and Sulley! You won’t be able to get any autographs, but your memories will last a lot longer than some ink on paper! And if you’re a pro with your phone, you’ll be able to get a decent selfie too!

If you love the Motorcades at Disney’s Hollywood Studios, then you’ll absolutely love the Flotillas at Disney’s Animal Kingdom. Head over to Discovery Island and prepare for a Disney character extravaganza, as many familiar faces take to Discovery River aboard their very own individually-themed Flotillas. You’ll see Mickey and the usual suspects such as Donald and Goofy, as well as characters from The Lion King and Pocahontas – yes, they’re just around the river bend! The Flotillas are a great way to tick many characters off your list, and while we understand that seeing them isn’t quite the same as meeting them, these are moments that will make for some truly magical memories nevertheless.

There are many other character experiences throughout Disney World, such as Character Dining at Chef Mickey’s, sing-along stage shows like For the First Time in Forever – A Frozen Sing-Along Celebration and many more. You just have to do the homework before you go – but it’s also a matter of perspective. Some people won’t see character-based attractions as character experiences, while others will. Just remember one thing – Disney World might be short on the traditional greetings these days, but it’s still bursting at the seams with all your favorite friends and heroes!