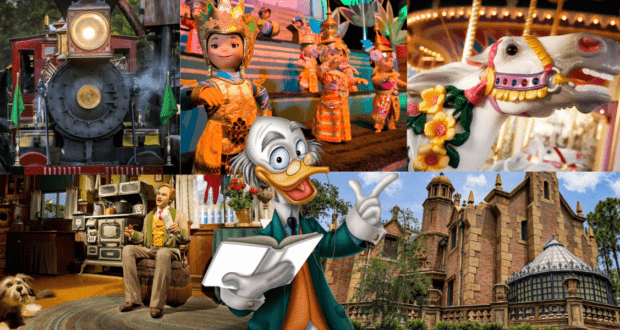 Did You Know That These Are the Oldest Attractions at Disney World?

With all the 50th Anniversary Celebrations that have been taking place within the past two years, everyone’s pretty much well aware by now that Walt Disney World Resort in Florida has been around for more than five decades already! At the time, the Magic Kingdom was the only Disney World park that had been established by the time opening day rolled around on October 1, 1971. The addition of EPCOT came later on October 1, 1982, followed by Hollywood Studios (formerly Disney-MGM Studios) on May 1, 1989. Disney’s Animal Kingdom is the youngest Disney Park on the scene, having opened on April 22, 1998 (Earth Day).

While it’s true that over the years we have all experienced the heartache of seeing a beloved Disney ride or attraction get the axe from time to time, it’s also undeniably amazing when you consider just how many originals were a part of each Park’s opening day and remain in full operation even now. Here’s a look at 10 of the oldest attractions at Disney World that are still enjoyed by Guests today.

After garnering success as a beloved Disneyland Park staple featuring more than 150 talking, singing, and dancing animatronic birds, it was pretty much a given that Disney World would be getting its own version. And so, it came about just in time for opening day, premiering under the name “Topical Serenade” at Magic Kingdom Park, right within Adventureland. Inevitably, modifications have come about over the years, like the renaming of the attraction to “The Enchanted Tiki Birds” back in 1993. Then the inclusion of Iago from Disney’s Aladdin and Zazu from The Lion King resulted in a slight retheming back in 1998, at which time the attraction was known as “The Enchanted Tiki Room (Under New Management)”. The Magic Kingdom attraction has been operating as “Walt Disney’s Enchanted Tiki Room” since 2011 when it reopened following a temporary closure due to a fire. 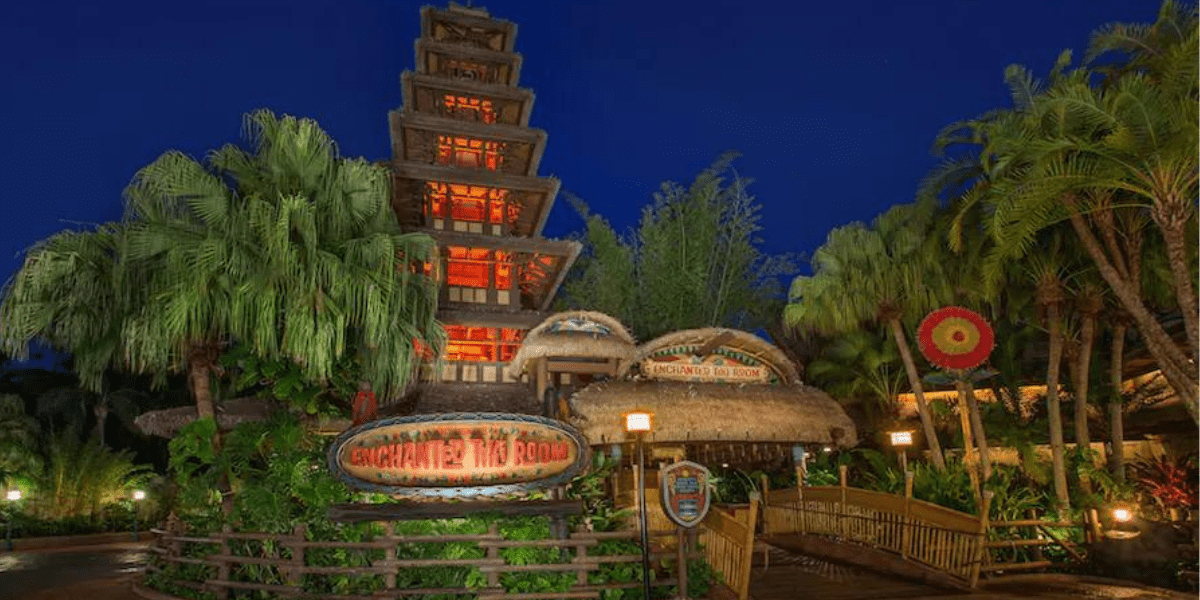 This Fantasyland mainstay, which is notoriously famous for those seemingly endless lines any time of the day, premiered just two days after Disney World’s grand opening. You’re probably wondering if the lines were long even then. Well, that was probably the case given the fact that it was essentially replicated after the Disneyland version that opened back in 1955. But even among all those Disney World installments that are largely modeled after Disneyland precursors, there are always distinguishing callouts to make each one an original. For instance, the Disneyland attraction originally banked on an experience to make the Guest feel like Peter Pan, therefore omitting the character’s presence from the attraction initially. This was remedied by 1983, though. However, such scenes featuring animatronic presentations of the title protagonist were always a part of the Disney World rendition, meaning there were many years when Disney World had something Disneyland was lacking. Essentially, Disney World’s Peter Pan remains as timeless as the character himself in popularity and Park presence. 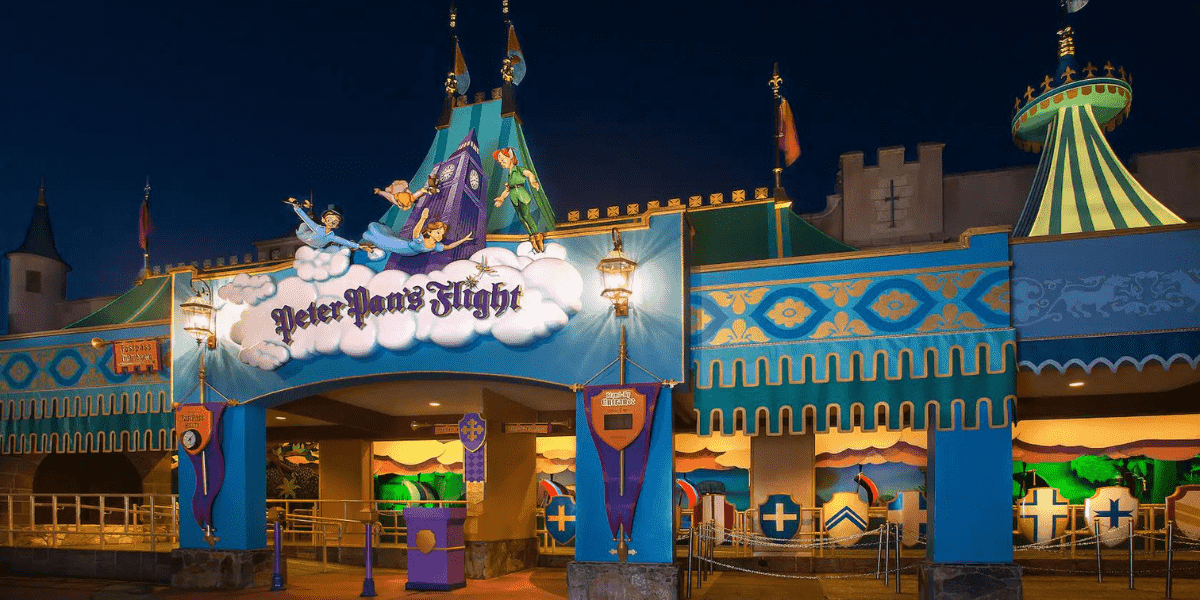 Related: The Peter Pan’s Flight Secret That No One Seems to Know

Here’s another Adventureland staple that’s been around since opening day. And like several others on this list, an existing version existed over at Disneyland long before Walt Disney World Resort ever came about. In fact, there are now versions at both Tokyo Disneyland as well as at Hong Kong Disneyland in addition to Walt Disney World Resort. What’s great about the Jungle Cruise rides is that each experience is entirely different, despite having the same fun components, which include animal animatronics and an entertaining riverboat adventure. And given the delight that each experience provides, it seems a likely conclusion that Jungle Cruise attractions won’t be going anywhere ever. 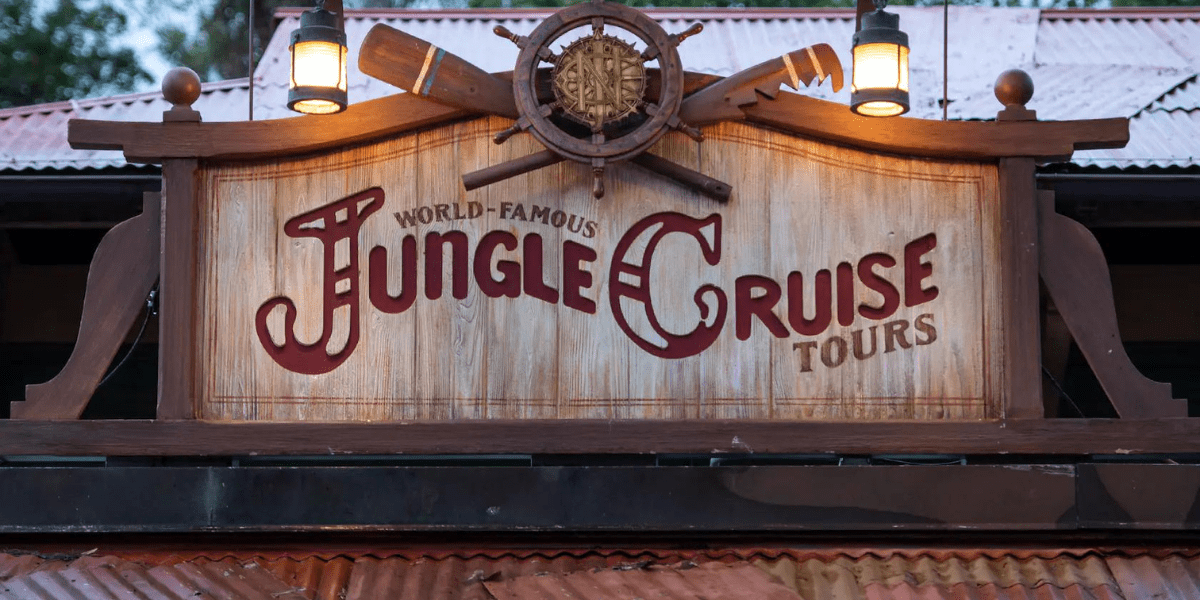 Another Magic Kingdom ride that’s been around since opening day is this creepy cult classic. Again, you have a Disneyland precursor that essentially provided the inspiration for it all. And like the aforementioned Jungle Cruise, there are even other Disney parks the world over that feature their own renditions, including Tokyo Disneyland, Disneyland Park Paris, and Hong Kong Disneyland. But the Walt Disney World ride was essentially the first one to break from the cookie-cutter design of the original, although many of the same inclusions do appear in both. All the same, Disney World’s version tends to be a little longer and slightly more elaborate in comparison to the original. It also exudes more of a colonial style, which is on par with its placement within Liberty Square—a land that Disneyland lacks in favor of its alternate New Orleans Square. 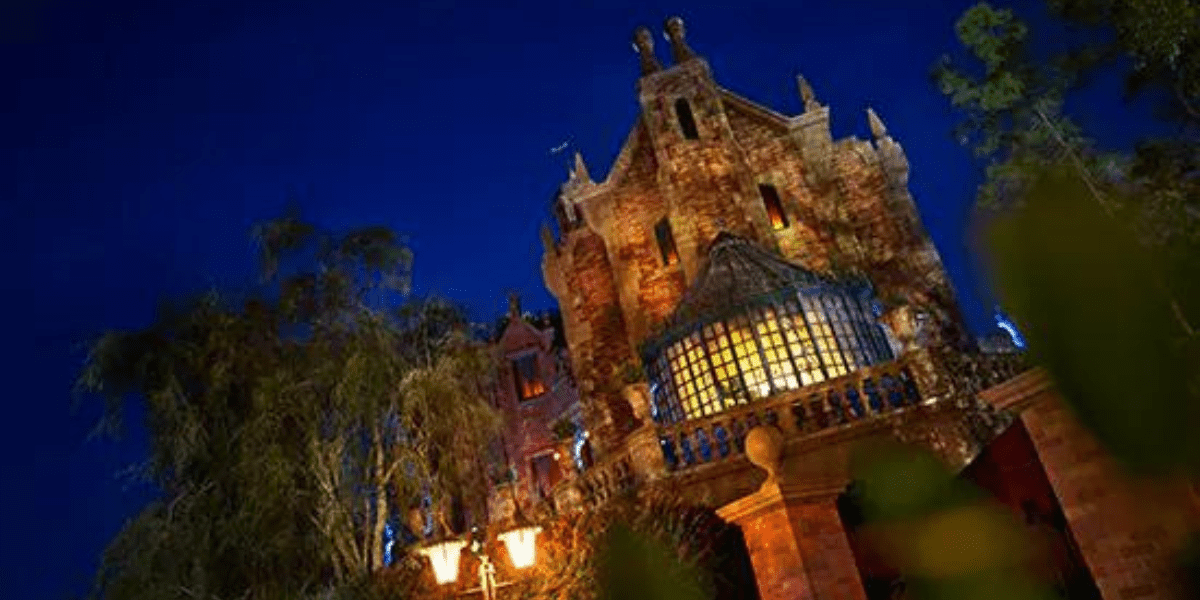 Because Walt Disney was such a fan of trains, it should come as no surprise that a railroad ride would be included as an original opening day attraction. Not only does it make for a fun little themed excursion, but it also serves as a viable way to get around the Park, with three different train station areas for embarking and departing accordingly. The route spans 1.5 miles total and even utilizes authentic working vintage steam engines. Four separate trains run on the track, respectfully named Walter E. Disney, Lilly Belle, Roy O. Disney, and Roger E. Broggie (named for the Imagineer who had a direct hand in bringing this attraction together). Just how many trains are called on to operate on a given day may vary.

While it’s already been said that this is among one of the oldest continuous operating attractions at Walt Disney World, some components make it even older than its 51+ year tenure. For instance, while it was still under construction, and the time came to establish the different train cars, the decision was made to restore existing vintage ones rather than build them all from scratch. The oldest trains were built between 1916 to 1928. 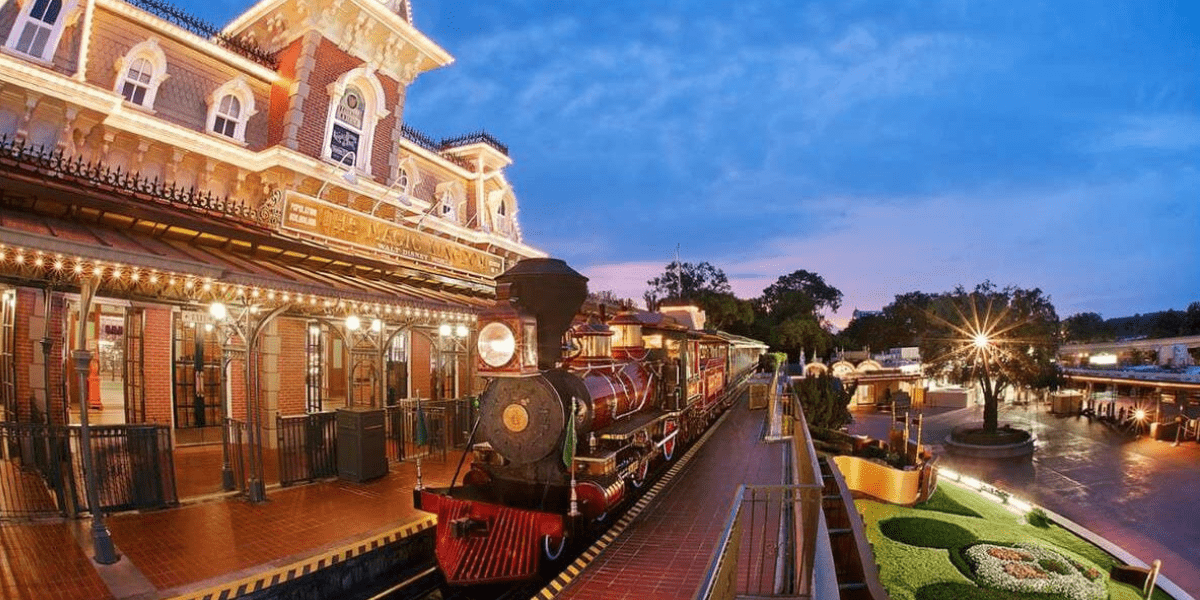 Although some folks may argue that the establishment of a second Dumbo the Flying Elephant in 2012 may detract from the antiquated status of the original, the records still show us that Dumbo was in fact around when Disney World first opened to the public. And before then, Disneyland had its first classic presentation of this aerial carousel-style circular ride themed after the beloved Walt Disney animated film Dumbo from 1941. While arguably a kiddie ride, it still remains one of those classic Disney rites of passage that every diehard Disney fan has to experience at least once. 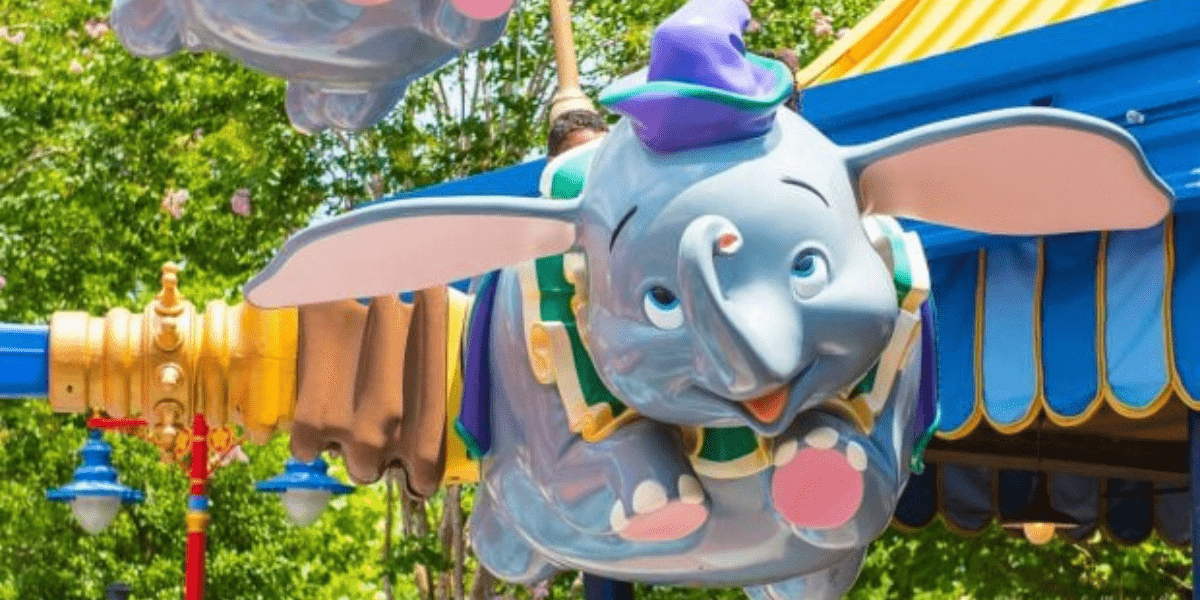 Here’s a familiar favorite that many longtime visitors to Disney World have known as a Frontierland staple since opening day. What fewer folks realize, however, is that this endearing bear-based animatronic classic was actually intended for a never-built ski resort Disney was planning to open—Mineral King Ski Resort. Also, unlike most of the other attractions on this list, Country Bear Jamboree got its official start at Disney World rather than at Disneyland. Disneyland did eventually end up creating its own version, although it no longer exists.  Country Bear Jamboree at Disney World, however, continues to prevail as a Park classic to this day. 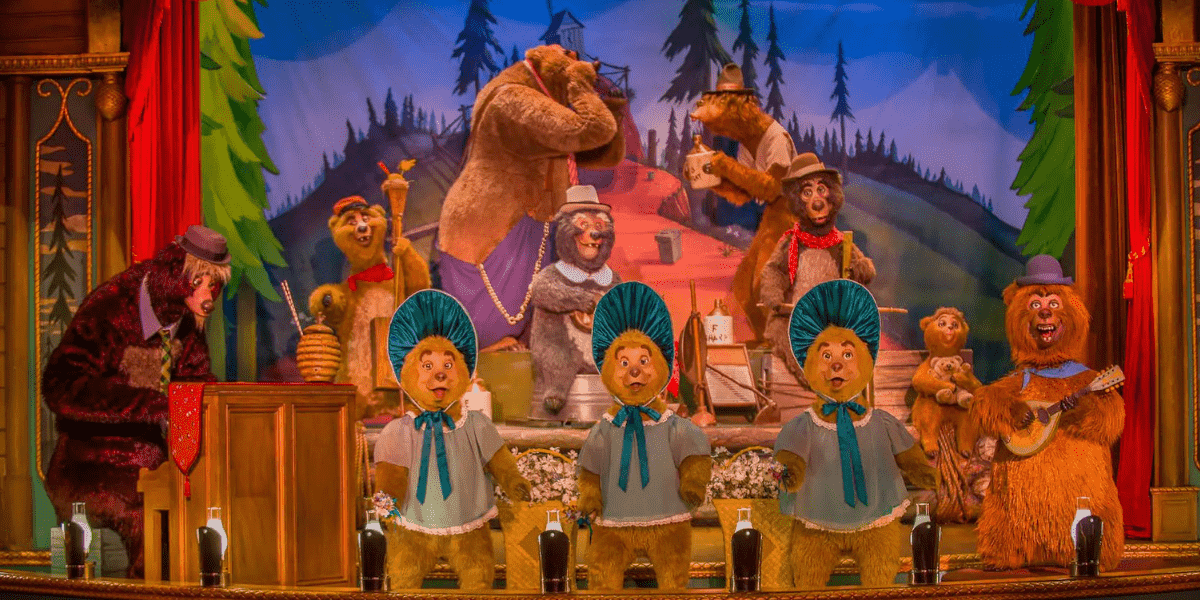 This is a featured favorite at so many Disney Parks the world over—a celebration of international unity and global peace featuring more than 300 singing childlike dolls. But the surprising tidbit here is that it did not get its start at Walt Disney World Resort or even Disneyland Resort for that matter. It was created by Walt Disney Enterprises specifically for the 1964 New York World’s Fair. It did not premier as a Disneyland attraction until 1966. Then, by October 1, 1971, a recreated version debuted on opening day at Disney World, featuring many of the same beloved dolls, scenes, and that iconic namesake theme song by the Sherman Brothers. 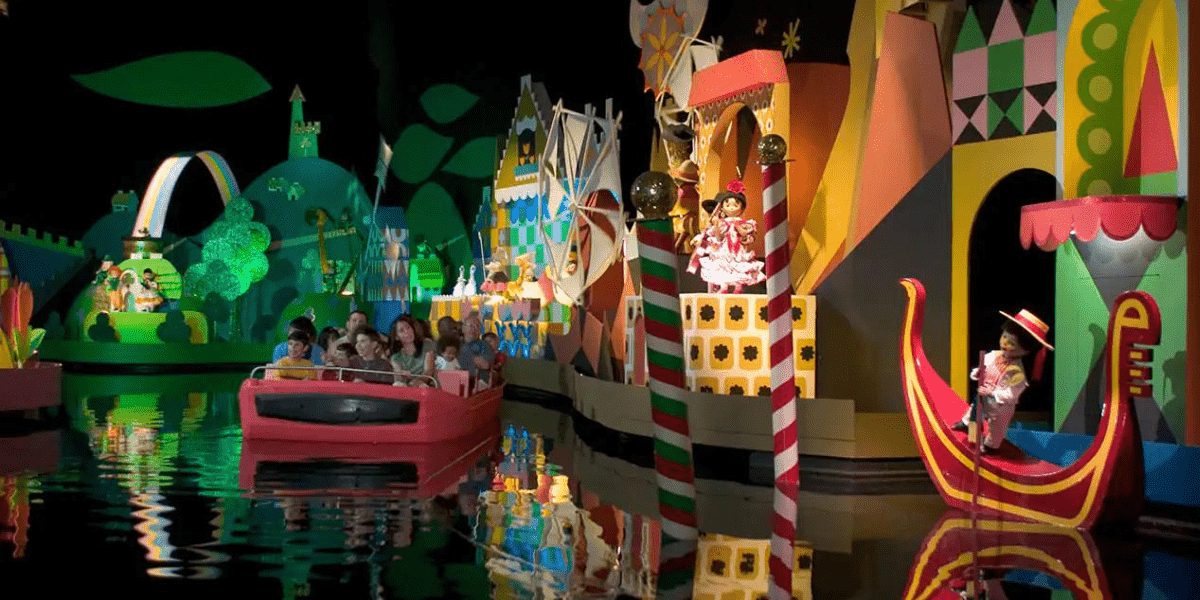 This is by no means a literal carousel but rather a dark-theater experience with revolving scenes that move the storyline further into the future with each presented segment. And it too was originally created in 1964 for the New York World’s Fair. It did, for a time, find a home at Disneyland, between 1967 and 1973. Then, in 1974 it was replaced by America Sings, at which time the Carousel of Progress was moved to Tomorrowland at Magic Kingdom Park where it’s been operating since 1975. While it was not an original opening day attraction in the Park, given the fact that it was actually built prior to the Park’s conception, its status as one of the oldest attractions onsite is well intact. 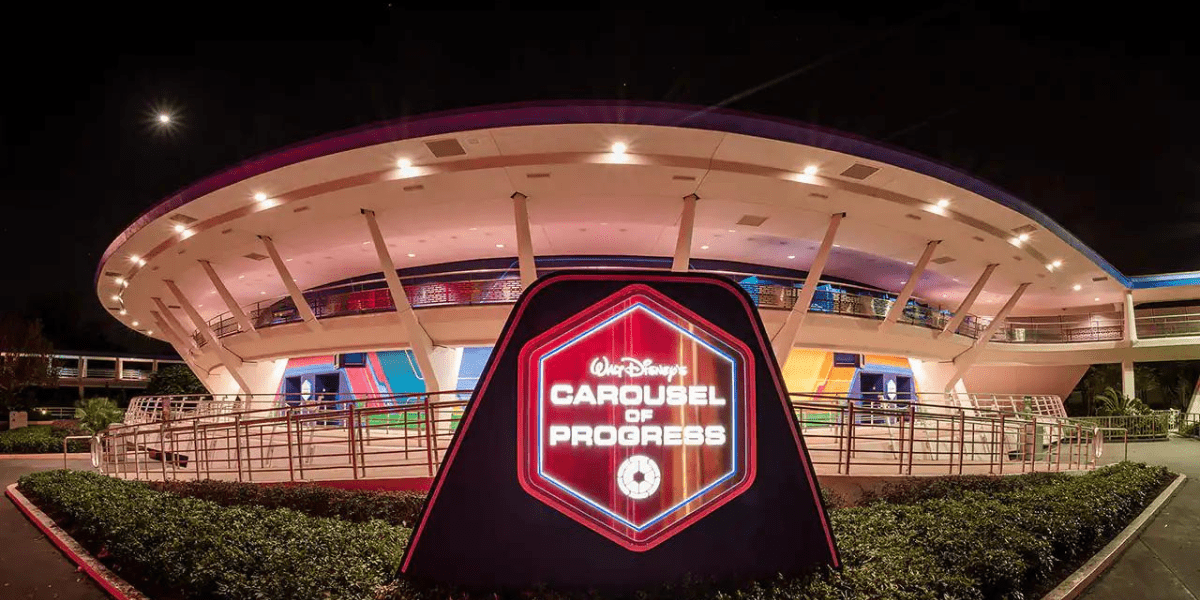 Here is a literal carousel in every sense of the word. It also happens to be, hands down, the oldest attraction to date in all of Walt Disney World Resort. Originally built in 1917 by the Philadelphia Toboggan Company, it was formerly known as “The Liberty Carousel” and found a home at Belle Isle Park in Detroit, Michigan before moving to Olympic Park in Irvington, New Jersey. Back in 1967 the Walt Disney Company purchased it. After massive refurbishments, it was transformed into what would go on to become Cinderella’s Golden Carousel at Magic Kingdom Park. It premiered on opening day at Magic Kingdom Park and remains a marvel to this day. It did undergo a minor retheming in 2010 that expanded upon the Cinderella happily-ever-after backstory. This also resulted in a renaming to its current Prince Charming Regal Carrousel. 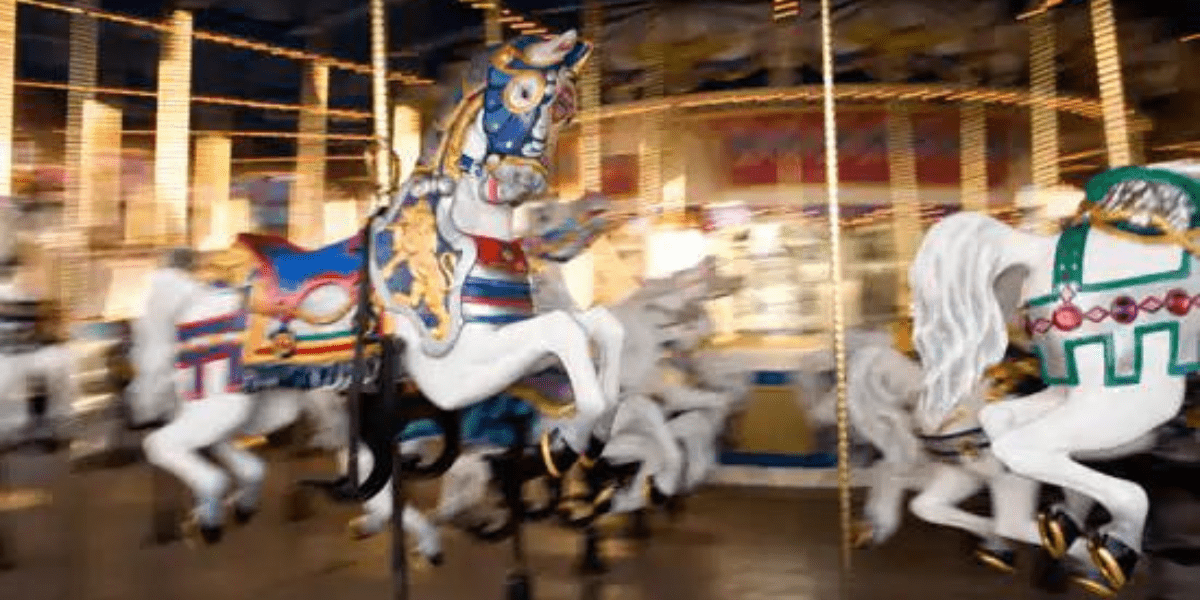 There are many other opening day attractions at Magic Kingdom Park as well as Disney World’s other theme parks that could have been included on this list as well. On a similar note, there are also many longtime classics we all tend to erroneously think were in fact around for various opening day celebrations but did not actually come about until well after the opening of a given Park. Just the same, we still endeavor each and every attraction as contested Disney World Park staples that have lived up to all those magical standards that are to be expected from Disney.