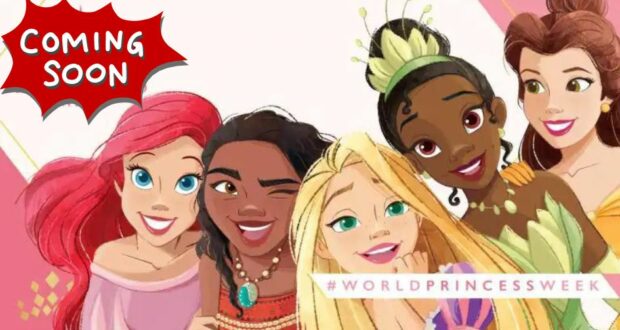 Disney princesses are an iconic staple when it comes to the Walt Disney Company. They are present in plenty of Disney films, Disney musicals, and Disney Parks. However, with the constant introduction of new Disney or Pixar (or Marvel) characters to Disney culture, Disney princesses can sometimes seem to be taken for granted. Now, Disney princesses’ big chance to be the focus is back for 2022: it’s World Princess Week!

World Princess Week is coming up next week to finish off August, and just like last year in 2021, the special weeklong celebration will include plenty of bonus Disney princess experiences. In addition, Disney princesses will take turns being honored on specific weekdays with particularly limited-edition Disney Park treats or Ultimate Princess Celebration events.

#WorldPrincessWeek returns next week! Don't miss the limited-time offerings, first looks and exciting content throughout the week as we celebrate these beloved heroines: https://t.co/xRmxKOZ5Ea pic.twitter.com/uL9iT45F2o

Last year, the Disney princesses who were honored with special Disney Park days in World Princess Week were Tiana, Cinderella, Belle, Mulan, Ariel, Moana, Elsa, and Anna. This year, Raya from the 2021 movie Raya and the Last Dragon is officially becoming a Disney princess as well, so it seems likely that the Disney heroine will be one of the 2022 honorees since she is about to be an official Disney princess! World Princess Week is part of Disney’s Ultimate Princess Celebration, which is (according to the Disney Parks Blog) “a global extravaganza across the Walt Disney Company that highlights the impact of Disney Princesses and the courage and kindness they inspire in fans all around the world.” Jane Fonda was featured as part of the Ultimate Princess Celebration. Credit: ELLE