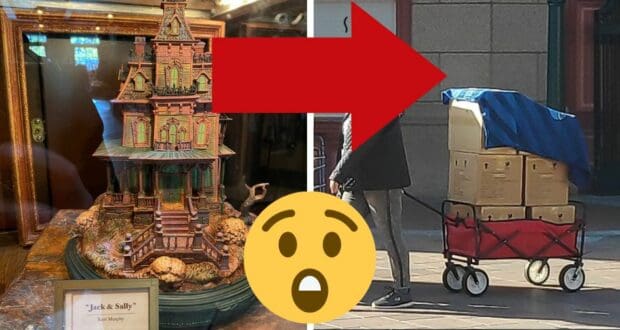 Resellers are at it again! Many Disney fans might feel like they have a lot of Disney-related enemies these days, such as increased prices, badly-behaved Disney Park Guests, and Disney CEO Bob Chapek or Disney Chairman Josh D’Amaro. However, Disney Fanatics also have a bone to pick with resellers — and apparently, this reseller problem extends beyond Walt Disney World Resort and Disneyland Resort!

In Disneyland Paris Resort in France, alleged Disney resellers have been spotted once again both in person and online. In this particular case, the exclusive Disney merchandise that was highly sought after (and was bought in bulk) was allegedly a replica of the Phantom Manor, which is the Disneyland Paris Resort version of the Haunted Mansion attraction.

The replicas are very much in-demand and apparently just came back in stock at Disneyland Paris Resort’s Thunder Mesa Mercantile Building store. Take a look at the Phantom Manor replica in the Tweet shown below!

Now take a look at these photos shared by Disney fans on Twitter, which seem to show some Disney customers buying such large quantities of merchandise (supposedly the Phantom Manor replicas) that they need trolleys to move their purchases. In the first Tweet shown below, the Twitter user wrote the following in French: “Fans of the Phantom Manor figurine are present on the park… but where will they put them all?…”.

The next Tweet (shown below) includes the following comment: “When I said they would come with trailers” and the hashtag “#scalpers”. Many people tend to hide the faces of the people that they photograph, but some Disney fans are demanding that resellers’ identities be revealed and that Disney penalize them with lifetime bans from Disney Parks (particularly after resellers struck at the Disney World EPCOT 40th anniversary recently).

Disney does try to prevent customers from stocking up on mass quantities of limited-edition merchandise, souvenirs, and apparel — but in order to circumvent the limitations, Guests can easily shop in different stores or ask family members to purchase the rest of the merchandise and apparel for them.

Have you seen resellers hogging all of the limited-edition merchandise in stores and selling it at high markups online later? Did you know that this problem extends beyond Walt Disney World Resort and Disneyland Resort?