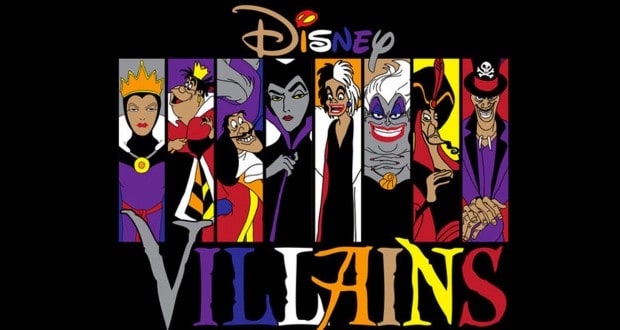 The Spooktacular Seven: A Selection of Disney’s Most Devious Villains

There are many Disney Villains to choose from, whether they’re animated or live-action. And now that Disney owns a huge number of IPs, it’s interesting to see what other crooked characters are in the mix.

Naturally, Halloween has got us thinking which Disney Villains are the most devious, and not only that, but we’ve also been wondering whether we could come up with our own ‘team’ of villains! Why is it always superheroes?

So has your favorite Disney Villain made it onto our list? Let’s find out who they are, and which dark corners of the Disneyverse they come from! Move over, Avengers – Spooktacular Seven, assemble!

You didn’t think this would be an ordinary Disney Villains list, did you? Don’t worry – we will get to some classic Disney characters, but we think it’s important to involve those who might be considered ‘non-Disney’ too. After all, Disney has already owned The Simpsons since 2017, which is only five years longer than Star Wars.

Charles Montgomery Burns is an iconic character and a recurring antagonist in The Simpsons. The greedy billionaire is maniacal, devious and cruel to pretty much everyone in Springfield! In many ways, he even has his own lair – the Springfield Nuclear Power Plant. And he has his own sidekick too, in the form of his very loyal aide Smithers.

While the finger-twiddling character is yet to be fully associated with Disney, you can still stream all episodes of The Simpsons on Disney+. We’re yet to see him appear in Disney Parks, though, as Springfield and its residents are still part of Universal Studios. But who knows – perhaps Disney will take a devious page out of Burns’ book and steal it all!

It wasn’t an easy choice to include Maleficent on our list, because the character has been portrayed as more of an anti-hero in recent years, with Angelina Jolie filling the boots – and those black leather-clad horns – in Maleficent (2014) and its sequel Maleficent: Mistress of Evil (2019).

However, there’s no ignoring the fact that she’s among the most iconic Disney Villains, and in her purest form is as wicked as they come. The dark fairy (known also as the ‘Mistress of Evil’) first appeared on screen in 1959’s Sleeping Beauty, and through her magic is responsible for Princess Aurora falling into that lifelong slumber.

Angelina Jolie’s performance in the two live-action films is stunning, and now both the actress and the character have become synonymous with one another. Nevertheless, whether she’s real, animated or in the pages of a book, she has been invited to form part of our Spooktacular Seven, and also makes for great Halloween fancy dress!

Scar has all the makings of a villain – greasy black mane, sinister smile, sly green eyes, theatrical personality and an incredibly jealous streak (he’s also voiced by the excellent Jeremy Irons). Even before we first see him meet up with the hyenas in The Lion King, it was pretty obvious that this mangy lion was up to no good.

It’s fair to say he might just be one of the most devious Disney Villains of all, as he manipulates young Simba and convinces him that he’s the one responsible for Mufasa falling into the wildebeest stampede. And if that isn’t enough, the bitter lion then proceeds to claim Pride Rock as his own and plunge it into darkness for several years.

Sadly, with very little in the way of The Lion King at Disney Parks when it comes to characters, finding Scar isn’t easy – although you can see a statue of him at Disney’s Art of Animation Resort. But don’t complain too much – he can’t be trusted one bit. Why? Well, he just can’t wait to be king, that’s why!

Related: The Family Guide to Halloween Content on Disney+

If you aren’t familiar with the antagonist from Disney’s 101 Dalmatians or the 2021 film Cruella, then just look at her name, as there are a couple of major giveaways about what kind of person she is. Born on the pages of the 1956 novel The Hundred and One Dalmatians, Cruella went on to become not only an iconic villain, but a fashion icon too!

The English heiress and fashion designer has been brought to life in live-action twice, by Glenn Close in the 1996’s 101 Dalmatians and its 2000 sequel, and this year by Emma Stone in the Cruella movie, who really injects the character with some of those Maleficent-like anti-hero qualities. But don’t be fooled – Cruella is exceptionally devious villain material.

But why is Cruella so, well, cruel? Well, when we said the clue is in her name, that only really describes her qualities. The real clue is in the title 101 Dalmatians, and let’s just say she isn’t a fan of those precious pooches. Or perhaps she’s the biggest fan of all. – it depends how you look at it!

According to Sebastian the crab, down where it’s wetter, it’s better – which is true, unless you happen to encounter the terrifying sea witch Ursula! This Disney Villain ranks among the more terrifying, as she frightened an entire generation of children when The Little Mermaid was released way back in 1989.

In the film, Ursula offers Ariel the chance to become human so that the young mermaid can marry Prince Eric, but if there’s one kind of character you shouldn’t trust in a Disney movie, it’s a witch. In return, Ursula steals Ariel’s voice, and also makes plans to become the ruler of the oceans, which involves dethroning Ariel’s father King Triton.

Ursula’s design is inspired by an octopus, hence her several tentacles (although she actually has six and not eight!), and her minions are two equally-slithery electric eels. For the first time ever, the iconic Disney Villain will be brought to life in live-action by Melissa McCarthy in The Little Mermaid live-action reboot, which is set for release in 2023.

Strangely, Emperor Palpatine has a couple of things in common with Mr. Burns. Not only are the two strikingly similar in appearance (just look at the image of Palpatine from Star Wars: The Clone Wars below!), but they’re also non-Disney Disney Villains. But be that as it may, these days it doesn’t get any more Disney than Star Wars.

Emperor ‘Sheev’ Palpatine (or ‘Darth Sidious’) appears in a lot of Star Wars movies and TV shows, such as the prequel trilogy, the original trilogy, the sequel trilogy, The Clone Wars and The Bad Batch. Before he became Emperor, though, he was Chancellor for the Republic, and is the one responsible for having orchestrated the Clone Wars in the first place.

The Sith Lord has also had a number of apprentices in his time, with Darth Maul and Darth Vader being among them. He is eventually overthrown by Vader in Return of the Jedi, and while his comeback in The Rise of Skywalker is short-lived, we’re sure he still lives on. After all, the Force is a pathway to many abilities some consider to be unnatural…

How can anyone have a Disney Villains list without including this truly terrible character from Toy Story? Okay, so he’s hardly as wicked as Emperor Palpatine or Ursula, but to Woody and Buzz he might as well be! And while he’s not entirely ‘devious’, he still steals toys from his sister and does all sorts of terrible things to them.

Sid appears in the first movie as the main antagonist (although he can also be seen in Toy Story 3 working as a garbage truck driver sporting his signature skull-logo t-shirt). He might be Andy’s neighbor, but the two definitely aren’t friends, as Sid spends almost all of his time destroying toys – usually blowing them to infinity and beyond!

Many fans have argued that he’s just an ordinary boy having fun with toys, which doesn’t necessarily make him bad – after all, he doesn’t know they’re alive (at least not until the third act) – but it’s plain to see that Sid is also cruel to his younger sister. So it’s fair to say that you do not have a friend in Sid!

There are of course many more Disney Villains, but these hand-picked individuals are definitely some of the most devious out there. And while we’d love to see them all team up, they’d probably all just turn on one another anyway – which is part of the reason why we love them so much!

You can also have lots of fun this Halloween dressing up as some of them (though we fully understand that the likes of Ursula and Scar aren’t so easy to achieve!), although it’s fair to say that Cruella will likely be a fancy dress-favorite following the hit movie on Disney+.