Even though there has been a lot of upheaval in the world of Disney recently, current Disney CEO Bob Iger shared an optimistic message with D23 members.

The news of former Disney CEO Bob Chapek being ousted from his position and his predecessor Bob Iger coming back in to take up the mantle once again swept the Disney community and broke the internet last month when it was announced. In just a week, the Disney leadership team has seen reorganization, and Iger’s return even resulted in Disney’s stock seeing a rise.

But among all the reorganization, Bob Iger has been meeting with Disney employees, Disney Cast Members and even revisiting the Disney Parks to get a sense of what’s happening in the Mouse House world. There have been many complaints recently about the experience at the Parks, whether that’s rude Cast Members or rude Guests, or even complaints about the multiple ride breakdowns. Avatar: The Way of Water has not made the numbers expected (resulting in the Disney stock dropping). With this context, however, Iger has sent out a message of hope for the future to all D23 members and Disney fans. 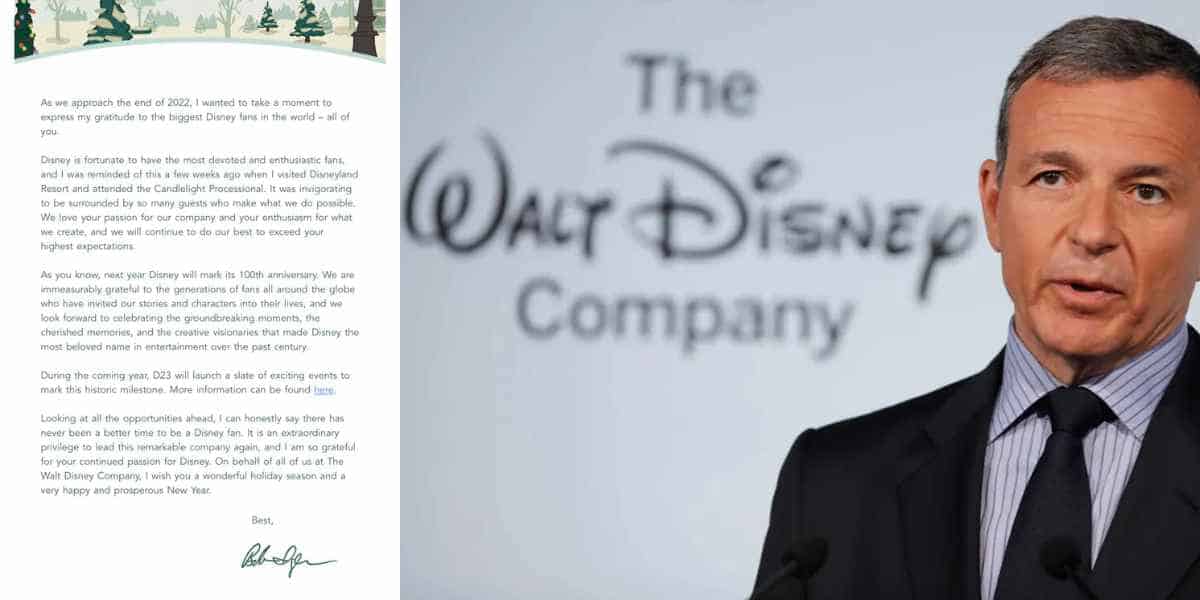 In an email (pictured above), Iger expressed,

As we approach the end of 2022, I wanted to take a moment to express my gratitude to the biggest Disney fans in the world – all of you.

Disney is fortunate to have the most devoted and enthusiastic fans, and I was reminded of this a few weeks ago when I visited Disneyland Resort and attended the Candlelight Processional. It was invigorating to be surrounded by so many guests who make what we do possible. We love your passion for our company and your enthusiasm for what we create, and we will continue to do our best to exceed your highest expectations.

As you know, next year Disney will mark its 100th anniversary. We are immeasurably grateful to the generations of fans all around the globe who have invited our stories and characters into their lives, and we look forward to celebrating the groundbreaking moments, the cherished memories, and the creative visionaries that made Disney the most beloved name in entertainment over the past century.

During the coming year, D23 will launch a slate of exciting events to mark this historic milestone.

Looking at all the opportunities ahead, I can honestly say there has never been a better time to be a Disney fan. It is an extraordinary privilege to lead this remarkable company again, and I am so grateful for your continued passion for Disney. On behalf of all of us at The Walt Disney Company, I wish you a wonderful holiday season and a very happy and prosperous New Year.

While it’s unclear what the future holds for the Walt Disney Company, fans are certainly hopeful that having Iger at the helm will bring back the magic many have expressed has been lost during Chapek’s era.