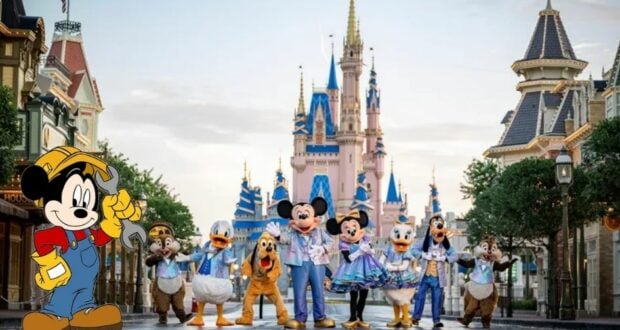 It’s an exciting time to visit Walt Disney World Resort! Disney is at the height of its 50th Anniversary celebration and the warmer weather is calling Disney fans to the Sunshine State.

Not only is May filled with celebrations such as Mother’s Day and Memorial Day, but it’s also an important month for Walt Disney World as EPCOT introduces Guests to the brand new roller coaster, Guardians of the Galaxy: Cosmic Rewind. Also at EPCOT, the Disney Park has opened its new restaurant and Starbucks called Connections Café & Eatery.

And FINALLY, when visiting Disney’s Animal Kingdom, we’re happy to see Expedition Everest – Legend of the Forbidden Mountain is once again up and running after its lengthy refurbishment.

There are however a few refurbishments on Walt Disney World property that those taking a Disney vacation for the month of May.

Ready for some Water Park fun? Take note that while Disney’s Typhoon Lagoon Water Park is currently open, Disney’s Blizzard Beach is closed for refurbishment. The Park closed on January 1, 2022, and Disney has yet to reveal refurbishment plans and an opening date. If you’re looking for an extra special way to enjoy Typhoon Lagoon, however, check out its H2O Glow Nights which begin in May.

Yes, sorry, the Walt Disney World Railroad at Magic Kingdom Park is still closed! The attraction has been closed since December 3, 2018, to make way for the construction work of the highly-anticipated roller coaster in Tomorrowland, TRON Lightchycle Run. We have seen some progress on the train’s tunnel through the new attraction, so we’re keeping our fingers crossed Disney is able to get the train back on the tracks soon enough!

Disney Vacation Club has announced the DVC Member Lounge at the top of Bay Lake Tower at Disney’s Contemporary Resort is currently closed as it is being reimagined. Disney has not yet announced when Top of the World Lounge will open or what the reimagining details entail.

The extremely popular Deluxe Resort Hotel, Disney’s Grand Floridian Resort & Spa is undergoing refurbishment as it adds new Disney Vacation Club Villas to a portion of the Resort Hotel. The construction began on March 1, 2022, with Disney announcing the new DVC Villas should be available by Summer 2022.

Take note that if staying at Disney’s Grand Floridian Resort, you may hear construction during the daytime hours. Disney is also planning to reimagine its current Narcoossee’s Restaurant beginning June 18, 2022.

Plus, soon enough we’ll be adding Disney’s Polynesian Village Resort to this list as it is preparing to undergo construction on its new Disney Vacation Club Tower which will take the place of the former Spirit of Aloha Dinner Show.

So, what’s next? May will be a busy month for EPCOT as mentioned above with a new coaster and new restaurant. Amidst the EPCOT transformation, we’re also seeing progress on the “Journey of Water Inspired by Moana” experience but Disney has yet to release further details on when the attraction will be ready.

A recent update from Disney notes the new Finding Nemo show, Finding Nemo: The Big Blue… and Beyond will be ready to wow Guests when it opens “Summer 2022” at Disney’s Animal Kingdom Theme Park.

We’re also extremely eager to experience the return of the beloved Fantasmic! at Disney’s Hollywood Studios. The nighttime spectacular has been greatly missed. Disney has promised “2022” for Disney fans to once again watch Sorcerer Mickey battle against the Disney Villains. Besides “2022” we’re still hearing crickets on an opening time frame from Disney.

May is surely going to be an exciting month at Walt Disney World! Keep an eye on the My Disney Experience app as refurbishments have been known to begin without notice, end sooner than expected, and shift according to Disney’s plan. In the meantime, we’ll continue to keep you posted on the latest news as we cruise through May 2022!