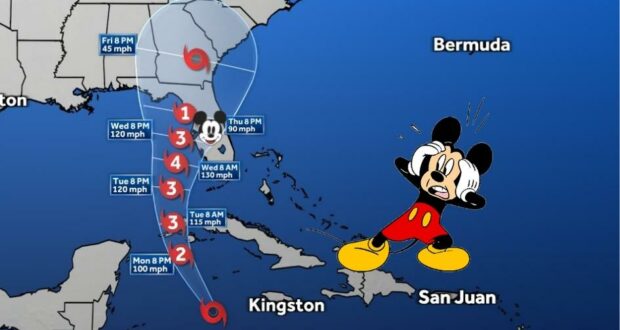 The latest consensus appears to put an end to the hopes that Ian was going to continue its push to the west and puts Walt Disney World, Universal Orlando Resort, and the rest of Central Florida back in a more central position within the “Cone of Uncertainty.”

11pm advisory for #Ian is in; Here's a look. More on this on WESH 2 News at 11! pic.twitter.com/iuTsOStOwu

“At 1100 PM EDT (0300 UTC), the center of Tropical Storm Ian was located near latitude 17.3 North, longitude 81.4 West. Ian is moving toward the northwest near 13 mph (20 km/h). A turn toward the north-northwest is expected on Monday followed by a northward motion on Tuesday with a slightly slower forward speed… Maximum sustained winds have increased to near 65 mph (100 km/h) with higher gusts. Additional strengthening is forecast tonight, followed by more rapid strengthening on Monday and Tuesday. Ian is forecast to become a hurricane by early Monday and a major hurricane on Tuesday.”

There is a very real threat that a major hurricane could hit the Tampa Bay area–which is just a 90-minute car ride away from the Theme Park Capital–by Wednesday night. Tropical Storm force winds should be expected to arrive in Central Florida by Tuesday night. Tropical Storm watches are now in effect for the southwest coast of Florida. The State of Emergency remains in effect. 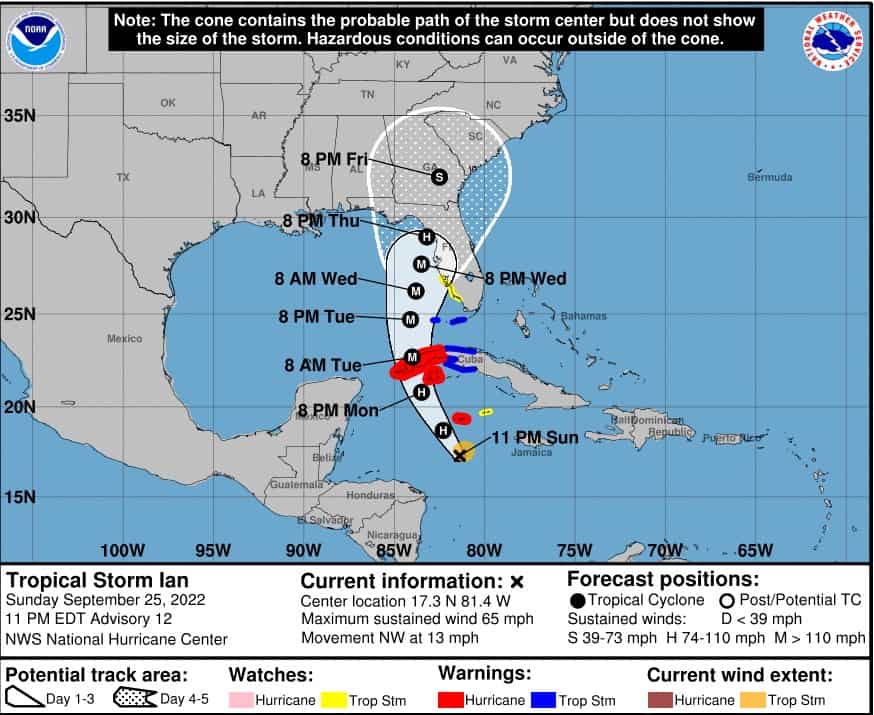 There is still no official word from Walt Disney World Resort or Disney Cruise Line regarding any changes in operation due to this storm. All readers currently at Walt Disney World and cannot find a flight out of the Sunshine State should rest easy. You are in the safest place you can be during a hurricane. Disney World has an established and tested hurricane policy in place to ensure all of its Guests are kept safe, fed, hydrated, warm, and comfortable. They have also been known to provide extra doses of magic to keep morale high such as extra special meet ‘n greets in hotel lobbies. If you were scheduled to fly down and begin your Walt Disney World vacation this week, we advise that you check with the Walt Disney Travel Company or your authorized Disney Vacation travel planner regarding your cancelation and rescheduling options.

The same advice goes for anyone scheduled to sail on a Disney Cruise Line ship out of Port Canaveral or Miami, as a Tropical Storm Warning is now in effect for parts of Miami-Dade County.

There is still time to prepare for #Ian tomorrow and possibly the first half of Tuesday, but conditions could deteriorate as early as Tuesday evening. Weather conditions could then continue to worsen by Wednesday and Thursday as Ian approaches the #Florida peninsula. pic.twitter.com/Ol72n8J1yC

All readers who will be staying in Central Florida for the entire week should be prepared for lots of wind and lots of rain. WESH2 is projecting the area to get 10-15 inches of rain over the next seven days, and Tropical Storm conditions could last from Tuesday night through Thursday. The risk of flooding is going to be high, and there will also be a risk of tornados developing in the area. But things are expected to calm down by the weekend.

We at Disney Fanatic will be back with a morning report containing the NHC’s 8:00 am advisory as well as the weekly weather forecast for Central Florida.