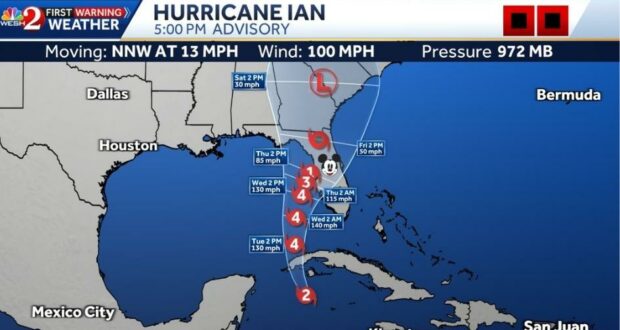 The National Hurricane Center (NHC) has released its 5:00 pm full advisory on the progress of Hurricane Ian. Sustained winds are nearing 100 mph, it is officially a Category 2 hurricane, and landfall appears closer to Walt Disney World Resort, Universal Orlando Resort, and the rest of Central Florida.

“At 500 PM EDT (2100 UTC), the center of Hurricane Ian was located near latitude 20.3 North, longitude 83.2 West. Ian is moving toward the north-northwest near 13 mph (20 km/h). A turn toward the north with a slightly slower forward speed is expected on Tuesday. A turn toward the north-northeast with a further reduction in forward speed is forecast on Wednesday… Maximum sustained winds have increased to near 100 mph (155 km/h) with higher gusts. Rapid strengthening is expected during the next day or so, and Ian is forecast to become a major hurricane tonight or early Tuesday”

Hurricane Warnings are now in effect for Florida’s central west coast, while a tropical storm watch remains in effect for Walt Disney World Resort and the rest of Orange and Osceola Counties. Hurricane Ian is still expected to grow into a Category 4, and remain a major hurricane system through Thursday morning before reducing to a Category 1 by the time it makes landfall. 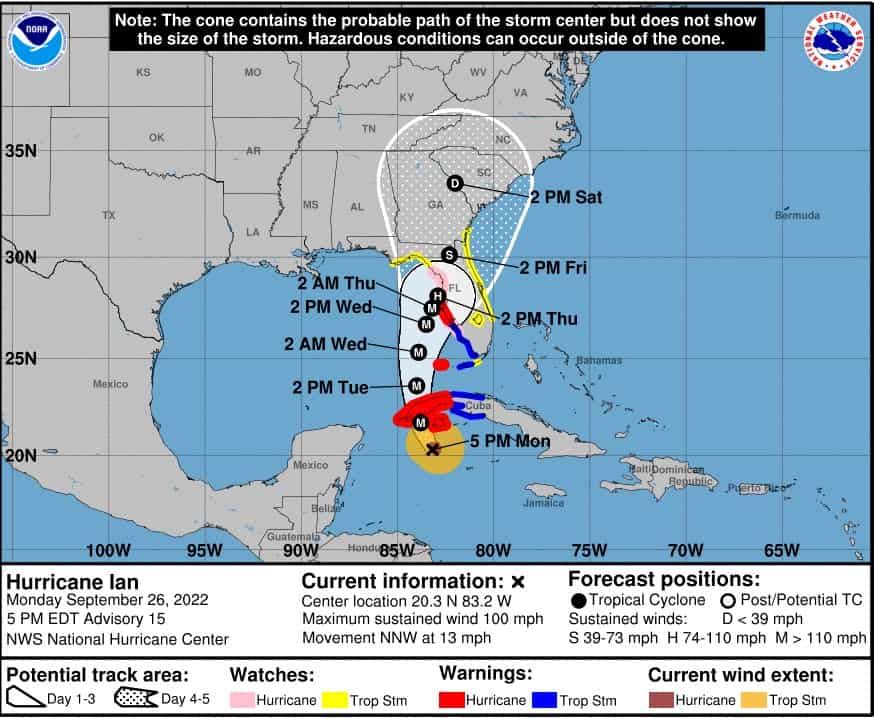 Confidence builds in the fact that this system will bring a lot of rain to Central Florida, and it appears that the forecast is predicting up to a foot of rain to fall by the end of this week. The worst of the storm is still expected to arrive in Central Florida by Tuesday night and last through Wednesday and Thursday.

At 5 pm Mon Hurricane Ian was located 155 mi SE of the western tip of Cuba with max sustained winds of 100 mph and a central pressure of 972 mb/28.71". Ian was moving to the NNW at 13 mph. A turn toward the N and then NNE and a decrease in forward speed is expected Tue & Wed. pic.twitter.com/I0fja7yOEH

The Walt Disney World Resort maintains plans to remain open throughout the week but will continue to watch the weather, prepared to make a game-time decision. Earlier today, we also reported that Disney World Resort Hotel availability had been cut off. There is still no official word from Disney Cruise Line regarding any operational changes.

Orlando International Airport also issued an advisory today, reminding its travelers that the airlines are the ones who cancel the flights at this point and to stay up to date with their specific itineraries.

If you are in a Walt Disney World Resort Hotel, you are in one of the safest places to be during a hurricane. If you are staying off property, we advise you to finalize a plan quickly and prepare for Tropical Storm conditions.

We at Disney Fanatic will continue to update our readers on Hurricane Ian as it appears to affect Central Florida and the Theme Park Capital as more developments come to light.