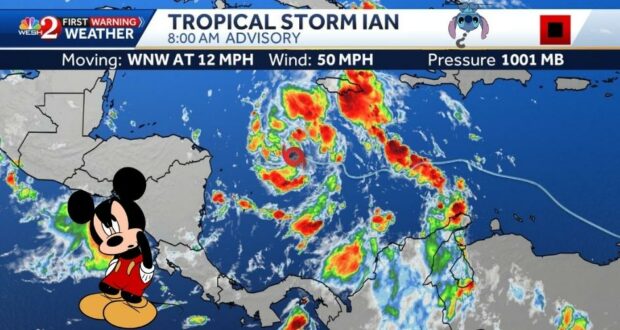 The National Hurricane Center released its 8:00 am advisory on Tropical Storm Ian. Here are the latest updates and how they can affect Disney-bound readers.

“Ian is moving toward the west-northwest near 12 mph (19 km/h). A turn toward the northwest at a similar forward speed is expected later today, followed by a turn toward the north-northwest on Monday and north on Tuesday… Maximum sustained winds are near 50 mph (85 km/h) with higher gusts. Rapid strengthening is forecast to begin later today. Ian is expected to become a hurricane later today or tonight and reach major hurricane strength by late Monday or Monday night before it reaches western Cuba.”

Just like the previous advisory, the track remains further west with landfall now predicted north, northwest of Walt Disney World Resort, Universal Orlando Resort, and the rest of Central Florida. Due its slower speed, Ian is not expected to reach our vicinity until Thursday. 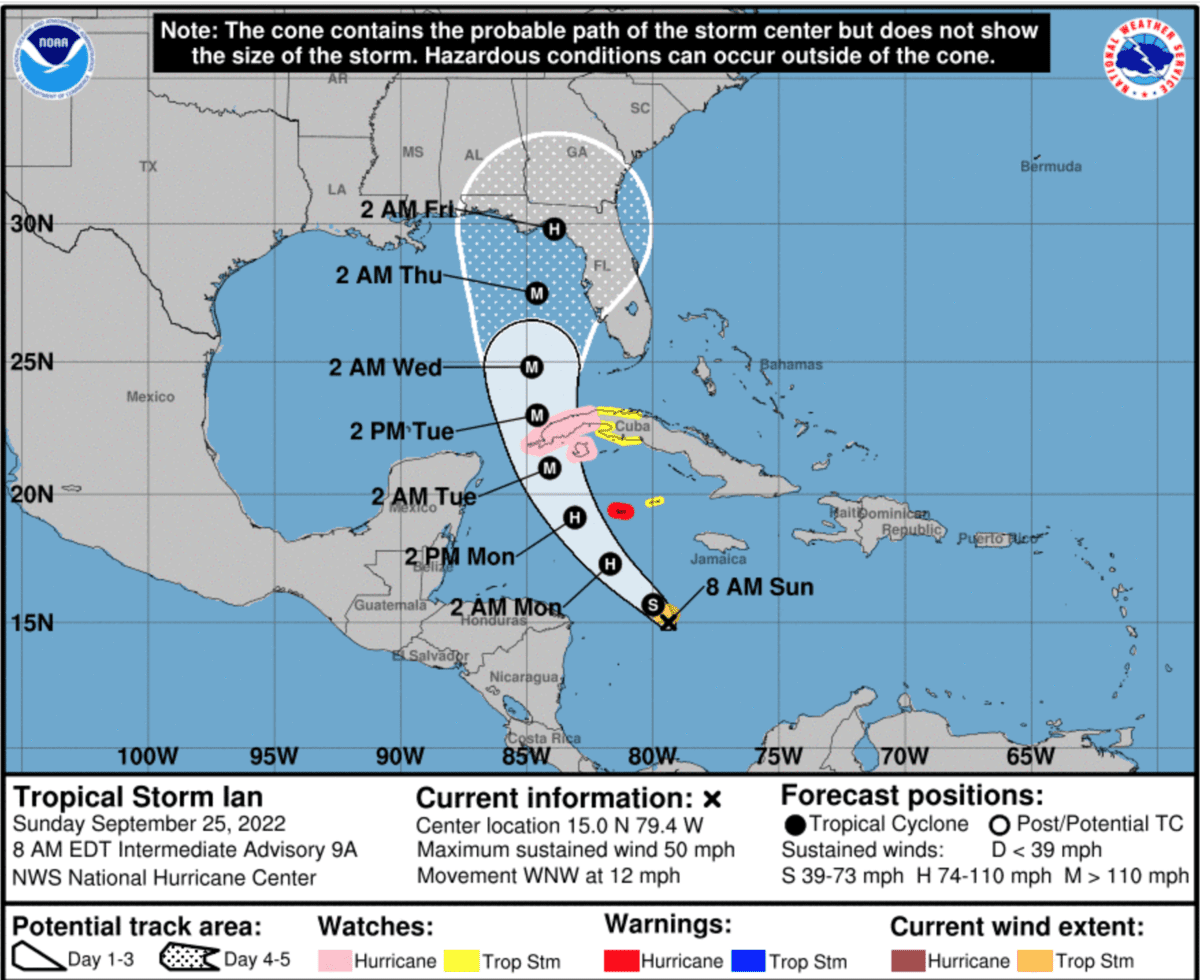 Tropical Storm force winds are now expected to arrive in the Central Florida area late Wednesday as it sits off the Tampa Bay at a Category 3 strength storm.

Because all of Central Florida remains within the “Cone of Uncertainty,” we advise that everyone in the area remain on alert as the days progress. However, we also want to reiterate that there is no safer place to be than a Walt Disney World Resort hotel to wait out any size storm.

Let me be very clear. If you're in the cone (just about all of us), you have an equal chance of having Ian cross over you.

The NHC is very transparent. They long range forecast is NOT set… pic.twitter.com/IYoEHBgm1L

There is still no official word from either Walt Disney World Resort or Disney Cruise Line regarding any change in operations due to Tropical Storm Ian. Severe thunderstorms with tropical storm-forced winds should be expected in the latter half of this coming week for any Parkgoers.

It should also be noted that while Western Caribbean destinations like The Cayman Islands and Cozumel remain in the danger zone, the Eastern Caribbean remains clear, with the Port of Miami completely out of the cone. All immanent Disney Cruise Line Passengers should remain on alert for any last-minute changes to their itineraries.

We at Disney Fanatic will continue to monitor Tropical Storm Ian and how it looks to affect Disney vacations as more developments come to light.