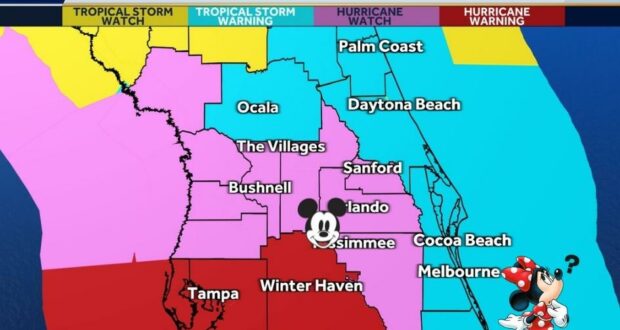 The National Hurricane Center (NHC) released its 11:00 am full advisory on Hurricane Ian. It is still a Category 3 with sustained winds of 115 mph and is still expected to become a Category 4 before making landfall in Florida with a Category 1 Storm potentially knocking on the door of Walt Disney World Resort, Universal Orlando Resort, and the rest of Central Florida Thursday morning.

The NHC has just issued their 11am advisory for #Ian; Here's a look… More of course today on WESH 2 News… pic.twitter.com/s3OLoHdEID

“At 1100 AM EDT (1500 UTC), the center of Hurricane Ian was located near latitude 23.0 North, longitude 83.5 West. Ian is moving toward the north near 10 mph (17 km/h), and this motion is expected to continue today. A turn toward the north-northeast with a reduction in forward speed is forecast tonight and Wednesday… Maximum sustained winds are near 115 mph (185 km/h) with higher gusts. Ian is a category 3 hurricane on the Saffir-Simpson Hurricane Wind Scale. Re-strengthening is expected later today through Wednesday. Ian is forecast to approach the west coast of Florida as an extremely dangerous major hurricane.” 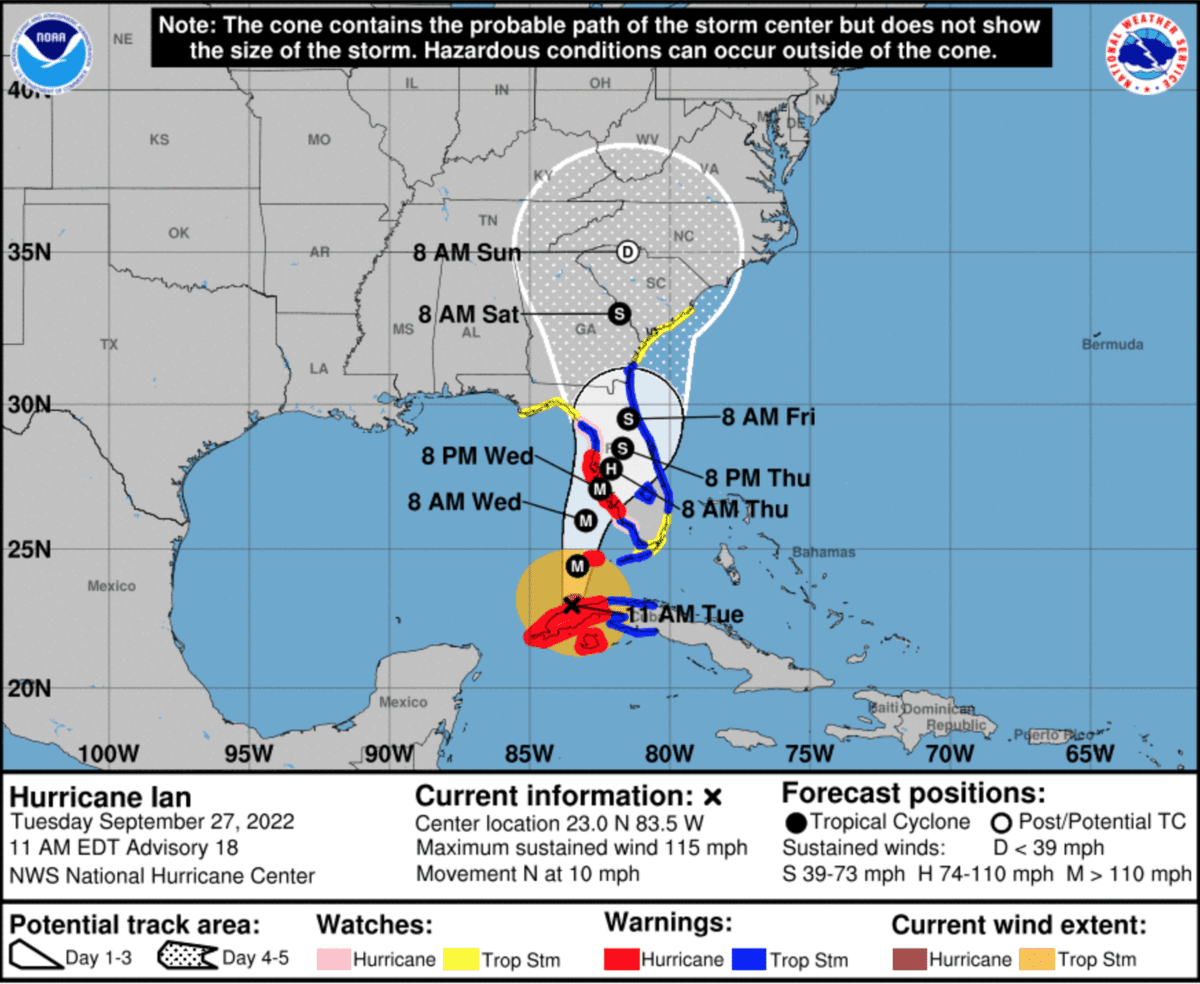 One of the growing concerns now is that Ian is moving very slowly and is expected to slow down even more, which can mean more rainfall for the Sunshine State. The latest track appears to show that Hurricane Ian will make landfall south of Tampa Bay as a Category 3 and then crawl inland at a northeasterly route, potentially bringing Tropical Storm and Hurricane-force winds to Central Florida. The NHC now says that Central-West Florida should prepare for 12 to 16 inches of rain this week, with possible isolated instances of 24 inches. Power outages are also likely to impact the Central Florida Counties in the coming days.

Based on all the data I'm seeing, here's a first look at who I think is at the greatest risk for loosing power;

This will be tweaked, adjusted, etc;

If you're using a generator, REMEMBER, use it outside in a well ventilated area! pic.twitter.com/HBn2g48XY1

A Hurricane Watch is now in effect for Walt Disney World’s Orange and Osceola Counties, which includes the entire Orlando Metro Area, and a Tropical Storm Warning is in place for Disney Cruise Line’s homeport Port Canaveral.

Many comparisons of Hurricane Ian’s behavior have been made by locals to Hurricane Charley, which hit Central Florida and caused Walt Disney World to close in 2004. However, Ian is much bigger than Charley. Here’s a comparison.

In his press conference, the governor @RonDeSantisFL mentioned that this storm is larger than Charley-

Here's a look… TO SCALE… at the difference in size… pic.twitter.com/BDunOLuDer

At the time of this publication, the Walt Disney World Resort officially states:

It cannot be overstated, though, that a Walt Disney World Resort hotel is one of the safest places in which to ride out this impending storm.

We at Disney Fanatic will continue to update our readers on Hurrican Ian and its projected impact on Disney World and the rest of Central Florida as more developments come to light.