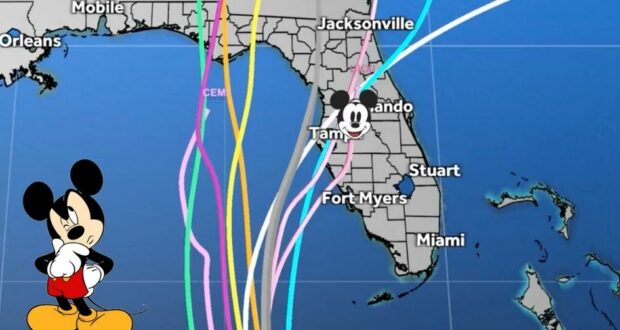 TS Ian Still Low and Slow, But Some Tracks Stay Over Disney World

Earlier reports stated that this storm is going to make a big turn and swing northeast to central Florida. But it has continued its west/northwest course. Earlier reports indicated that we should have seen a hurricane by now. It has not. In fact, Tropical Storm seems a little weaker. But that all could still change in the next 24 hours.

It is still expected to rapidly develop into a Category 4 hurricane with the potential to make landfall as a Category 2 on Thursday. Walt Disney World Resort, Universal Orlando Resort, and the rest of Central Florida remain within the “Cone of Uncertainty.”

“Ian is moving toward the west-northwest near 12 mph (19 km/h). A turn toward the northwest is expected tonight, followed by a north-northwestward motion on Monday and a northward motion on Tuesday with a slightly slower forward speed… Maximum sustained winds are near 45 mph (75 km/h) with higher gusts. Some strengthening is forecast tonight, followed by more rapid strengthening on Monday and Tuesday. Ian is forecast to become a hurricane on Monday and a major hurricane on Tuesday.”

The concerning factor is that it is about to hit a large spot of hot water with very little expected wind sheer, and this can allow Ian to finally grow up into a hurricane and a major one at that.

Meanwhile, the reports that continue to forecast the turn north appear to be split into two camps. One-mostly backing European trajectory models show the would-be hurricane blowing right through Central Florida by way to Tampa Bay. The other, mostly from the American GFS models, show the storm staying offshore and continuing north to the Panhandle.

Here's at look at the models for #IanL. Still a good spread across the Easter Gulf of Mexico but the trend has inched eastward today with two camps setting up. We will get active weather Wednesday/Thursday either way. Stay with @WESH for updates. #weshwx pic.twitter.com/ZgERXBeEt6

Due to this continued uncertainty, most of the Sunshine State remains within the “Cone of Uncertainty,” and people in Central Florida should expect to feel the impacts–wind and rain–by Wednesday or Thursday. A tropical storm watch is now in effect for the Florida Keys, and a State of Emergency remains in effect for the entire State.

The path of Tropical Storm Ian remains uncertain and could have impacts from the Keys to Northwest Florida. Floridians along the Gulf Coast should prepare now for the possibility of severe weather next week.⁰
Follow @FLSERT for the most up-to-date information about the storm. pic.twitter.com/XNmOf8PPwP

The NHC is already predicting Central Florida to receive 2-6 inches of rain between Monday and Wednesday, with Tropical Storm Force Winds expected to arrive by Wednesday evening.

With the 5PM advisory, the timing of tropical storm force winds hasn't changed a whole lot. Still looking like weather will be deteriorating through the day on Wednesday. Tune into @WESH 2 News at 6 for all the latest info! pic.twitter.com/U8kKozjD8B

For those currently staying on Walt Disney World Resort property, please be assured that The Most Magical Place On Earth is one of the safest places to be in the entire State. Many Floridians will make Disney World hotel reservations for the sole purpose of seeking shelter from the storm. Cast Members will ensure that all Guests are kept safe, warm, fed, hydrated, and comfortable. That being said, all would-be Guests should be mindful of the cancellation policies for every aspect of their trip.

Next few days will be days to continue prepping. Remember, if you're in the cone, you need to prep for a possible storm.

We are in a cone… pic.twitter.com/rDrBrj1Jvo

At the time of this article’s publication, we still do not have an official statement from Walt Disney World Resort or Disney Cruise Line regarding any changes to operations due to the projected storm.

We advise all of our readers who are not staying on property to stay calm, gather supplies, and have a hurricane plan ready to go by Wednesday, which can account for sheltering in place if need be.

We at Disney Fanatic will continue to update our readers on Tropical Storm Ian and how it can impact the Theme Park Capital as more developments come to light.