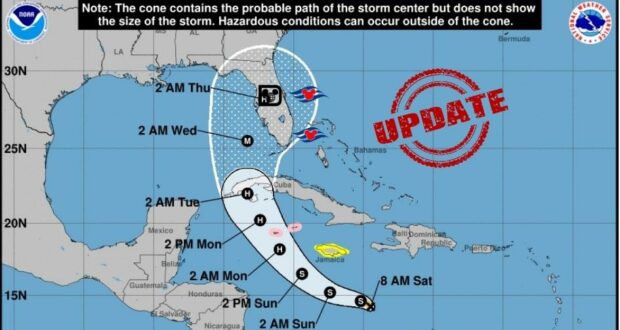 The National Hurrican Center issued an intermediate advisory at 8:00 am EDT this morning showing Tropical Storm Ian has gown by also apparently slowed.

The storm appears to be moving West/Southwest at about 15 mph, with its windspeed increasing to 45 mph sustained. The Cayman Islands remain under a hurricane watch, and South Florida and the Florida Keys could start seeing heavy rains as early as Monday. It is still expected to develop into a Category 3 hurricane by Wednesday in the Gulf of Mexico before weakening slightly as it makes its way inland.

8am #Ian intermediate advisory has been issued; Here's the latest on the storm… pic.twitter.com/m1aoUZxEZ8

But it appears that the storm is not expected to be in the vicinity of Walt Disney World, Universal Orlando Resort, and the rest of South Florida by this coming Thursday, with Tropical Storm-force winds currently expecting to precede it on Wednesday morning. The general vicinity of the Theme Park Capital appears to be in the middle of the “Cone of Uncertainty.” Previous reports had the storm making landfall earlier on Tuesday or Wednesday.

Orange County, where a majority of Walt Disney World Resort is located, has begun official storm preparations, announcing that the Office of Emergency Management is monitoring the storm and opening a free sandbag program for residents looking to keep their homes dry in the event of heavy rains and potential flooding. The other Disney World district, Osceola County, was one of the counties included in Governor Ron DeSantis’ State of Emergency issued yesterday.

NOW OPEN: @OrangeCoFL's Office of Emergency Management is monitoring Tropical Storm Ian. To ensure that residents are prepared for the potential impact of a storm, we have re-opened our free, self-serve sandbag program. Sites open starting today, at 8 a.m. https://t.co/tVzNipWHHA pic.twitter.com/kgLObhzFgc

Over on the Space Coast, speculation rises regarding NASA’s plans with the scheduled Artemis 1 launch, which could further hint at the developing situations with Disney Cruise Line operations at nearby Port Canaveral. While preparations are underway, it is still too early to tell just what kind of impacts Central Florida can expect. All would-be vacationers going to Walt Disney World Resort or a Disney Cruise Line ship at either Port Canaveral or Port of Miami should continue to monitor email and other forms of contact regarding reservations as well as any flights that may be involved for any weather-related updates in the days ahead.

Tropical Storm Ian is currently moving W at 14 mph over the central Caribbean Sea & is forecast to strength into a Major Hurricane as it approaches the FL Peninsula by mid week. It's too early to tell what impacts there will be across E central FL. Review your plans & supplies. pic.twitter.com/YPIFG6KdXi

We at Disney Fanatic will continue to monitor Tropical Storm Ian as more developments come to light.