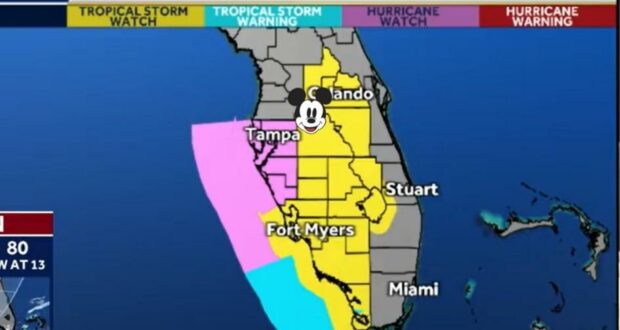 The National Hurricane Center has released its 11:00 am advisory on Hurricane Ian. The storm is getting stronger, and its path toward Central Florida becomes more clear. Winds sustained at 80 mph, it is expected to become a Category 3 by Tuesday, and a Tropical Storm Watch is now in effect for Orange County and Osceola County.

“At 1100 AM EDT (1500 UTC), the center of Hurricane Ian was located near latitude 19.1 North, longitude 82.7 West. Ian is moving toward the northwest near 13 mph (20 km/h). A north-northwestward motion is expected to begin later today, followed by a northward motion on Tuesday with a slightly slower forward speed. A turn toward the north-northeast with a further reduction in forward speed is forecast on Wednesday…Ian will then emerge over the southeastern Gulf of Mexico on Tuesday, pass west of the Florida Keys late Tuesday, and approach the west coast of Florida on Wednesday into Thursday. Maximum sustained winds have increased to near 80 mph (130 km/h) with higher gusts. Rapid strengthening is expected during the next day or so, and Ian is forecast to become a major hurricane tonight or early Tuesday when it is near western Cuba and remain a major hurricane over the southeastern Gulf of Mexico on Wednesday.”

There is still a chance for Hurricane Ian to list either right or left and chose its landing zone, and according to WESH2 meteorologist, that this landing zone variation can have a significant impact on Walt Disney World, Universal Orlando Resort, and the rest of Central Florida. 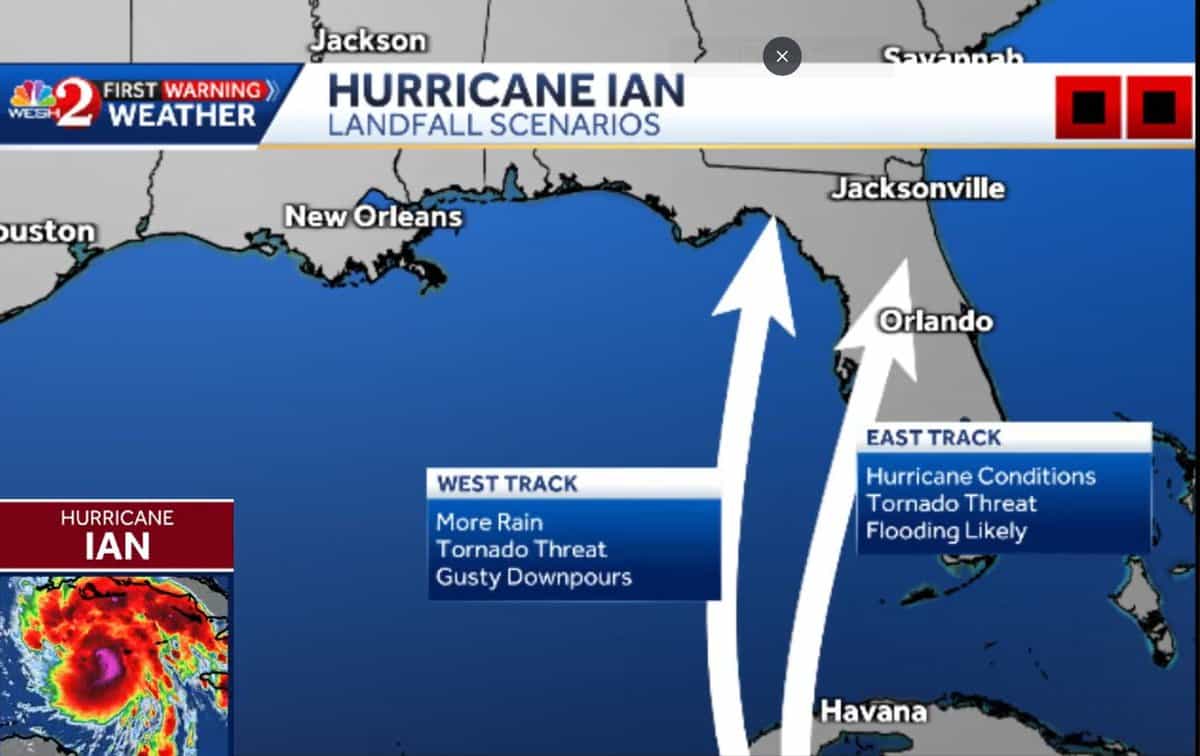 NHC states that “a Tropical Storm Watch means that tropical storm conditions are possible within the watch area, generally within 48 hours.” At this time, there is no significant change to the Disney World weekly forecast we shared earlier this morning.

Over on the East Coast, NASA announced that it would begin rolling back its moon rocket from Launch Pad 39B at Kennedy Space Center to take shelter in the Vehicle Assembly Building. Orlando International Airport also issued a statement earlier.

MCO informed passengers, “We’re closely monitoring the status of Hurricane Ian to identify the potential extent of impact to airport operations. The airport is currently open and operational. Please check with your airline directly in regards to their operations for the most up-to-date flight information.”

We're closely monitoring the status of Hurricane Ian to identify the potential extent of impact to airport operations. The airport is currently open and operational. Please check with your airline directly in regards to their operations for the most up-to-date flight information.

Florida Governor Ron DeSantis also provided an update on the impending hurricane, and we will provide more on that story in a subsequent article to be shared after this update. There is still no official word from Walt Disney World Resort or Disney Cruise Line regarding any operational change due to the weather.

We at Disney Fanatic will continue to update our readers on Hurricane Ian as more developments come to light.