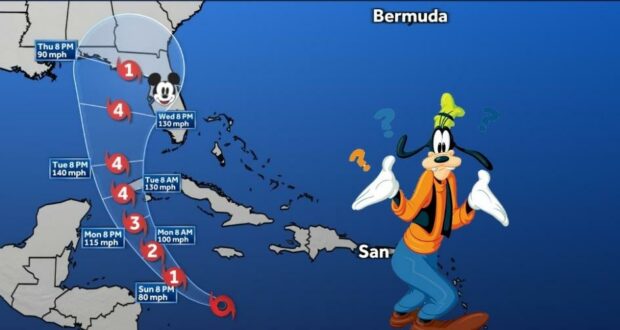 The National Hurricane Center (NHC) has just released its 11:00 pm full advisory concerning Tropical Storm Ian. Here is the latest and how it will affect Disney Vacations.

According to the latest reports, Tropical Storm Ian has intensified, with sustained winds recorded at 50 mph, and the NHC anticipates that it will become a hurricane on Sunday. But Ian continues to be tracking west, slowing from a 16 mph pace to around 13 mph. It still has not made its forecasted turn to the north, but the NHC still expects it to arrive in the Gulf of Mexico by Tuesday.

It appears that the new tracks have released almost half of Florida’s peninsula from the “cone of uncertainty,” and while Ian is still expected to become a Category 4 out at sea, it is expected to weaken to a Category 1 when it makes landfall Thursday night. However, Walt Disney World Resort, Universal Orlando Resort, and the rest of Central Florida are at risk of being affected. Southern Florida and the Florida Keys are also still expected to get multiple inches of rain in the coming days. 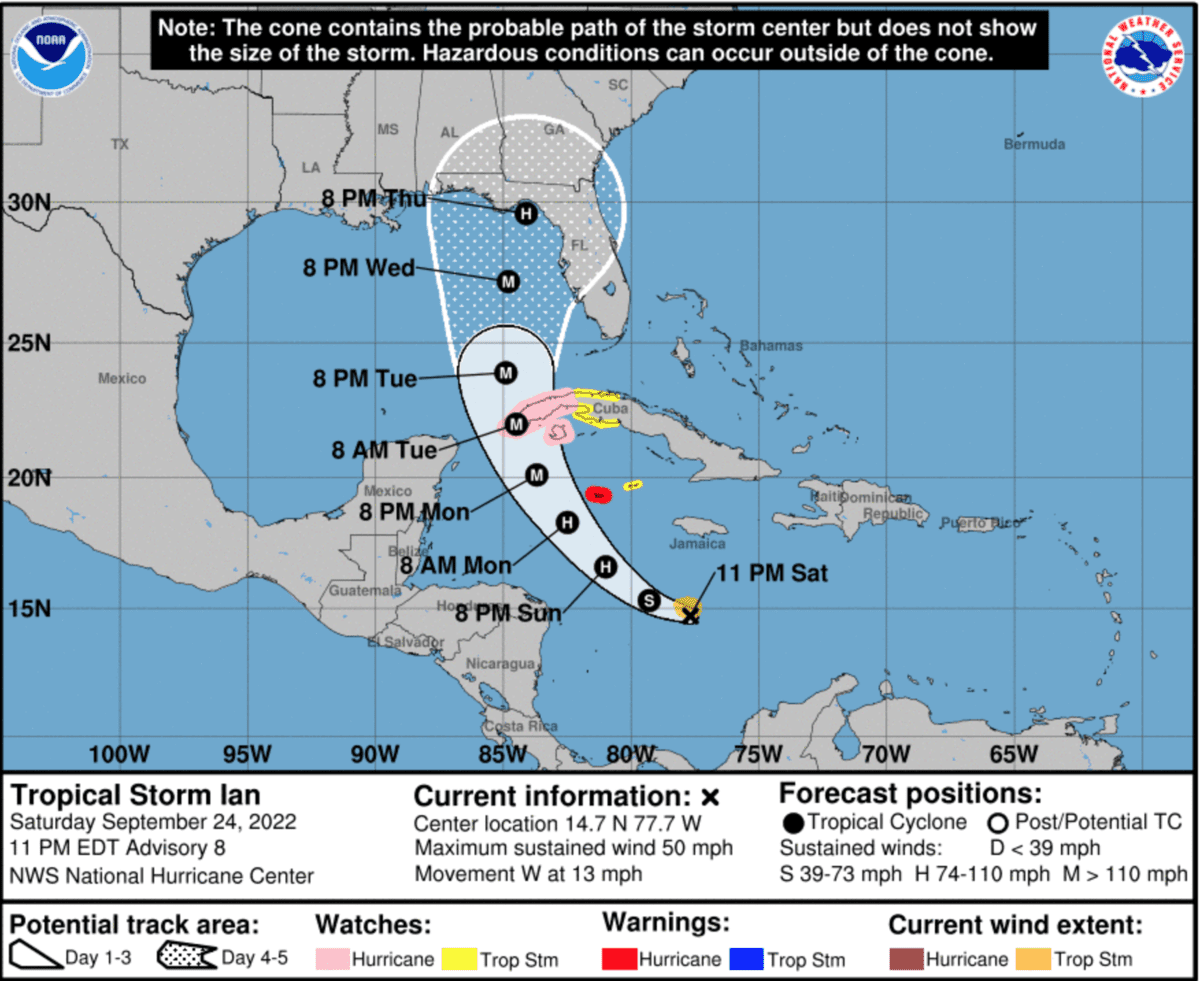 For those planning to arrive at or are currently staying at the Walt Disney World Resort this coming week, relax. You are in one of the safest places in Florida. Would-be and current Guests should be aware, though, that Resort hotels will most likely be at or close to occupancy as local families evacuate their homes to take shelter in superior Disney infrastructure. Universal Orlando Resort hotels could experience the same. Walt Disney World Cast Members will be working around the clock to ensure that you are warm, fed, dry, and comfortable. 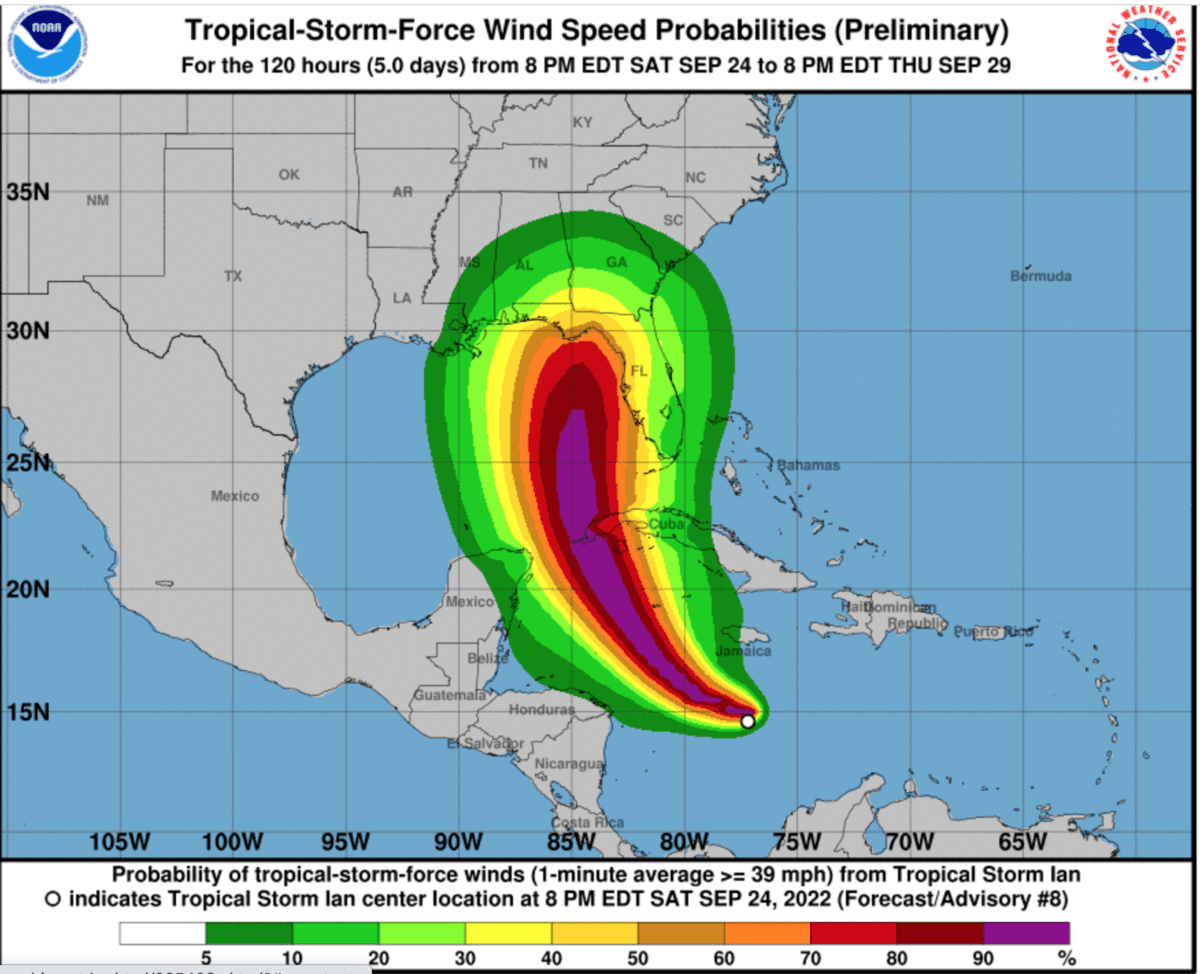 For would-be Disney Cruise Line Guests, Western Caribbean destinations like the Cayman Islands and the Yucatan remain bombarded by this storm, but the Eastern Caribbean appears clear. Miami is now clear of the “cone of uncertainty,” and Port Canaveral is also nearly clear. But we are not out of the woods yet, and there are a lot of unknowns left to consider. And even if it remains offshore, a category 4 hurricane can still send tropical storm force winds and even hurricane force winds and rain to the Disney World Area.

Joe Biden also announced he backed Gov. DeSantis’ now-statewide emergency declaration, activating FEMA and the Department of Homeland Security. Biden was supposed to attend the Democratic National Committee Rally, which was to be held on Walt Disney World Resort property on Wednesday, September 27. But, according to WESH2, both Biden’s visit and the rally have been canceled due to the storm.

At the time of this article’s publication, there is still no word from Walt Disney World or Disney Cruise Line on whether or not this storm will affect normal operations in any way.

We at Disney Fanatic will continue to update our readers on this storm as more developments come to light.