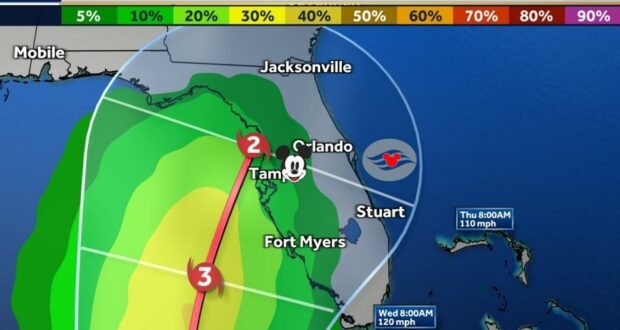 Ian is still cruising at 15mph with 45mph sustained winds with gusts up to 50mph and has still yet to make its turn north. This delay appears to have shifted the track–and more importantly, its landing zone–further north along Florida’s West Coast, putting the center of the “Cone of Uncertainty” directly north of Tampa Bay.

Tropical Storm Ian is still expected to reach Category 3 strength as it enters the Gulf of Mexico by way to Western Cuba but will be on the cusp of a Category 2 by the time it makes landfall on Thursday morning.

Here's the 11 AM closeup cone with #Ian Track is a little farther north along Florida west coast and still a CAT2/CAT3at land fall. Stay with @WESH for updates. #weshwx pic.twitter.com/nlx3j5SQB5

The National Hurricane Center still expects the storm to make a turn north this weekend and then continue on a path that is becoming evermore North-Northwest than West-Northwest. Walt Disney World, Universal Orlando Resort, and the entirety of Central Florida remain within the Cone of Uncertainty, and vacationers and residents alike should still remain on high alert and prepared for a storm with winds between 110 and 120 mph.

Disney Cruise Line passengers should also remain on alert for cancelations and itinerary changes. Before NHC’s latest advisory was released, NASA announced that it was scrubbing the launch attempt of its moon rocket, Artemis I, at Kennedy Space Center, which is in close proximity to Disney Cruise Line’s homeport at Port Canaveral. South Florida and the Florida Keys are also expected to get multiple inches of rain and heavy winds within the next few days. It should be noted that unless Disney Cruise Line informs one individually, all unprotected reservations are non-refundable if a cancellation occurs within 14 days of scheduled departure. 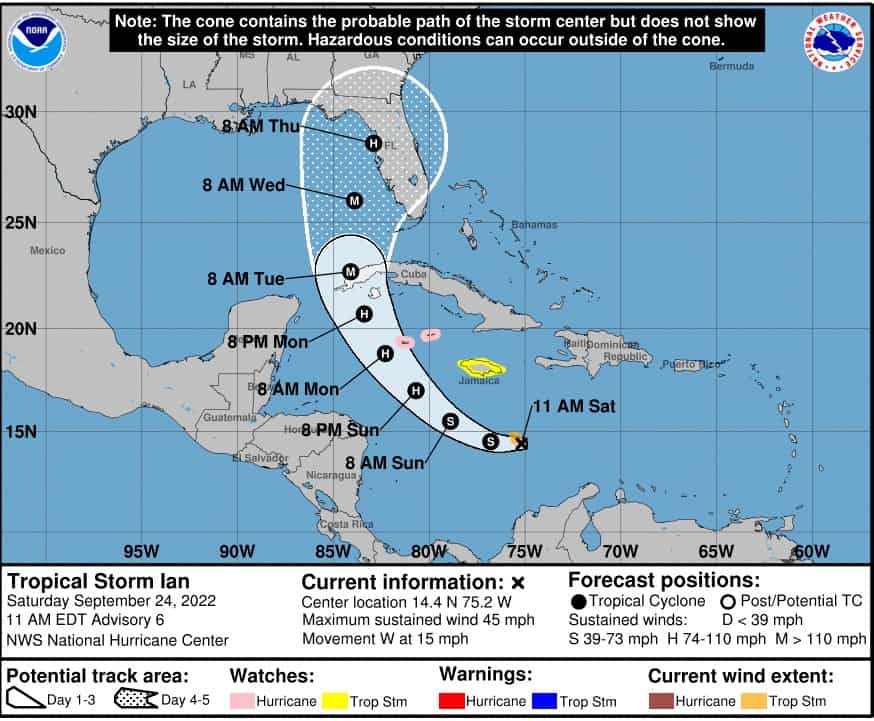 While the storm is not projected to make landfall until Thursday, the storm’s effects and the weather are expected to still arrive in Central Florida by Wednesday with high winds and flood warnings.

We at Disney Fanatic want to reiterate that all Guests at a Walt Disney World Resort hotel will be kept safe, fed, dry, and comfortable throughout this event. Special bits of magic like Character meet n’ greets in hotel lobbies have been known to happen in the past to keep Guests’ spirits high as the storm rages on. Still, please be sure to stay in contact with Disney or your authorized Disney Vacation Planner, as well as any airlines for the most up-to-date information regarding this storm.

At the time of this article’s publication, there has still been no official word from Walt Disney World or Disney Cruise Line regarding any change in operation due to Tropical Storm Ian.

We will continue to update our readers on this storm as more developments come to light.