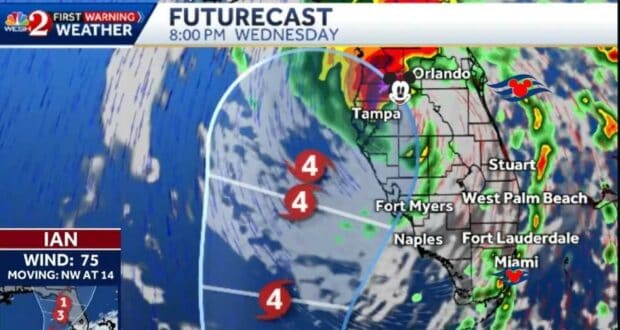 The National Hurricane Center issued its 8:00 am advisory, and Hurricane Ian has finally formed. At this time, it is still a Category 1, but it is expected to grow into a Category 3 by the end of the day, and the worst of the weather is still expected to hit the Disney World area Wednesday and Thursday.

COFFEE TALK: Hurricane Ian is intensifying in the Caribbean Sea. Let's track it, look at local impacts, and answer your questions. Join us! https://t.co/5pi8RcfCSx

“At 800 AM EDT (1200 UTC), the center of Hurricane Ian was located near latitude 18.7 North, longitude 82.4 West. Ian is moving toward the northwest near 14 mph (22 km/h). A turn toward the north-northwest is expected later today, followed by a northward motion on Tuesday with a slightly slower forward speed. A turn toward the north-northeast is forecast on Tuesday night or early Wednesday… Ian will then emerge over the southeastern Gulf of Mexico on Tuesday, pass west of the Florida Keys late Tuesday, and approach the west coast of Florida on Wednesday. Maximum sustained winds are near 75 mph (120 km/h) with higher gusts. Rapid strengthening is expected during the next day or so.”

#Ian is expected to be a major hurricane in the eastern Gulf of
Mexico during the middle of this week. Regardless of Ian’s exact track, there is a risk of a life-threatening storm surge, hurricane-force winds, & heavy rainfall along the west coast/Panhandle of Florida by mid-week pic.twitter.com/koVmW9yrtJ

The consensus is that the storm will be along the Tampa Bay Area as a major hurricane. Outerbands are expected to reach Walt Disney World Resort, Universal Orlando Resort, and the rest of Central Florida. While there is no storm surge expected for the area at this time, flooding is a major concern, as well as high winds and tornadoes.

But according to WESH2 meteorologist Eric Burris, there are still two tracks this storm can take. One that has the storm making landfall south and north of Tampa Bay. The westerly track would bring more rain to the area, while the easterly track could bring hurricane conditions and the entire center of the storm over the Orlando Metro area. 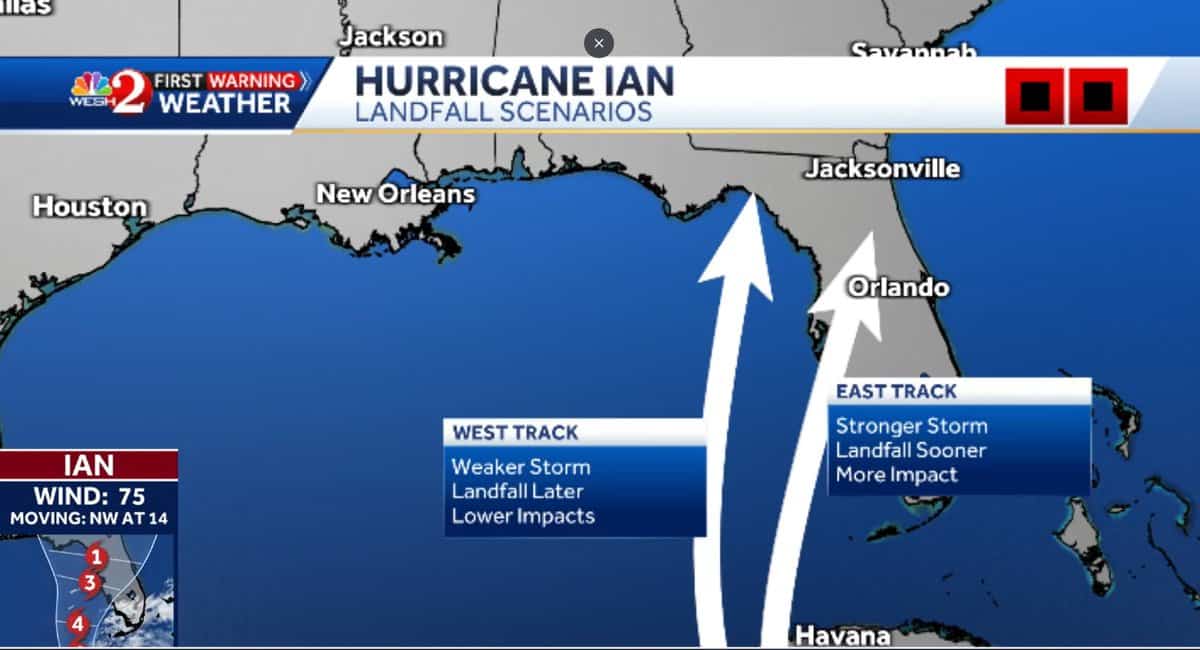 A hurricane is expected to be in the vicinity of Walt Disney World Resort and the Disney Cruise Line Homeport at Port Canaveral. However, there is still no official word from either entity regarding a change in operation due to the weather. It is also unclear whether Orlando International Airport will close or if any of the airlines will begin to preemptively begin canceling flights in and out of the area. We advise all vacationers who have not arrived in the area to familiarize themselves with the cancelation policies.

As we previously promised, here is the current forecast for this week for the Walt Disney World Resort, according to Weather.com. PLEASE keep in mind that a lot can still change throughout the next 24-48 hours, but have a plan ready to execute–even if that plan is to shelter in place at your Disney World Resort hotel.

As of this article’s publication, today and tomorrow, Thunderstorms are expected to develop, but the winds are still low. 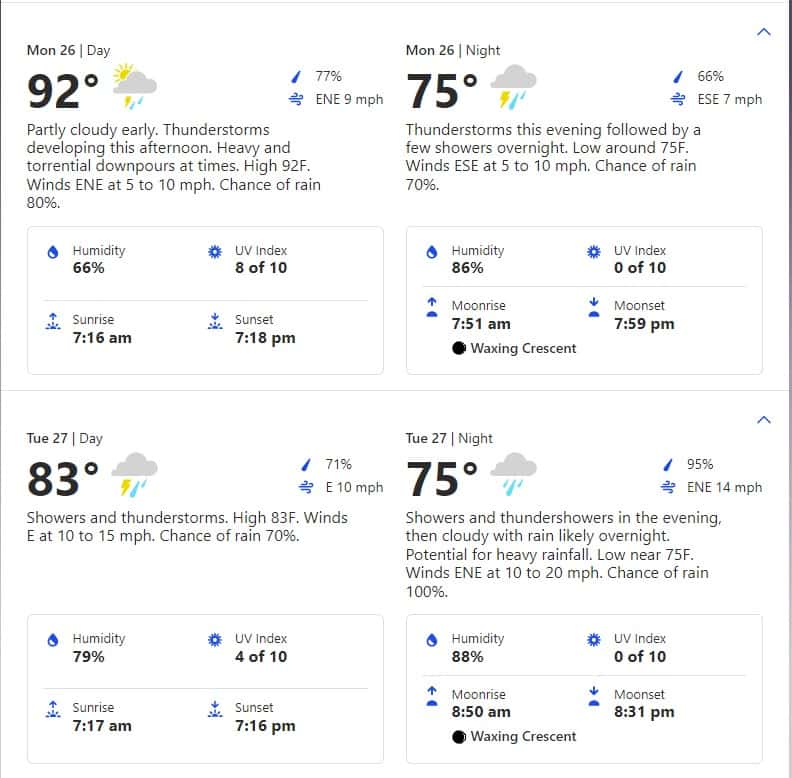 Again, there is still a lot of uncertainty, but AT THIS TIME, Wednesday and Thursday, Central Florida is expecting to have Hurricane Ian closest, and Tropical Storm Force winds are expected, with winds up to 35-40 mph over those two days. 100% chance of rain. But Hurricane-Force winds could also appear. This is where Tornado warnings should also be expected. 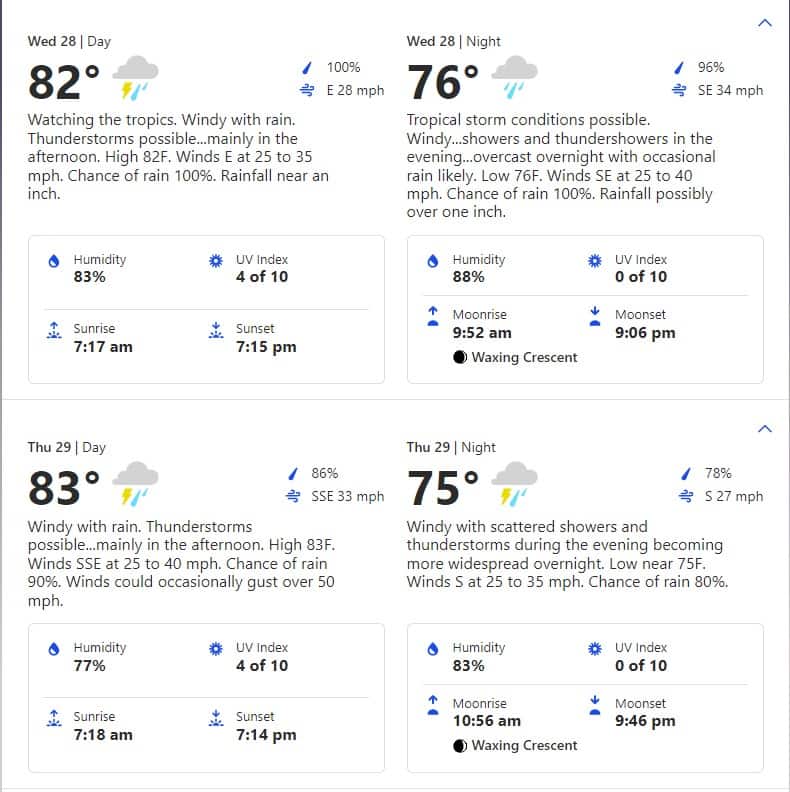 On Friday and Saturday, things are still reportedly going to be stormy but calming down significantly. With a 30% chance of rain expected for the weekend. 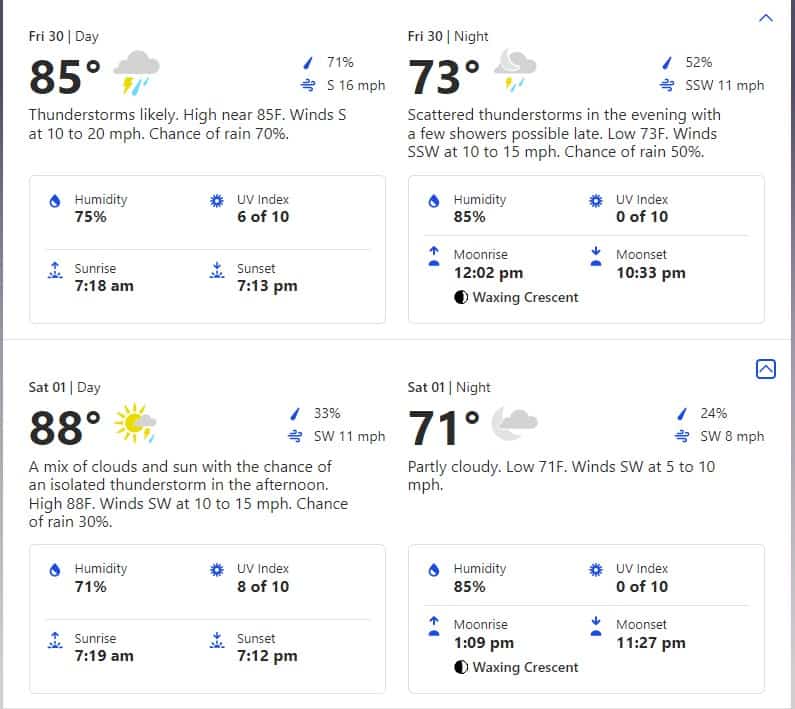 We at Disney Fanatic will continue to update our readers on this storm as it could affect Disney World and Disney Cruise Line vacations, and want to remind our readers that there is no safer place to shelter in place during a hurricane than at a Walt Disney World Resort Hotel.