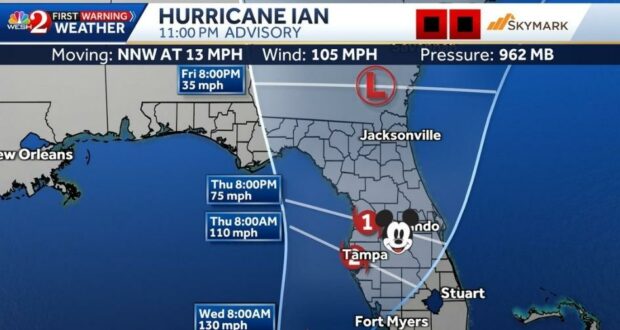 The National Hurricane Center (NHC) has released its 11:00 pm full advisory update on Hurricane Ian. It has gotten slightly stronger, recording winds of 105 mph, and it is expected to evolve into a Major Hurricane overnight. The track also appears to be moving further east and making landfall south of Walt Disney World Resort, Universal Orlando Resort, and the rest of Central Florida.

With the 11pm advisory: the cone has shifted farther east which could means bigger impacts for Central Florida. Meteorologist @alexalecciwesh and @tmainolfiwesh will show you the county by county impacts on @wesh at 11pm. #wesh #weather #ian #hurricane pic.twitter.com/CUyNAXl1Na

At 1100 PM EDT (0300 UTC), the center of Hurricane Ian was located near latitude 21.3 North, longitude 83.4 West. Ian is moving toward the north-northwest near 13 mph (20 km/h). A turn toward the north with a slightly slower forward speed is expected on Tuesday. A turn toward the north-northeast with a further reduction in forward speed is forecast on Wednesday… Maximum sustained winds have increased to near 105 mph (165 km/h) with higher gusts. Rapid strengthening is expected during the next day or so, and Ian is forecast to become a major hurricane overnight or early Tuesday when it is near western Cuba, and remain a major hurricane over the southeastern Gulf of Mexico on Wednesday.

While this storm can still make some changes to its course, visitors and residents of Central Florida should be expecting heavy rains and tropical storm force winds Wednesday-Thursday with high risks of flooding, severe storms, and wind gusts. Tornados could also be a factor. The chance of storm surge remains small.

As the forecast for Hurricane Ian continues to come into focus, our local weather concerns do as well.

For me, BIG rains and the threat for severe storms tops the list.

Sure wind gusts especially out west play in- but tornadoes and flooding are the big worries… pic.twitter.com/iznIQC1X2b

The Walt Disney World Resort recently announced that they are currently tracking the weather system, saying,

At the time of this article’s publication, though, all four Walt Disney World Theme Parks–Magic Kingdom Park, EPCOT, Disney’s Hollywood Studios, and Disney’s Animal Kingdom–are expected to run normal operations. It is still unclear what type of operational change Hurricane Ian will have on Disney Cruise Line.

We at Disney Fanatic will continue to update our readers on Hurricane Ian and how it can effect the Walt Disney World Resort and the rest of Central Florida as more developments come to light.