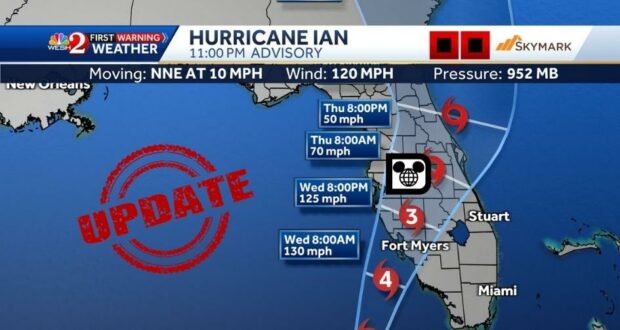 The National Hurricane Center (NHC) has released its 11:00 pm update, and Hurricane Ian has retained its strength and 120 mph winds. The Category 3 Hurricane is set to make landfall on the Florida Peninsula tomorrow, with the center of the storm expected to be over Central Florida.

The advisory states, in part,

“At 1100 PM EDT (0300 UTC), the center of Hurricane Ian was located near latitude 24.9 North, longitude 82.9 West. Ian is moving toward the north-northeast near 10 mph (17 km/h). This general motion with a reduction in forward speed is forecast tonight and Wednesday, followed by a turn toward the north on Thursday. On the forecast track, the center of Ian is expected to pass west of the Florida Keys within the next few hours, and approach the west coast of Florida within the hurricane warning area on Wednesday. The center of Ian is forecast to move over central Florida Wednesday night and Thursday morning and emerge over the western Atlantic by late Thursday.”

Updated look at our advisories around town.

Friends, tomorrow a strong hurricane is going to be making landfall on Florida; We're going to be OK, and will get through this together. I'll see you on air at 2 am… pic.twitter.com/nK2t30Rx3Q

While Hurricane Ian is expected to hit the Florida coast as a major hurricane, it is expected to weaken quickly, deteriorating from a major hurricane to a tropical storm from Wednesday night through Thursday as it passes through Central Florida, the home of Walt Disney World Resort, Universal Orlando Resort, and the Orlando Metro Area.

The track also appears to have moved further east, putting a greater possible effect on Disney Cruise Line’s homeport at Port Canaveral. We recently shared that due to the latest reports, Disney Wish will not return to port for disembarkation as scheduled. It will stay out to sea, away from the storm, until Saturday or even Sunday. Unfortunately, this means that the cruise, which was supposed to begin on Friday, is now canceled. Click our link below to read more about that. 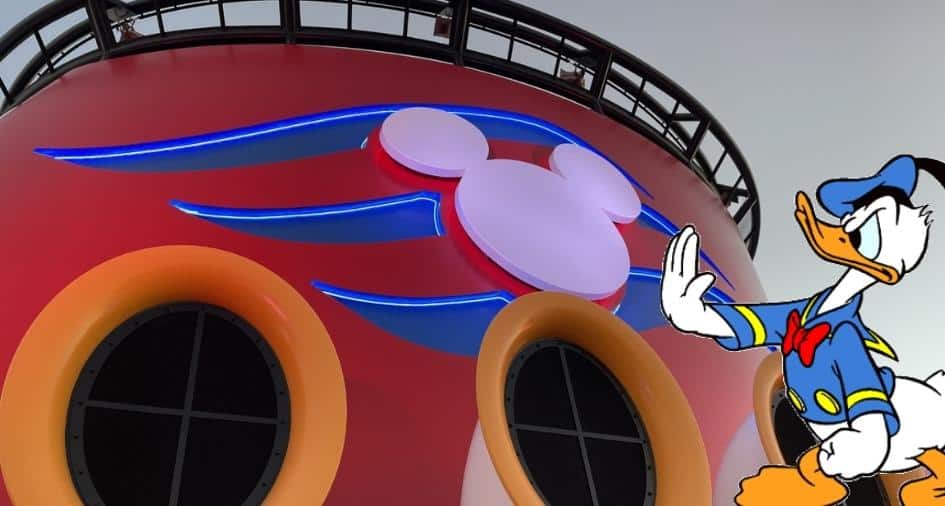 As we previously reported, Orlando International Airport will still be closed to all non-emergency air traffic at 10:30 am tomorrow.

Torrential rain and hurricane-force winds should be expected in the area beginning tomorrow morning, as well as the start of torrential rains that bring risks of flooding and tornadoes. But if you are in a Disney World Resort Hotel, you are safe.

Here are the 11 PM EDT 9/27 Key Messages for Hurricane #Ian. Conditions are expected to continue to deteriorate across central and south Florida tonight. pic.twitter.com/u7rBXatfoH

The storm is expected to pass on Friday. Please stay safe, everyone.

We will continue to update our readers on Hurricane Ian as it begins its final approach through Florida as more developments come to light.