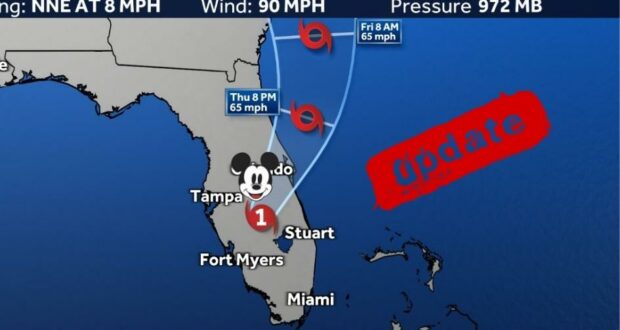 Hurricane Ian is now a Category 1 storm but continues to batter its way slowly across the Florida Peninsula, with Central Florida and the Walt Disney World Resort area still in its sights.

According to the National Hurricane Center’s 11:00 pm advisory,

“Ian is moving toward the north-northeast near 8 mph (13 km/h), and a turn toward the northeast and north is expected during the next couple of days. On the forecast track, the center of Ian is expected to move across central Florida overnight and Thursday morning and emerge over the western Atlantic by late Thursday…Maximum sustained winds have decreased to near 90 mph (150 km/h) with higher gusts. Further weakening is expected for the next day or so.”

At this present time, a massive storm band is delivering heavy rain and high winds to the Theme Park Capital and Orlando Metro Area. 1-2 feet of rain has been expected in the area as well as serious flooding, tornados, and power outages.

Here is the latest radar loop for Ian. Stick with @WESH 2 News for up to the minute updates. pic.twitter.com/AtJoegsJa2

Walt Disney World Resort Guests remain sheltered in place, and all four Theme Parks are expected to be closed for at least Thursday, September 29. It is also expected that Disney Springs will also be closed on Thursday.

Disney Cruise Line has also canceled one cruise that was scheduled to sail out of the currently-closed Port Canaveral on Friday, September 30. At the time of this article’s publication, that cruise appears to be the only one to face cancellation.

Orlando International Airport (MCO) also remains closed to all non-emergency air traffic, and it is unclear when we can expect it to reopen at this time.

We at Disney Fanatic will continue to update our readers on Hurricane Ian and its affect on the Disney World Area as more developments come to light.